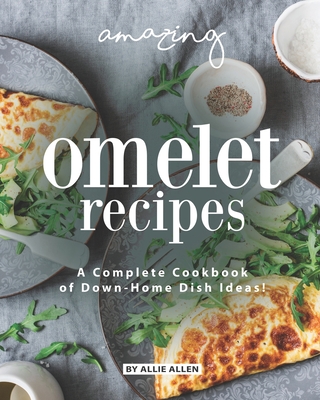 Is there anyone who has ever had omelets and didn't love them? Not that I've heard! Why are these light, tender, egg-based dishes so popular? Because they're uniquely delicious, that's why. Omelets are inexpensive and easy to make, and you can have them any time of day! Originally served mainly as a breakfast dish, omelets are now eaten for lunch, dinner and dessert, too. If you've had lots of omelets before, many were probably based on the original French omelette. They are browned slightly outside, creamy inside, and full of all kinds of ingredients from vegetables to meat, poultry and herbs. Some chefs prepare their fillings first, so they are ready when the omelet is hot. But it's not difficult to keep them warm while you add ingredients for fillings after the omelets cook, either. The eggs used in omelets are whisked with milk and often seasoned with kosher salt and ground pepper if you desire. Unless otherwise stated in a recipe, the whites and yolks are combined well when making an omelet. Read on, and learn more about these mouthwatering recipes!

Food You Can Forage: Edible Plants to Harvest, Cook and Enjoy

Kitchen Remix: 75 Recipes for Making the Most of Your Ingredients: A Cookbook

Friends at My Table: Recipes for a Year of Eating, Drinking, and Making Merry

The Simply Happy Cookbook: 100-Plus Recipes to Take the Stress Out of Cooking

The Vegetarian 5-Ingredient Gourmet: 250 Simple Recipes and Dozens of Healthy Menus for Eating Well Every Day: A Cookbook

Gordon Ramsay's Home Cooking: Everything You Need to Know to Make Fabulous Food

Half Baked Harvest Every Day: Recipes for Balanced, Flexible, Feel-Good Meals: A Cookbook

Cooking with Shereen from Scratch: Because You Can!

Half Baked Harvest Cookbook: Recipes from My Barn in the Mountains

Jacques Pépin Art of the Chicken: A Master Chef's Paintings, Stories, and Recipes of the Humble Bird

The Wok: Recipes and Techniques

Six California Kitchens: A Collection of Recipes, Stories, and Cooking Lessons from a Pioneer of California Cuisine

The Best Grilling Cookbook Ever Written by Two Idiots

Venison Every Day: The No-Fuss Guide to Cooking Game at Home

Magnolia Table, Volume 2: A Collection of Recipes for Gathering

Dessert Person: Recipes and Guidance for Baking with Confidence: A Baking Book

The Complete Soup Cookbook: Over 300 Satisfying Soups, Broths, Stews, and More for Every Appetite

Mi Cocina: Recipes and Rapture from My Kitchen in Mexico: A Cookbook

Home Is Where the Eggs Are

Bake: My Best Ever Recipes for the Classics

Savory Baking: Recipes for Breakfast, Dinner, and Everything in Between

The Unofficial Lord of the Rings Cookbook: From Hobbiton to Mordor, Over 60 Recipes from the World of Middle-Earth

The Cheese Board Deck: 50 Cards for Styling Spreads, Savory and Sweet

Via Carota: A Celebration of Seasonal Cooking from the Beloved Greenwich Village Restaurant: An Italian Cookbook

I Dream of Dinner (So You Don't Have To): Low-Effort, High-Reward Recipes: A Cookbook

The King Arthur Baking School: Lessons and Recipes for Every Baker

The Way Home: A Celebration of Sea Islands Food and Family with Over 100 Recipes

Noodle Worship: Easy Recipes for All the Dishes You Crave from Asian, Italian and American Cuisines

Milk Street: Cook What You Have: Make a Meal Out of Almost Anything (a Cookbook)

New Orleans Cocktails: An Elegant Collection of Over 100 Recipes Inspired by the Big Easy

Cook as You Are: Recipes for Real Life, Hungry Cooks, and Messy Kitchens: A Cookbook

As Cooked on Tiktok: Fan Favorites and Recipe Exclusives from More Than 40 Tiktok Creators! a Cookbook

The Lost Kitchen: Recipes and a Good Life Found in Freedom, Maine: A Cookbook

Nothing Fancy: Unfussy Food for Having People Over

Big Has Home: Recipes from North London to North Cyprus

The Art of the Board: Fun & Fancy Snack Boards, Recipes & Ideas for Entertaining All Year

The Anime Chef Cookbook: 75 Iconic Dishes from Your Favorite Anime

The Golden Girls Cookbook: Cheesecakes and Cocktails!: Desserts and Drinks to Enjoy on the Lanai with Blanche, Rose, Dorothy, and Sophia

Magnolia Table: A Collection of Recipes for Gathering

Together: Our Community Cookbook

The Christmas Movie Cookbook: Recipes from Your Favorite Holiday Films

The Healthy Family Cookbook: 100 Fast and Easy Recipes for the Whole Family

Turkey and the Wolf: Flavor Trippin' in New Orleans [A Cookbook]

The Workweek Lunch Cookbook: Easy, Delicious Meals to Meal Prep, Pack and Take on the Go

The Betty Crocker Cookbook, 13th Edition: Everything You Need to Know to Cook Today

Mastering the Art of French Cooking, Volume I: 50th Anniversary Edition: A Cookbook

Bariatric Meal Prep Made Easy: Six Weeks of Portion-Controlled Recipes to Keep the Weight Off

Isa Does It: Amazingly Easy, Wildly Delicious Vegan Recipes for Every Day of the Week

Cook Anime: Eat Like Your Favorite Character--From Bento to Yakisoba: A Cookbook

The Step-By-Step Instant Pot Cookbook: 100 Simple Recipes for Spectacular Results -- With Photographs of Every Step

The Deliciously Cheesy Cookbook: Over 100 Cheesy Comfort Foods for Every Craving

Lidia's a Pot, a Pan, and a Bowl: Simple Recipes for Perfect Meals: A Cookbook

The Happy in a Hurry Cookbook: 100-Plus Fast and Easy New Recipes That Taste Like Home

Recipes from the World of Tolkien: Inspired by the Legends

The Modern Proper: Simple Dinners for Every Day (a Cookbook)

Cook This Book: Techniques That Teach and Recipes to Repeat: A Cookbook

The Portable USB Blender Smoothie Book: 101 On The Go Smoothies for Your Travel Blender!

The Unofficial Legend Of Zelda Cookbook: From Monstrous to Dubious to Delicious, 195 Heroic Recipes to Restore your Hearts!

101 Greatest Soups on the Planet: Every Savory Soup, Stew, Chili and Chowder You Could Ever Crave

Mushrooming with Confidence: A Guide to Collecting Edible and Tasty Mushrooms

My America: Recipes from a Young Black Chef: A Cookbook

The Complete Italian Cookbook: 200 Classic and Contemporary Italian Dishes Made for the Modern Kitchen

The Düngeonmeister Cookbook: 75 Rpg-Inspired Recipes to Level Up Your Game Night

The Don't Panic Pantry Cookbook: Mostly Vegetarian Comfort Food That Happens to Be Pretty Good for You

The Newlywed Table: A Cookbook to Start Your Life Together

Platters and Boards: Beautiful, Casual Spreads for Every Occasion

The Man Who Mistook His Wife for a Hat: And Other Clinical Tales

Nadiya's Everyday Baking: From Weeknight Dinners to Celebration Cakes, Let Your Oven Do the Work

That Sounds So Good: 100 Real-Life Recipes for Every Day of the Week: A Cookbook

Boards and Spreads: Shareable, Simple Arrangements for Every Meal

Dictator Lunches: Inspired Meals That Will Compel Even the Toughest of (Tyrants) Children

Cooking with Mushrooms: A Fungi Lover's Guide to the World's Most Versatile, Flavorful, Health-Boosting Ingredients

Indian-Ish: Recipes and Antics from a Modern American Family

The Complete Cast Iron Cookbook: A Tantalizing Collection of Over 240 Recipes for Your Cast-Iron Cookware

Masa: Techniques, Recipes, and Reflections on a Timeless Staple

The Elder Scrolls: The Official Cookbook

Gudetama: The Official Cookbook: Recipes for Living a Lazy Life

The I Love Trader Joe's Cookbook: 10th Anniversary Edition: 150 Delicious Recipes Using Favorite Ingredients from the Greatest Grocery Store in the Wo

The Forager's Harvest: A Guide to Identifying, Harvesting, and Preparing Edible Wild Plants

Everyday Dorie: The Way I Cook

How to Eat More Plants: Transform Your Health with 30 Plant-Based Foods Per Week (and Why It's Easier Than You Think)

Binging with Babish: 100 Recipes Recreated from Your Favorite Movies and TV Shows

Date Night Cookbook and Activities for Couples: Recipes and Games for a Romantic Night in

Trejo's Tacos: Recipes and Stories from L.A.: A Cookbook

Milk Street: The World in a Skillet

German Meals at Oma's: Traditional Dishes for the Home Cook

Love Real Food: More Than 100 Feel-Good Vegetarian Favorites to Delight the Senses and Nourish the Body: A Cookbook