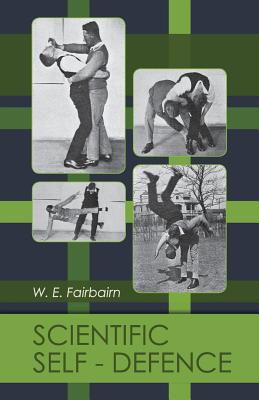 Get tough, get down in the gutter, win at all costs... I teach what is called 'Gutter Fighting.' There's no fair play, no rules except one: kill or be killed. - W.E. Fairbairn

Learn self-defense from one of the most badass hand-to-hand combat experts the world has ever seen!

W. E. Fairbairn is an absolute legend in the world of martial arts. He is credited with inventing the SWAT team, riot police, bullet-proof vest, and the Fairbairn-Sykes fighting knife used to this day by Special Forces, Marines, and Armies around the world. After enlisting in the British Royal Marines at age 16, Fairbairn spent the years between 1903 and 1907 stationed in Japan and Korea eagerly studying every form of martial art he came across. Fairbairn then accepted a position as a patrolman with the Shanghai Municipal Police department, which, in the early days of the 20th Century, was struggling against seemingly endless swarms of organized criminals and violent gangsters. Tasked with training the underfunded department, Fairbairn wove together his military training, mastery of Eastern martial arts, and everything he learned from personal experience street-fighting deadly criminals into a new style of no-holds-barred, 'gutter-fighting' called Defendu. In the 35 years he spent walking the streets of Shanghai, Fairbairn allegedly survived over 600 physical engagements, the violence of which left his body covered head-to-toe with the scars of knife and bullet wounds. Upon leaving Shanghai Fairbairn accepted a job to train elite agents for the British Secret Service in anticipation of WWII.

Written in 1931, after 20 years on the gritty, lawless streets of Shanghai, Scientific Self-Defense is a no-nonsense guide to protecting yourself by any means necessary against any conceivable assailant. With hundreds of diagrams and photos illustrating Defendu's time-honored defensive maneuvers and brutal retaliatory attacks, Scientific Self-Defense will teach you everything you need to know about kicking ass and taking names!

The Tai Chi Companion: A book around Tai Chi