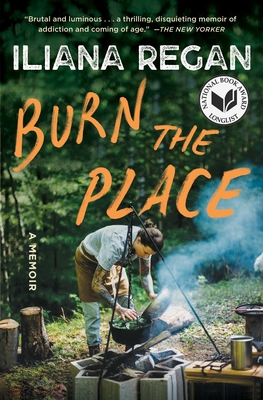 LONGLISTED for the NATIONAL BOOK AWARD A blistering yet tender (Publishers Weekly) memoir that chronicles one chef's journey from foraging on her family's Midwestern farm to running her own Michelin-starred restaurant and finding her place in the world. Iliana Regan grew up the youngest of four headstrong girls on a small farm in Indiana. While gathering raspberries as a toddler, Regan learned to only pick the ripe fruit. In the nearby fields, the orange flutes of chanterelle mushrooms beckoned her while they eluded others. Regan's profound connection with food and the earth began in childhood, but connecting with people was more difficult. She grew up gay in an intolerant community, was an alcoholic before she turned twenty, and struggled to find her voice as a woman working in an industry dominated by men. But food helped her navigate the world around her--learning to cook in her childhood home, getting her first restaurant job at age fifteen, teaching herself cutting-edge cuisine while hosting an underground supper club, and working her way from front-of-house staff to running her own kitchen. Regan's culinary talent is based on instinct, memory, and an almost otherworldly connection to ingredients, and her writing comes from the same place. Raw, filled with startling imagery and told with uncommon emotional power, Burn the Place takes us from Regan's childhood farmhouse kitchen to the country's most elite restaurants in a galvanizing tale that is entirely original, and unforgettable.

Unreasonable Hospitality: The Remarkable Power of Giving People More Than They Expect

To Fall in Love, Drink This: A Wine Writer's Memoir

Savor: A Chef's Hunger for More

A Waiter in Paris: Adventures in the Dark Heart of the City

Dispatches from the Gilded Age: A Few More Thoughts on Interesting People, Far-Flung Places, and the Joys of Southern Comforts

Khabaar: An Immigrant Journey of Food, Memory, and Family

My First Popsicle: An Anthology of Food and Feelings

California Soul: An American Epic of Cooking and Survival

Dessert Can Save the World: Stories, Secrets, and Recipes for a Stubbornly Joyful Existence

My Life in France

Cork Dork: A Wine-Fueled Adventure Among the Obsessive Sommeliers, Big Bottle Hunters, and Rogue Scientists Who Taught Me to Live

Glorious Beef: The Lafrieda Family and the Evolution of the American Meat Industry

It's Not Just Cookies: Stories and Recipes from the Tiff's Treats Kitchen

My Soul Looks Back: A Memoir

Save Me the Plums: My Gourmet Memoir

Warming Up Julia Child: The Remarkable Figures Who Shaped a Legend

Home Cooking: A Writer in the Kitchen

The Devil in the Kitchen: Sex, Pain, Madness, and the Making of a Great Chef

Home Made: A Story of Grief, Groceries, Showing Up--And What We Make When We Make Dinner

The Apprentice: My Life in the Kitchen

Eat Like a Fish: My Adventures Farming the Ocean to Fight Climate Change

Las Abuelas: Stories from Our Kitchens

Wine Girl: The Trials and Triumphs of America's Youngest Sommelier

More Home Cooking: A Writer Returns to the Kitchen

Make It a Double: From Wretched to Wondrous: Tales of One Woman's Lifelong Discovery of Whisky

Shark's Fin and Sichuan Pepper: A Sweet-Sour Memoir of Eating in China

Julia Child: The Last Interview: And Other Conversations

My Place at the Table: A Recipe for a Delicious Life in Paris

At the End of Ceres Street: A Chef's Salute to Portsmouth, New Hampshire

Posts of a Mid-Century Kid

The Next Supper: The End of Restaurants as We Knew Them, and What Comes After

Fresh Off the Boat

My Name Is Joe And I Am A Pizza Man

Make the Bread, Buy the Butter: What You Should (and Shouldn't) Cook from Scratch to Save Time and Money

The Life and Wines of Hugh Johnson

Coming to My Senses: The Making of a Counterculture Cook

Wine Girl: The Trials and Triumphs of America's Youngest Sommelier

Memoir of a Swiss Chef: and how he got to Grass Valley to open his own restaurant

32 Yolks: From My Mother's Table to Working the Line

Last Call at Coogan's: The Life and Death of a Neighborhood Bar

Save Me the Plums: My Gourmet Memoir

Colonel Sanders and the American Dream

The Burger King: A Whopper of a Story on Life and Leadership (for Fans of Company History Books Like My Warren Buffett Bible or Elon Mu

The Kimchi Experiment: Naked Parent Teacher Meetings and Other Exploits of a Canadian in South Korea

Life, on the Line: A Chef's Story of Chasing Greatness, Facing Death, and Redefining the Way We Eat

Italian Cookbook for everyday use.: Delicious and easy-to-follow Italian recipes to celebrate the cuisine the right way (Large Print Edition)

Love, Loss, and What We Ate: A Memoir

The Year of the Goat: 40,000 Miles in Pursuit of Peace, Pastures, and the Perfect Cheese

In the Weeds: Around the World and Behind the Scenes with Anthony Bourdain (Large Print Edition)

Climbing the Mango Trees: A Memoir of a Childhood in India

The Wine Lover's Daughter: A Memoir

My Ackee Tree: A Chef's Memoir of Finding Home in the Kitchen

Rebel Chef: In Search of What Matters

My Kitchen Year: 136 Recipes That Saved My Life: A Cookbook

An Onion in My Pocket: My Life with Vegetables

Appetite for Life: The Biography of Julia Child

Pancakes in Paris: Living the American Dream in France

From Here, You Can't See Paris: Seasons of a French Village and Its Restaurant

The Making of a Chef: Mastering Heat at the Culinary Institute of America

Save Room for Pie: Food Songs and Chewy Ruminations

Sobremesa: A Memoir of Food and Love in Thirteen Courses

Delancey: A Man, a Woman, a Restaurant, a Marriage

The Food Explorer: The True Adventures of the Globe-Trotting Botanist Who Transformed What America Eats

Eating Wildly: Foraging for Life, Love and the Perfect Meal

The Language of Baklava: A Memoir

Coconuts and Collards: Recipes and Stories from Puerto Rico to the Deep South

France Is a Feast: The Photographic Journey of Paul and Julia Child

The Tenth Muse: My Life in Food

Drive-Thru Dreams: A Journey Through the Heart of America's Fast-Food Kingdom

The Land of Ale and Gloom: Discovering the Pacific Northwest

Undercooked: How I Let Food Become My Life Navigator and How Maybe That's a Dumb Way to Live

Hunger: A Memoir of (My) Body

Out of Line: A Life of Playing with Fire

Cork Dork: A Wine-Fueled Adventure Among the Obsessive Sommeliers, Big Bottle Hunters, and Rogue Scientists Who Taught Me to Live (Large Print Edition)

My Berlin Kitchen: Adventures in Love and Life

Bella: My Life in Food

Love in a Tuscan Kitchen: Savoring Life Through the Romance, Recipes, and Traditions of Italy

Where I Come from: Life Lessons from a Latino Chef

I Hear She's a Real Bitch

The Petite Palate Collection: Memoir and Recipes from the Kitchen of S. Jane Parker

Barkat: The Inspiration and the Story Behind One of World's Largest Food Drives Feed India

Cooking as Fast as I Can: A Chef's Story of Family, Food, and Forgiveness

Not a Cookbook: A Confinement Project: My Almost 45 Years in the Restaurant Business

The Korean: Single and Obese: Then Kimchi Changed Everything!

Life from Scratch: A Memoir of Food, Family, and Forgiveness

American Cuisine: And How It Got This Way

The Petite Palate Collection: Memoir and Recipes from the Kitchen of S. Jane Parker

The Gourmands' Way: Six Americans in Paris and the Birth of a New Gastronomy

Eat Like a Fish: My Adventures as a Fisherman Turned Restorative Ocean Farmer

Dining with the Durrells: Stories and Recipes from the Cookery Archive of Mrs Louisa Durrell

A Work in Progress, a Journal

Hungry: Eating, Road-Tripping, and Risking It All with the Greatest Chef in the World

The Gentleman's Companion: Being an Exotic Drinking Book Or, Around the World with Jigger, Beaker and Flask

My Culinary Love Story: How Food and Love Led to a New Life

Hydroponics, Aquaponics, Aeroponics: The Ultimate Guide to Grow your own Hydroponic or Aquaponic or Aeroponic Garden at Home: Fruit, Vegetable, Herbs.

Sirio: The Story of My Life and Le Cirque

Plenty: A Memoir of Food and Family

The Wild Vine: A Forgotten Grape and the Untold Story of American Wine

Pinot Girl: A Family. A Region. An Industry.

One For the Road

Posts of a Mid-Century Kid: Doing My Best, Having Fun

Toast: The Story of a Boy's Hunger

Coming to My Senses: The Making of a Counterculture Cook

Sous Chef: 24 Hours on the Line

The Wise Guy Cookbook: My Favorite Recipes from My Life as a Goodfella to Cooking on the Run

Eightysixed: A memoir about unforgettable men, mistakes, and meals.

Tasting Victory: The Life and Wines of the World's Favourite Sommelier

American Pie: Slices of Life (and Pie) from America's Back Roads

Plenty: A Memoir of Food and Family

To Drink and to Eat: New Edition

Ritz and Escoffier: The Hotelier, the Chef, and the Rise of the Leisure Class

Growing Up Greenpoint: A Kid's Life in 1970s Brooklyn

Season to Taste: How I Lost My Sense of Smell and Found My Way