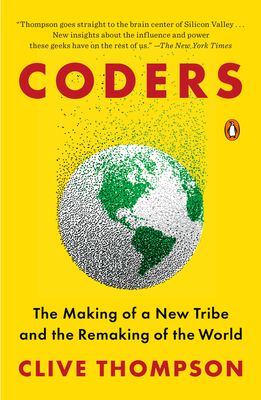 Coders: The Making of a New Tribe and the Remaking of the World

Facebook's algorithms shaping the news. Self-driving cars roaming the streets. Revolution on Twitter and romance on Tinder. We live in a world constructed of code--and coders are the ones who built it for us. Programmers shape our everyday behavior: When they make something easy to do, we do more of it. When they make it hard or impossible, we do less of it. From acclaimed tech writer Clive Thompson comes a brilliant anthropological reckoning with the most powerful tribe in the world today, computer programmers, in a book that interrogates who they are, how they think, what qualifies as greatness in their world, and what should give us pause. In pop culture and media, the people who create the code that rules our world are regularly portrayed in hackneyed, simplified terms, as ciphers in hoodies. Thompson goes far deeper, taking us close to some of the great programmers of our time, including the creators of Facebook's News Feed, Instagram, Google's cutting-edge AI, and more. Speaking to everyone from revered 10X elites to neophytes, back-end engineers and front-end designers, Thompson explores the distinctive psychology of this vocation--which combines a love of logic, an obsession with efficiency, the joy of puzzle-solving, and a superhuman tolerance for mind-bending frustration. Along the way, Coders ponders the morality and politics of code, including its implications for civic life and the economy and the major controversies of our era. In accessible, erudite prose, Thompson unpacks the surprising history of the field, beginning with the first coders -- brilliant and pioneering women, who, despite crafting some of the earliest personal computers and programming languages, were later written out of history. At the same time, the book deftly illustrates how programming has become a marvelous new art form--a source of delight and creativity, not merely danger. To get as close to his subject as possible, Thompson picks up the thread of his own long-abandoned coding skills as he reckons, in his signature, highly personal style, with what superb programming looks like. To understand the world today, we need to understand code and its consequences. With Coders, Thompson gives a definitive look into the heart of the machine.

Confluence: A History of Fort Snelling

Who Ate the First Oyster?: The Extraordinary People Behind the Greatest Firsts in History

How to Astronaut: An Insider's Guide to Leaving Planet Earth

Proof: The Science of Booze

Built: The Hidden Stories Behind Our Structures

A Brief History of Artificial Intelligence: What It Is, Where We Are, and Where We Are Going

Experiments With Alternate Currents Of High Potential And High Frequency

Turing's Cathedral: The Origins of the Digital Universe

Small Inventions That Made a Big Difference

The Third Plate: Field Notes on the Future of Food

Holding Back the River: The Struggle Against Nature on America's Waterways

Future Crimes: Inside the Digital Underground and the Battle for Our Connected World

To Engineer is Human: The Role of Failure in Successful Design

One Giant Leap: The Impossible Mission That Flew Us to the Moon

The History of the Future: Oculus, Facebook, and the Revolution That Swept Virtual Reality

The Distracted Mind: Ancient Brains in a High-Tech World

Archaeology from Space: How the Future Shapes Our Past

The Evolution of Useful Things: How Everyday Artifacts-From Forks and Pins to Paper Clips and Zippers-Came to Be as They Are.

The Weather Machine: A Journey Inside the Forecast

Deep Down Dark: The Untold Stories of 33 Men Buried in a Chilean Mine, and the Miracle That Set Them Free

Chucks!: The Phenomenon of Converse: Chuck Taylor All Stars

One Nation Under Drones: Legality, Morality, and Utility of Unmanned Combat Systems

Commercial Pilot Test Prep 2022: Study & Prepare: Pass Your Test and Know What Is Essential to Become a Safe, Competent Pilot from the Most Trusted So

Nineteen Reservoirs: On Their Creation and the Promise of Water for New York City