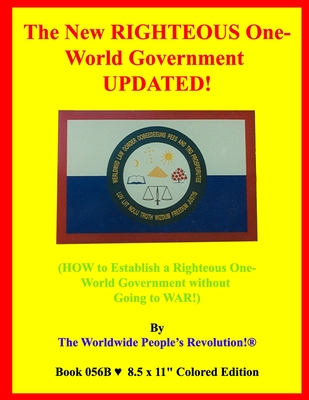 The Updated Version of this Inspired Book is not Designed to Replace the Original Version; but, only to bring it up to Date with what is now Happening. This Edition contains Vital Information, which cannot be Found in the Original Edition, which Reveals HOW to Persuade all of the Nations to VOTE for the Formation of The New RIGHTEOUS One-World Government! (HOW to Establish a Righteous One-World Government without Going to WAR!) By The Worldwide People's Revolution!(R) Book 056. It is actually Revealed in the Book of Daniel, Chapter 2, if you can Believe it, which the Inspired Author has MAGNIFIED! Therefore, have some Patience, and Study it Carefully: beCause, it is a Wonderful and Marvelous Idea, whose Time has now Come to be Implemented. As you saw Iron Mixed with Ceramic Clay, they will Mingle the Seeds of Men with one another; but, they will not Adhere to one another, just as Iron does not Mix Well with Clay. Nevertheless, during the Days of those Wicked Rulers, the God of Heaven will Set Up a Righteous Kingdom, which shall never be Destroyed; and the Government of the Kingdom shall not be left to Ignorant People to Manage it; but, it shall Break into Pieces the Evil Empires, and Consume all of those Kingdoms, and it shall Stand Forever. Therefore, inasmuch as you saw that the Stone was Cut Out of the Mountain without Hands, and that it Broke into Pieces the Iron, the Bronze, the Clay, the Silver, and the Gold ― so shall the Great God of Heaven make known to the Righteous King what will come to pass during the Last Days. The Dream is Certain, and its Interpretation is Sure. And the Stone that Struck the Image became a Great Mountainous Government, and it Filled the Whole Earth with its Righteousness in Holiness.

The Shift to Student-Led: Reimagining Classroom Workflows with UDL and Blended Learning

Awakened: Change Your Mindset to Transform Your Teaching (Second Edition)

The Sh*t They Never Taught You: What You Can Learn From Books

The 5-Ingredient College Cookbook: Easy, Healthy Recipes for the Next Four Years & Beyond

Culture: The Story of Us, from Cave Art to K-Pop

Sweet Potato or Pumpkin Pie: Conversations with My White Friends about Race

Literacy Is Liberation: Working Toward Justice Through Culturally Relevant Teaching

Unearthing Joy: A Guide to Culturally and Historically Responsive Teaching and Learning

Black People Invented Everything: The Deep History of Indigenous Creativity

The Culture Cre8or: A Principal's Journey to Shaping a School's Values, Goals, & BEliefs

Uncommon Sense: Stories About Saving, Investing, and Everything In Between

How to Raise Successful People: Simple Lessons to Help Your Child Become Self-Driven, Respectful, and Resilient