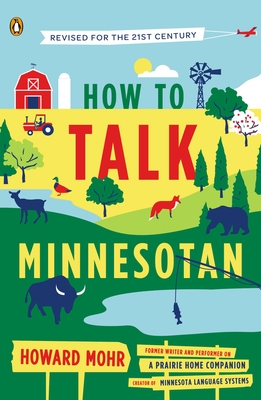 A revised edition of the hilarious Minnesotan culture guide from a former writer for A Prairie Home Companion Fans of the Minnesota-set movie Fargo will love this uproarious culture guide to all-things Minnesotan. With his dry wit and distinctive voice, Howard Mohr won millions of fans across the country on Garrison Keillor's radio show A Prairie Home Companion. His popular commercials and ad spots, including one for Minnesota Language Systems, became the best of the best of Minnesota humor. Now, Mohr has updated his classic guide, How to Talk Minnesotan, to advise visitors on the use of Twitter and Facebook, cell phone etiquette, and more while in the Land of 10,000 Lakes. Ranging in flavor from satiric pungency to lunatic lusciousness, this is glorious, uproarious humor. Or as they say in Minnesota, 'a heckuva deal, you bet.'--Booklist

Capital: Volumes One and Two

The Dangerous Book for Boys

The Anti-Racist Writing Workshop: How to Decolonize the Creative Classroom

The Everything Guide to Micro Weddings: The Ultimate Source for Planning a Small and Meaningful Wedding

How to Build a Fire: And Other Handy Things Your Grandfather Knew

Reading Like a Writer: A Guide for People Who Love Books and for Those Who Want to Write Them

The Call Me Ishmael Phone Book: An Interactive Guide to Life-Changing Books

The Writer Got Screwed (But Didn't Have To): Guide to the Legal and Business Practices of Writing for the Entertainment Indus

The Family Firm: A Data-Driven Guide to Better Decision Making in the Early School Years

The Prepared Graduate: Find Your Dream Job, Live the Life You Want, and Step Into Your Purpose (College Graduation Gift)

The Sentences That Create Us: Crafting a Writer's Life in Prison

Swallowed by a Whale: How to Survive the Writing Life

Creative Demons and How to Slay Them

1,000 Books to Read Before You Die: A Life-Changing List

We Should All Be Feminists: A Guided Journal

Everyone Has What It Takes: A Writer's Guide to the End of Self-Doubt

Making Sense: Conversations on Consciousness, Morality, and the Future of Humanity

How to Start a Side Hustle

The Intellectual Devotional: Revive Your Mind, Complete Your Education, and Roam Confidently with the Cultured Class

Beyoncégraphica: A Graphic Biography of Beyoncé

The Intellectual Devotional: American History: Revive Your Mind, Complete Your Education, and Converse Confidently about Our Na Tion's Past

Author in Progress: A No-Holds-Barred Guide to What It Really Takes to Get Published

The Secret Life of Language: Discover the Origins of Global Communication

Hoyle's Rules of Games, 3rd Revised and Updated Edition: The Essential Guide to Poker and Other Card Games

If You Want to Write: A Book about Art, Independence and Spirit

The Zombie Survival Guide: Complete Protection from the Living Dead

1st Grade Reading Skill Builders Workbook: Activities, Exercises, and Tips to Help Catch Up, Keep Up, and Get Ahead

Unofficial Ancestry.com Workbook: A How-To Manual for Tracing Your Family Tree on the #1 Genealogy Website

Rhyme's Rooms: The Architecture of Poetry

Writer's Market 100th Edition: The Most Trusted Guide to Getting Published

You Too Can Be Prosperous

Democratic Rules of Order: Easy-To-Use Rules for Meetings of Any Size

Hearts Under the Headsets: Enhancing Resilience for Telecommunications Professionals

Ripley's Believe It or Not! Out of the Box