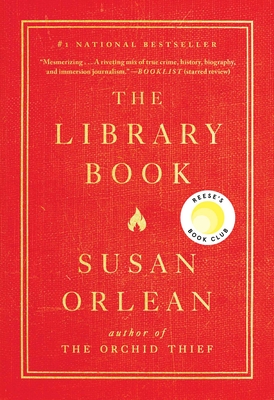 A REESE WITHERSPOON x HELLO SUNSHINE BOOK CLUB PICK A WASHINGTON POST TOP 10 BOOK OF THE YEAR * A NEW YORK TIMES BESTSELLER and NEW YORK TIMES NOTABLE BOOK OF 2018 A constant pleasure to read...Everybody who loves books should check out The Library Book. --The Washington Post CAPTIVATING...DELIGHTFUL. --Christian Science Monitor * EXQUISITELY WRITTEN, CONSISTENTLY ENTERTAINING. --The New York Times * MESMERIZING...RIVETING. --Booklist (starred review) A dazzling love letter to a beloved institution--and an investigation into one of its greatest mysteries--from the bestselling author hailed as a national treasure by The Washington Post. On the morning of April 29, 1986, a fire alarm sounded in the Los Angeles Public Library. As the moments passed, the patrons and staff who had been cleared out of the building realized this was not the usual fire alarm. As one fireman recounted, Once that first stack got going, it was 'Goodbye, Charlie.' The fire was disastrous: it reached 2000 degrees and burned for more than seven hours. By the time it was extinguished, it had consumed four hundred thousand books and damaged seven hundred thousand more. Investigators descended on the scene, but more than thirty years later, the mystery remains: Did someone purposefully set fire to the library--and if so, who? Weaving her lifelong love of books and reading into an investigation of the fire, award-winning New Yorker reporter and New York Times bestselling author Susan Orlean delivers a mesmerizing and uniquely compelling book that manages to tell the broader story of libraries and librarians in a way that has never been done before. In The Library Book, Orlean chronicles the LAPL fire and its aftermath to showcase the larger, crucial role that libraries play in our lives; delves into the evolution of libraries across the country and around the world, from their humble beginnings as a metropolitan charitable initiative to their current status as a cornerstone of national identity; brings each department of the library to vivid life through on-the-ground reporting; studies arson and attempts to burn a copy of a book herself; reflects on her own experiences in libraries; and reexamines the case of Harry Peak, the blond-haired actor long suspected of setting fire to the LAPL more than thirty years ago. Along the way, Orlean introduces us to an unforgettable cast of characters from libraries past and present--from Mary Foy, who in 1880 at eighteen years old was named the head of the Los Angeles Public Library at a time when men still dominated the role, to Dr. C.J.K. Jones, a pastor, citrus farmer, and polymath known as The Human Encyclopedia who roamed the library dispensing information; from Charles Lummis, a wildly eccentric journalist and adventurer who was determined to make the L.A. library one of the best in the world, to the current staff, who do heroic work every day to ensure that their institution remains a vital part of the city it serves. Brimming with her signature wit, insight, compassion, and talent for deep research, The Library Book is Susan Orlean's thrilling journey through the stacks that reveals how these beloved institutions provide much more than just books--and why they remain an essential part of the heart, mind, and soul of our country. It is also a master journalist's reminder that, perhaps especially in the digital era, they are more necessary than ever.

Popular Culture in the Age of White Flight: Fear and Fantasy in Suburban Los Angelesvolume 13

Twilight Man: Love and Ruin in the Shadows of Hollywood and the Clark Empire

The Earth Is All That Lasts: Crazy Horse, Sitting Bull, and the Last Stand of the Great Sioux Nation

Jaialdi: A Celebration of Basque Culture

We Pointed Them North: Recollections of a Cowpuncher

American Wolf: A True Story of Survival and Obsession in the West

Detours: A Decolonial Guide to Hawai'i

The Dreamt Land: Chasing Water and Dust Across California

Stealing Home: Los Angeles, the Dodgers, and the Lives Caught in Between

Man of the Family

San Francisco Pilgrimage: Memoir of a Lifelong Love Affair with My City: My

An American Genocide: The United States and the California Indian Catastrophe, 1846-1873

Chief Joseph & the Flight of the Nez Perce: The Untold Story of an American Tragedy

The Slickrock Desert: Journeys of Discovery in an Endangered American Wilderness

Murder Capital of the World

Captive Paradise: A History of Hawaii

Disney's Land: Walt Disney and the Invention of the Amusement Park That Changed the World

Beyond the Betrayal: The Memoir of a World War II Japanese American Draft Resister of Conscience

Mexifornia: A State of Becoming

San Francisco Then and Now(r)

Secret San Jose: A Guide to the Weird, Wonderful, and Obscure

Pretty-Shield: Medicine Woman of the Crows

The Mirage Factory: Illusion, Imagination, and the Invention of Los Angeles

The Bears Ears: A Human History of America's Most Endangered Wilderness

The Grizzly in the Driveway: The Return of Bears to a Crowded American West

The Earth Is All That Lasts: Crazy Horse, Sitting Bull, and the Last Stand of the Great Sioux Nation (Large Print Edition)

Set the Night on Fire: L.A. in the Sixties

Fire and Brimstone: The North Butte Mining Disaster of 1917

Los Angeles Then and Now

Fire in Paradise: An American Tragedy

The Best Land Under Heaven: The Donner Party in the Age of Manifest Destiny

Roar of the Sea: Treachery, Obsession, and Alaska's Most Valuable Wildlife

Secret Monterey: A Guide to the Weird, Wonderful, and Obscure

The Death and Life of Monterey Bay: A Story of Revival

The Tao of Raven: An Alaska Native Memoir

Colorado's Highest: The History of Naming the 14,000-Foot Peaks

A Misplaced Massacre: Struggling Over the Memory of Sand Creek

The War of the Copper Kings: Greed, Power, and Politics

History of California: A Captivating Guide to the History of the Golden State, Starting from when Native Americans Dominated through European

City of Inmates: Conquest, Rebellion, and the Rise of Human Caging in Los Angeles, 1771-1965

Blood of the Prophets: Brigham Young and the Massacre at Mountain Meadows

Burning the Breeze: Three Generations of Women in the American West

The Valley of Heart's Delight: True Tales from Around the Bay

Cowboys, Mountain Men, and Grizzly Bears: Fifty of the Grittiest Moments in the History of the Wild West

The Lost World of the Old Ones: Discoveries in the Ancient Southwest

Los Angeles: The Development, Life, and Structure of the City of Two Million in Southern California

The Town that Said 'Hell, No!': Crested Butte Fights a Mine to Save its Soul

Birthing the West: Mothers and Midwives in the Rockies and Plains

Empire of Shadows: The Epic Story of Yellowstone

Black Cowboys of the Old West: True, Sensational, and Little-Known Stories from History

Alaska's History, Revised Edition: The People, Land, and Events of the North Country

Stealing Home: Los Angeles, the Dodgers, and the Lives Caught in Between

Death at the Cecil Hotel in Los Angeles

The Story of Hollywood: An Illustrated History

The Widowed Ones: Beyond the Battle of the Little Bighorn

This Is Chance!: The Great Alaska Earthquake, Genie Chance, and the Shattered City She Held Together

This Land: How Cowboys, Capitalism, and Corruption Are Ruining the American West

Butch Cassidy: The True Story of an American Outlaw

Los Angeles. Portrait of a City

Lewis and Clark Among the Nez Perce: Strangers in the Land of the Nimiipuu

Tahoe Beneath the Surface: The Hidden Stories of America's Largest Mountain Lake

Hollywood Tiki: Film in the Era of the Pineapple Cocktail

Kaiser Steel of Fontana: Together We Build

Surf and Rescue: George Freeth and the Birth of California Beach Culture

Fire on the Mountain: The True Story of the South Canyon Fire

Secret Sonoma: A Guide to the Weird, Wonderful, and Obscure

Death Valley and the Amargosa: A Land of Illusion

San Diego Lowriders: A History of Cars and Cruising

In Search of the Racial Frontier: African Americans in the American West 1528-1990

American Mafia: The Rise and Fall of Organized Crime In Las Vegas

Alcatraz: A History of the Penitentiary Years

The Father of Glacier National Park: Discoveries and Explorations in His Own Words

River of Lost Souls: The Science, Politics, and Greed Behind the Gold King Mine Disaster

Arrowheads and Stone Artifacts: A Practical Guide for the Amateur Archaeologist

A Passion for Nature: The Life of John Muir

To Live and Dine in L.A.: Menus and the Making of the Modern City / From the Collection of the Los Angeles Public Library

Killdozer: The True Story of the Colorado Bulldozer Rampage

Montana Historic Places on the National Register: From Banks and Barns to Bridges and Battlefields

Hell on Wheels: Wicked Towns Along the Union Pacific Railroad