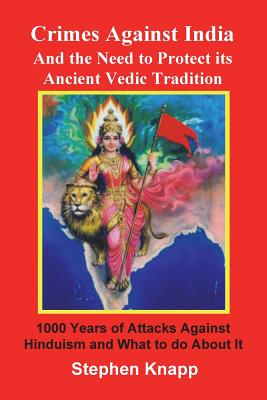 Crimes Against India: And the Need to Protect its Ancient Vedic Tradition: 1000 Years of Attacks Against Hinduism and What to do About it

India is a most resilient country and is presently becoming a great economic power in the world. It also has one of the oldest and dynamic cultures the world has ever known, but few people seem to understand the many trials and difficulties that the country has faced, or the present problems India is still forced to deal with in preserving the culture of the majority Hindus who live in the country. This is described in the real history of the country, which a decreasing number of people seem to recall.
Therefore, this book is to honor the efforts that have been shown by those in the past who fought and worked to protect India and its culture, and to help preserve India as the homeland of a living and dynamic Vedic tradition of Sanatana-dharma (the eternal path of duty and wisdom).
There are also many people who do not know of the many angles and ways in which this profound heritage is being attacked and threatened today, and what we can do about it. There is much to do to protect this culture, and until we are aware of how it has been assaulted in the past, and how it is threatened in the present, we will not have the motivation to take a stand and defend it for its future.
Therefore, some of the topics included are: - How there is a war against Hinduism and its yoga culture.- The weaknesses of India that allowed invaders to conquer her.- Lessons from India's real history that should not be forgotten. - The atrocities committed by the Muslim invaders, and how they tried to destroy Vedic culture and its many temples, and slaughtered thousands of Indian Hindus. - How the British viciously exploited India and its people for its resources.- How the cruelest of all Christian Inquisitions in Goa tortured and killed thousands of Hindus. - Action plans for preserving and strengthening Vedic India.- How all Hindus must stand up and be strong for Sanatana-dharma, and promote the cooperation and unity for a Global Vedic Community.
In the darkest of eras that this world has seen and will see in the future, the Vedic tradition, the culture of yoga, will remain India's gift to the people who inhabit this planet. It is this spiritual culture of Sanatana-dharma that remains the spiritual guide of humanity. This is the reason why India is here, and for the contribution that she makes, and the reason why we must work to protect it.

Yoga and the Quest for the True Self

Bhagavad-Gita As It Is

Wheels of Life: A User's Guide to the Chakra System

The Untold Story of Sita: An Empowering Tale for Our Time

Sing, Dance and Pray: The Inspirational Story of Srila Prabhupada Founder-Acharya of Iskcon

The Psychology of Kundalini Yoga: Notes of the Seminar Given in 1932 by C. G. Jung

Tantric Yoga and the Wisdom Goddesses

Mudras of India: A Comprehensive Guide to the Hand Gestures of Yoga and Indian Dance

Dhammapada: The Sayings of the Buddha

The Great Work of Your Life: A Guide for the Journey to Your True Calling

The Inner Work: An Invitation to True Freedom and Lasting Happiness

The Book of Secrets: 112 Meditations to Discover the Mystery Within

The Yoga of the Bhagavad Gita: An Introduction to India's Universal Science of God-Realization

Bhagavad-Gita: The Song of God

The 112 Meditations From the Book of Divine Wisdom: The meditations from the Vijnana Bhairava Tantra, with commentary and guided practice

Living Your Yoga: Finding the Spiritual in Everyday Life

The Gospel Of Ramakrishna

The Vedas: The Samhitas of the Rig, Yajur, Sama, and Atharva [single volume, unabridged]

Chakra Healing For Beginners: 7 Chakras Meditation Techniques and Spiritual Exercises to Heal Yourself

Myths of the Asanas: The Stories at the Heart of the Yoga Tradition

Awakening Shakti: The Transformative Power of the Goddesses of Yoga

Rukmini and the Turning of Time: The Dawn of an Era

The Seven Spiritual Laws of Yoga: A Practical Guide to Healing Body, Mind, and Spirit

The Ramayana: A Modern Retelling of the Great Indian Epic

Hinduism: What You Need to Know about the Hindu Religion, Gods, Goddesses, Beliefs, History, and Rituals

The Little Book of Hindu Deities: From the Goddess of Wealth to the Sacred Cow

Essential Chakra Yoga: Poses to Balance, Heal, and Energize the Body and Mind

Shakti Rising: Embracing Shadow and Light on the Goddess Path to Wholeness

The Gita: Wisdom from Bhagavad Gita

Why I Am a Hindu

Mudras for Awakening the Five Elements

Vedic Astrology for Beginners: An Introduction to the Origins and Core Concepts of Jyotish

The Yoga of Snakes and Arrows: The Leela of Self-Knowledge [With Fold Out Gameboard]

The Yoga of Power: Tantra, Shakti, and the Secret Way

Why God Permits Evil and How to Rise Above It (Japanese)

Shakti: An Exploration of the Divine Feminine

The Bhagavad Gita: A Walkthrough for Westerners

The Little Book of Changes: A Pocket I-Ching

India: A History. Revised and Updated

The Upanishads: Breath from the Eternal

The Complete Life of Krishna: Based on the Earliest Oral Traditions and the Sacred Scriptures

Kundalini and the Chakras: Evolution in This Lifetime: A Practical Guide

Amma Tell Me about Holi!

A Seeker's Guide to the Yoga Sutras: Modern Reflections on the Ancient Journey

The Upanishads, 1st Us Edition

Chequebook of the Bank of Faith - Burgundy

The Dharma in Difficult Times: Finding Your Calling in Times of Loss, Change, Struggle, and Doubt

In Praise of the Goddess: The Devimahatmya and Its Meaning

The Garland of Letters: Studies in the Mantra-&#346;astra

Tracing the Path of Yoga: The History and Philosophy of Indian Mind-Body Discipline

Sovereign Self: Claim Your Inner Joy and Freedom with the Empowering Wisdom of the Vedas, Upanishads, and Bhagavad Gita

Vivekachudamani of Shankaracharya: the Fiery Crest-Jewel of Wisdom

Be as You Are: The Teachings of Sri Ramana Maharshi

The Tree of Yoga

The Only Dance There Is: Talks at the Menninger Foundation, 1970, and Spring Grove Hospital, 1972

Why God Permits Evil and How to Rise Above It

The Hindus: An Alternative History

The Manitous: Supernatural World of the Ojibway, the

The Heart of Awareness: A Translation of the Ashtavakra Gita

The Upanishads: A New Translation by Vernon Katz and Thomas Egenes

Indian Mythology: Tales, Symbols, and Rituals from the Heart of the Subcontinent

Shakti: Realm of the Divine Mother

The Spiritual Teaching of Ramana Maharshi

The Journey Within: Exploring the Path of Bhakti

Yoga Mythology: 64 Asanas and Their Stories

Shiva: Stories and Teachings from the Shiva Mahapurana

Hinduism For Kids: Beliefs And Practices

Kali: The Black Goddess of Dakshineswar

Ramayana: A Tale of Gods and Demons

Amma Tell Me about Krishna!: Part 1 in the Krishna Trilogy

The Seven Steps to Awakening

The Yoga-Sutra of Patanjali: A New Translation with Commentary

Kundalini: The Arousal of the Inner Energy

The Wings of Joy: Finding Your Path to Inner Peace

Bhakti Yoga: Tales and Teachings from the Bhagavata Purana

The Bhagavad-Gita For Children: and Beginners in Simple English

The Wisdom of the Vedas

Inner Peace: How to Be Calmly Active and Actively Calm

The Bhagavad Gita According to Gandhi

The Shakti Coloring Book: Goddesses, Mandalas, and the Power of Sacred Geometry

Women and Sabarimala: The Science behind Restrictions

The Theory Of Mind As Pure Act

The Wisdom of Yoga: A Seeker's Guide to Extraordinary Living

The Splendor of Recognition: An Exploration of the Pratyabhijna-Hrdayam, a Text on the Ancient Science of the Soul

Ashtavakra Gita - The Heart of Awareness: A bilingual edition in Sanskrit and English

Kriya Yoga for Self-Discovery: Practices for Deep States of Meditation

Hollywood to the Himalayas: A Journey of Healing and Transformation

The Science of the Rishis: The Spiritual and Material Discoveries of the Ancient Sages of India

Caste, Conversion A Colonial Conspiracy: What Every Hindu and Christian must know about Caste

The Teachings of Shri Vallabhacharya

Yoga Mythology: 64 Asanas and Their Stories