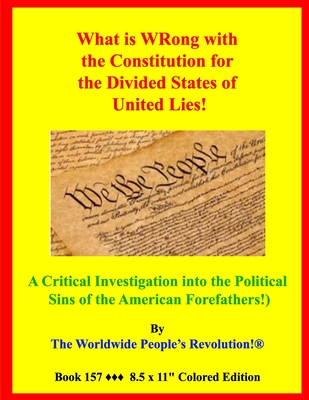 What is WRong with the Constitution for the Divided States of United Lies?: (A Critical Investigation into the Political Sins of the American Forefath

Some Abused People, in this World of Woes, might Rightly Ask: What is NOT WRong with the Constitution for The Divided States of United Lies! (The so-called United States of North America in Disguise!) Book 058? BeCause, they have been Murdered in Various Ways, Drugged with Poisons, and Fed all Kinds of Abominations, which was Surely NOT the Intentions of our Founding Fathers, whose Words are still Breathing Down the Backs of our Necks, you might say, as if they were Watching Over us, just to Discover what their Spiritual Children might Do with Freedom, Liberty, and Justice for NONE! Yes, we are Sure that many of them would have been Happy to Write the Words of GOD, if only he had Spoken to them with a LOUD Clear Voice, or even with a Still Small Voice, as he Spoke to Elijah the Prophet, whose Goal in Life was to get RID of those Deceived BAAL Worshipers, who were the Possession Worshipers, who Thot more Highly of their Vain Things, than they Thot of GOD, who is All that is GOOD. Indeed, they would Gladly give their Lives to Save their Country, which was Actually NOT their Own: beCause, they Robbed it, and took it by Force of Arms, by Deceptions and Lies, whose Treaties were as Worthless as their own Dung, to them. However, they Paved a Way for the Baby Truth to be Born, and he Finally Grew Up into a Strong Young Man, who put all of them to Open Shame: beCause of Listening to the Voice of the Holy Spirit, who Knew all along what is RIIT and Good for Mankind. But, would People Listen to her Voice? Would they Obey their own Consciences? Would they Liv to See the Second Coming of the Supreme Ruler and Divine Lawmaker, who Intends to Establish The New RIGHTEOUS One-World Government! (HOW to Establish a Righteous One-World Government without Going to WAR!) By The Worldwide People's Revolution!(R) Book 056? Well, this Inspired Book Reveals HOW, if anyone is Interested in it. Most People are NOT: beCause, they have Sold their Souls Down the River into Eternal Slavery, to the Chief Liar and Slave Master, called Satan, the Devil, who no more Cares for their Welfare nor Happiness, than the Fake Trumpeter Cared for the Welfare of the Poor Refugees at the Southern Border, who were only Begging for some Useful Tools, whereby they could Build their own Beautiful Planned City States in their own Countries, which would Naturally Require a few Dollars; but, not much more than the Trump Tower in New York City, which Rich Capitalists Managed to Afford for the Sake of Ungodly Gain, who could have also Invested their Money in those GLORIOUS Swanky Hotels Castles and Fortresses! (Beautiful Planned City States for WISE Intelligent Well-Educated People with Common Sense and Good Understanding!) Book 019B, had they been Filled with Love and Compassion for their Naaberz, whom they are Supposed to Love just as much as themselves. After all, what else is Money Good for, if it cannot be Used Wisely for making everyone Moderately RICH, and without Selling any Capitalist Trash, nor Telling any Outlandish LIES? Would they Teach any such Provable Truths in The Public School of IGNERUNT FQLZ! (HOW we have been GRAATLEE DISEEVD by Capitalism!) Book 024B? NO, never! Because, it would not be Profitable for those Greedy Selfish HOGS! Therefore, Elijah came to get RID of them with The Swanky Sword of Divine Truths! (The Most-Powerful Weapon in the Whole Universe!) Book 067. Therefore, will you Readers Help him to Accomplish his God-given Task, as you should, O Righteous Men, O Lovers of Provable Truths; or, will you Fight Against that Sharp Sword of Divine Truths, and Find yourself at the Far End of your own Rope of Hopelessness? We, the People of an EVIL Capitalist Empire, BEG you to Study this Inspired Book, whereby you can be Liberated from the Prison of Lies, and Delivered into your own Beautiful Swanky PALACES! (A New Concept in Living Habits - Swanky Palaces for Poor People!) By The Worldwide People's Revolution!(R) Book 066. Amen! Let it be So!