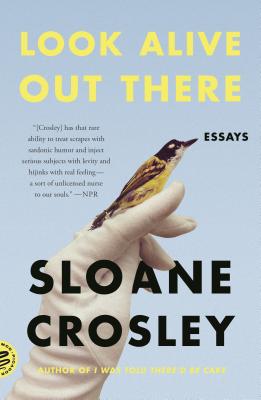 Sloane Crosley returns to the form that made her a household name in really quite a lot of households: Essays!

From the New York Times-bestselling author Sloane Crosley comes Look Alive Out There--a brand-new collection of essays filled with her trademark hilarity, wit, and charm. The characteristic heart and punch-packing observations are back, but with a newfound coat of maturity. A thin coat. More of a blazer, really. Fans of I Was Told There'd Be Cake and How Did You Get This Number know Sloane Crosley's life as a series of relatable but madcap misadventures. In Look Alive Out There, whether it's scaling active volcanoes, crashing shivas, playing herself on Gossip Girl, befriending swingers, or staring down the barrel of the fertility gun, Crosley continues to rise to the occasion with unmatchable nerve and electric one-liners. And as her subjects become more serious, her essays deliver not just laughs but lasting emotional heft and insight. Crosley has taken up the gauntlets thrown by her predecessors--Dorothy Parker, Nora Ephron, David Sedaris--and crafted something rare, affecting, and true. Look Alive Out There arrives on the tenth anniversary of I Was Told There'd be Cake, and Crosley's essays have managed to grow simultaneously more sophisticated and even funnier. And yet she's still very much herself, and it's great to have her back--and not a moment too soon (or late, for that matter).

Vive La Revolution: A Stand-Up History of the French Revolution

Do You Mind If I Cancel?: (Things That Still Annoy Me)

Vegan Food for the Rest of Us: Recipes Even You Will Love

36 Arguments for the Existence of God: A Work of Fiction

Brunch Is Hell: How to Save the World by Throwing a Dinner Party

The Hidden Power of F*cking Up

Guys Can Be Cat Ladies Too

Have a Little Pun: An Illustrated Play on Words (Book of Puns, Pun Gifts, Punny Gifts)

Pot Psychology's How to Be: Lowbrow Advice from High People

Dear Luke, We Need to Talk, Darth: And Other Pop Culture Correspondences

Silas Marner: The Weaver of Raveloe

Sh!t No One Tells You: A Guide to Surviving Your Baby's First Year

Ali's Well That Ends Well: Tales of Desperation and a Little Inspiration

Bark to the Future: A Chet & Bernie Mystery

This Is Going to Hurt [Tv Tie-In]: Secret Diaries of a Young Doctor

Has Anyone Seen My Toes?

Escape Into Meaning: Essays on Superman, Public Benches, and Other Obsessions