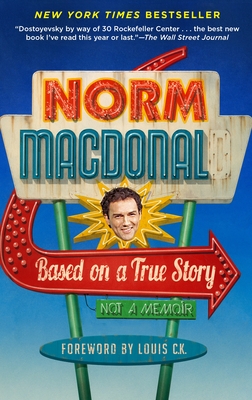 NEW YORK TIMES BESTSELLER - Driving, wild and hilarious (The Washington Post), here is the incredible memoir of the actor, gambler, raconteur, and Saturday Night Live veteran. Don't miss Norm's new Netflix special, Hitler's Dog, Gossip & Treachery! When Norm Macdonald, one of the greatest stand-up comics of all time, was approached to write a celebrity memoir, he flatly refused, calling the genre one step below instruction manuals. Norm then promptly took a two-year hiatus from stand-up comedy to live on a farm in northern Canada. When he emerged he had under his arm a manuscript, a genre-smashing book about comedy, tragedy, love, loss, war, and redemption. When asked if this was the celebrity memoir, Norm replied, Call it anything you damn like. Praise for Based on a True Story
Dostoyevsky by way of 30 Rockefeller Center . . . the best new book I've read this year or last.--The Wall Street Journal This book is absurd fiction. . . . Scathing and funny.--The New York Times Hilarious and filled with turns of phrase and hidden beauty like only a collection of Norm Macdonald stories could be.--Esquire Raucous . . . a hilarious, innovative work.--A.V. Club Part personal history and part meta riff on celebrity memoirs, the book, it quickly becomes clear, is also just partly true (and all hilarious).--Vulture Very, very, very funny! Thanks, Norm, for letting me be part of this Booker Prize-for-literature-quality effort.--David Letterman Norm is brilliant and thoughtful and there is sensitivity and creative insight in his observations and stories. A lot of comics over the years have been compared to Mark Twain, but I think Norm is the only one who actually matches the guy in terms of his voice and ability. I seriously f**king love Norm Macdonald. Please buy his book. He probably needs the cash. He's really bad with money.--Louis C.K., from the foreword Norm is one of my all-time favorites, and this book was such a great read I forgot how lonely I was for a while.--Amy Schumer I always thought Normie's stand-up was the funniest thing there was. But this book gives it a run for its money.--Adam Sandler Norm is one of the greatest stand-up comics who's ever worked--a totally original voice. His sense of the ridiculous and his use of juxtaposition in his writing make him a comic's comic. We all love Norm.--Roseanne Barr

Norm Macdonald makes me laugh my ass off. Who is funnier than Norm Macdonald? Nobody.--Judd Apatow Norm Macdonald is more than a triple threat--he's a septuple threat. He is smart, funny, wry, rakish, polite, rakish . . . no, wait. He is polite, insightful, and . . . aaaaah . . . warm. No. He's exciting. Yeah. Exciting! You never know what he'll do. Okay, then make that unpredictable. Add that up. He's amazing.--Alec Baldwin Norm is a double threat. His material and timing are both top-notch, which is unheard of. He is one of my favorites, both on- and off-stage.--Dave Attell Letterman said it best: There is no one funnier than Norm Macdonald.--Rob Schneider