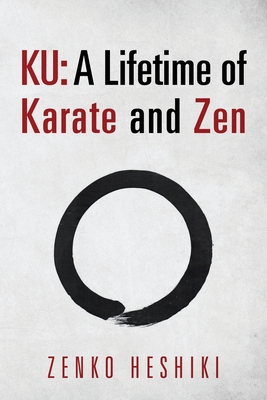 Okinawa, October 10, 1944, a six-year old boy was awakened by the deafening blasts of an aerial bombardment. Terrified, frozen with fear on all fours, he could not find his mother. During the chaos of invasion, then occupation, the family survived but was separated with one of the family members tragically lost. Miraculously, they were reunited and after the war migrated to Argentina where they lived peacefully.

The young boy, Zenko Heshiki, now a grown man went to New York to study engineering but soon began studying Karate and assisted in teaching classes. In his own words: I don't remember having a particular interest in Karate when I started. Nevertheless, in 1966 he decided to open a dojo. The more he studied, the more he read books on martial arts philosophy; however, the more he read serious texts by D.T. Suzuki, Miyamoto Musashi, and Yamaoka Tesshu, he realized that his Karate practice was lacking; something vital was missing. In 1968, anxiously, he travelled to Okinawa in search of a teacher who he found in Master Shoshin Nagamine, founder of Shorin-Ryu Matsubayashi. It was during this time that Heshiki Sensei realized what had been missing in his Karate practice: Zen, more specifically zazen (sitting meditation).

Back in New York, with a renewed enthusiasm, Heshiki Sensei integrated zazen into the Karate curriculum. From this point on, and continuing for decades he trained intensely in New York, Okinawa and Hawaii where he and his family moved to in 1977. Sensei Heshiki found Chozen-ji International Zen Dojo in Honolulu, taught Karate classes, and trained under two Roshis (Zen masters), Tanouye Tenshin and Dogen Hosokawa.

In the author's own words: The reason I decided to write this book is to share my experiences of Karate-Do shugyo (forging of mind/body/spirit through zazen) with sincere practitioners of Karate throughout the world who, through the years of strict and hard physical conditioning, discovered with nagging inquest that there must be more to Karate than mere self-defense or tournament sport. With his deepening understanding of his teacher's dictum, Ken Zen Ichi Nyo (Karate and Zen as One), he gave seminars in New York, Ohio, Hawaii, Florida, Argentina, Uruguay, and the Dominican Republic.

In 1993, the young terrified boy who had survived the horrors of war, relocation to a foreign country, adapting to a new culture and its language was ordained in Hawaii as a Zen priest in the Rinzai sect of Zen with the Buddhist name, Genshin Zenko. In his new role as a priest, he became even more resolute to bring Tao (Chinese), Do (Japanese) meaning Way to the world.

Painting Can Save Your Life: How and Why We Paint

The Untamed Elemental: A 52-Card Oracle Deck and Guidebook

The Golden Number: Pythagorean Rites and Rhythms in the Development of Western Civilization

The Yoga Life: Applying Comprehensive Yoga Therapy to All Areas of Your Life

Body Mindful Yoga: Create a Powerful and Affirming Relationship with Your Body

The Scent of Lemon & Rosemary: Working Domestic Magick with Hestia

The Light We Give: How Sikh Wisdom Can Transform Your Life

How Are You, Really?: Living Your Truth One Answer at a Time

Getting Through It: Reclaim & Rebuild Your Life After Adversity, Change, or Trauma

The Creative Tarot: A Modern Guide to an Inspired Life

The Path to Love: Spiritual Strategies for Healing

Illuminations of Hildegard of Bingen

A Mystical Practical Guide to Magic: Instructions for Seekers, Witches & Other Spiritual Misfits

The American Book of Living and Dying: Lessons in Healing Spiritual Pain

Yoga by the Stars: Practices and Meditations Inspired by the Zodiac

The Good Energy Book: Creating Harmony and Balance for Yourself and Your Home

Trance Journeys of the Hunter-Gatherers: Ecstatic Practices to Reconnect with the Great Mother and Heal the Earth

Five Minutes to a Mindful You: A Guided Journal for Self-Reflection

The Yoga Sutras of Patanjali: The Essential Yoga Texts for Spiritual Enlightenment

Our Tarot: A Guidebook and Deck Featuring Notable Women in History [With Book(s)]

Psychedelics and Spirituality: The Sacred Use of Lsd, Psilocybin, and Mdma for Human Transformation

The Complete Language of Herbs: A Definitive and Illustrated History

The Immortality Key: The Secret History of the Religion with No Name

F*ck Anxiety: 101 Ways to Soothe Anxiety, Stop the Panic + Get Back to Your Badass Self

Finding Home Within the Heart of the Earth: Creating a Harmonious Space with the Energy of the Earth

Called to Be Creative: A Guide to Reigniting Your Creativity

Healing Collective Trauma: A Process for Integrating Our Intergenerational and Cultural Wounds

The Yoga Almanac: 52 Practices and Rituals to Stay Grounded Through the Astrological Seasons

Arthurian Magic: A Practical Guide to the Wisdom of Camelot

My Life in Plants: Flowers I've Loved, Herbs I've Grown, and Houseplants I've Killed on the Way to Finding Myself

The Secret Therapy of Trees: Harness the Healing Energy of Forest Bathing and Natural Landscapes

The Return of Collective Intelligence: Ancient Wisdom for a World Out of Balance

The Divine Design: The Untold Story of Earth's and Humanity's Evolution in Consciousness

The Life-Changing Power of Intuition: Tune in to Yourself, Transform Your Life

Urban Faery Magick: Connecting to the Fae in the Modern World

Wisdomkeepers of Stonehenge: The Living Libraries and Healers of Megalithic Culture

The Art of Spiritual Healing: Chakra and Energy Bodywork

The Secret History of Consciousness: Ancient Keys to Our Future Survival

The Way of the Wizard: Twenty Spiritual Lessons for Creating the Life You Want

The Tutankhamun Prophecies: The Sacred Secret of the Maya, Egyptians, and Freemasons

The Biology of Belief: Unleashing the Power of Consciousness, Matter, and Miracles

The Hidden Messages in Water

The Human Touch: Our Part in the Creation of a Universe

Bringing Yoga to Life: The Everyday Practice of Enlightened Living

Auras: See Them in Only 60 Seconds!

Arching Backward: The Mystical Initiation of a Contemporary Woman

Field: The Quest For the Secret Force of the Universe

The Chalice of Magdalene: The Search for the Cup That Held the Blood of Christ

The Teachings of Don Carlos: Practical Applications of the Works of Carlos Castaneda

Tales of a Modern Sufi: The Invisible Fence of Reality and Other Stories

Pendulum Power: A Mystery You Can See, a Power You Can Feel

The Goddess in the Gospels: Reclaiming the Sacred Feminine

Becoming Supernatural: How Common People Are Doing the Uncommon

The Call of Soul [With CD (Audio)]

Can't Hurt Me: Master Your Mind and Defy the Odds - Clean Edition

Sacred Woman: A Guide to Healing the Feminine Body, Mind, and Spirit

The Secret Life of Plants: A Fascinating Account of the Physical, Emotional, and Spiritual Relations Between Plants and Man

The Witch's Book of Self-Care: Magical Ways to Pamper, Soothe, and Care for Your Body and Spirit

Green Witchcraft: A Practical Guide to Discovering the Magic of Plants, Herbs, Crystals, and Beyond

Zeitgeist 2025: Countdown to the Secret Destiny of America... the Lost Prophecies of Qumran, and the Return of Old Saturn's Reign

Brighter by the Day: Waking Up to New Hopes and Dreams

Runes: Unlock the Secrets of the Stones

Don't Believe Everything You Think: Why Your Thinking Is The Beginning & End Of Suffering

The Crowded Table: The Brave and Beautiful Choice to Mother Many

Badass Habits: Cultivate the Confidence, Boundaries, and Know-How to Upgrade Your Life

The Illustrated Herbiary: Guidance and Rituals from 36 Bewitching Botanicals

Happy Days: The Guided Path from Trauma to Profound Freedom and Inner Peace

Here & Hereafter: How Wisdom from the Departed Can Transform Your Life Now

The Altar Within: A Radical Devotional Guide to Liberate the Divine Self

Born Giving Birth to a New You

You Are the Placebo: Making Your Mind Matter

The Pocket Book of Stones: Who They Are and What They Teach

How to Be a Boss B*tch

The Book of Stones: Who They Are and What They Teach

Dungeons & Dragons: How to Be More D&d: Face Your Dragons, Be More Adventurous, and Live Your Best Geeky Life

Modern Tarot: Connecting with Your Higher Self Through the Wisdom of the Cards

Letting Go: The Pathway of Surrender

The Secret to Love, Health, and Money: A Masterclassvolume 5

Good Vibes, Good Life: How Self-Love Is the Key to Unlocking Your Greatness