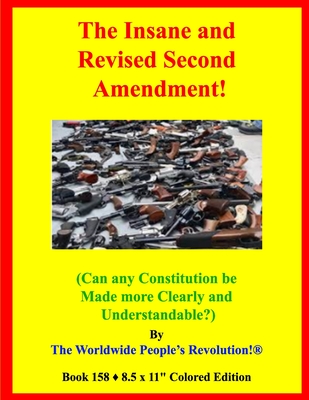 The Insane and Revised Second Amendment!: (Can any Constitution be Made more Clearly and Understandable?)

Most People will Admit that there are some People in this World of Woes, who Need to be KILLED; but, it is Normally those who do NOT Need to be Killed, who are the Victims of Crazy People --- such as the last Mass Murderer, who probably only Lacked a Good Whipping by his Father, when he was just a Boy, in Order to Teach to him some Respect for other People. Otherwise, he should have been Committed to a Swanky Fasting Sanitarium, whereby the Demon Spirits might Escape from his Head, or wherever they are Lodging. Only God would Know for Sure; but, whatever the Case, this Inspired Book Reveals what to Do about that Insane Second Amendment, which makes all such Murders Possible. Moreover, this Extremely Good Book also Addresses the Illegal Immigration Problem at the Southern Border of more Capitalist Insanity, and tells HOW to Fix it, without Offending anyone, including the Hard-nosed Republicans, some of whom have 2x4 Boards Stuck in their Tail Pipes, who Desperately Need HIGH Enemas with Gasoline, as Huck Finn might say to Nigger Jim, in the Adventures of Tom Sawyer with Mrs. Judge Thatcher, just to Clean them OUT! But, our Selected King has a much more Civilized Approach, which is Acceptable to everyone with a Sound Mind, including the Fake Trumpeter with Golf Balls Stuck in his own Eyeballs, who Naturally Refuses to even Look at it! But, do not allow it to Bother your own Conscience any: beCause it is his Personal Problem, which he will have to Deal with during God's Day of Judgment, when God Kindly Informs him that there is only ONE World, and NO Borders for the Winds nor Rains; and He OWNS IT! But, you are Welcome to Disagree with God, and take up your Best Argument in a Courtroom, if you can Find one in some Trash Dump. None of us at Amazon have any Arguments against our Selected King: beCause, he really does have the Best Solutions that we can Discover. And we have read a LOT of Books; but, few are as Good as this one! Just read the Outside Back Cover, if you Doubt it. Take a Good Look Inside.