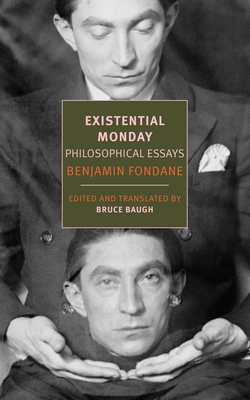 Benjamin Fondane--who was born and educated in Romania, moved as an adult to Paris, lived for a time in Buenos Aires, where he was close to Victoria Ocampo, Jorge Luis Borges's friend and publisher, and died in Auschwitz--was an artist and thinker who found in every limit, in every border, a torture and a spur. Poet, critic, man of the theater, movie director, Fondane was the most daring of the existentialists, a metaphysical anarchist, affirming individual against those great abstractions that limit human freedom--the State, History, the Law, the Idea.

Existential Monday, the first selection of his philosophical work to appear in English, includes four of Fondane's most thought-provoking and important texts, Existential Monday and the Sunday of History, Preface for the Present Moment, Man Before History (co-translated by Andrew Rubens), and Boredom. Here Fondane, until now little-known except to specialists, emerges as one of the enduring French philosophers of the twentieth century.

A Companion to Antonio Gramsci: Essays on History and Theories of History, Politics and Historiography

Symposium and the Death of Socrates

Science in the Soul: Selected Writings of a Passionate Rationalist

Theogenesis The Foundation Of Hermetic Philosophy