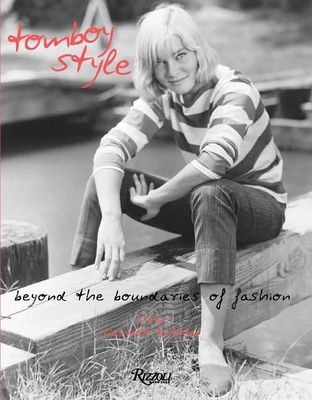 Tomboy Style: Beyond the Boundaries of Fashion

Tomboys are confident, rebellious, and adventurous. They are bold, brazen, fierce--and sexy. They aren't known for following rules, they are known for doing--and wearing--whatever they want. Tomboy captures the tomboy's style, her je ne sais quoi, her wardrobe, and most importantly, her spirit. Throughout the twentieth century, the mass marketing of gender stereotypes meant tomboys cropped up against the odds, trends, and ads. As menswear-inspired fashions for women have exploded into the mainstream under the helm of designers and stylists ranging from J.Crew to Rag & Bone to Boy by Band of Outsiders, acceptance of both the word tomboy and the women associated with its edge has been set into play. But a tomboy is not just about style--tomboys are measured in equal parts wardrobe and spirit. A visual history that chronicles the past eighty years of women who blur the line between masculinity and femininity, Tomboy explores the evolution of the style and its icons. Vivid commentary illuminates the tomboy's history and captures a diversity of women who are bound together by their inherent ability to seamlessly blend a rugged sensibility with classic, understated elegance.

Power of Style : The Women Who Defined the Art of Living Well

Target: 20 Years of Design for All: How Target Revolutionized Accessible Design

Little Book of Louis Vuitton: The Story of the Iconic Fashion House

Black Ivy: A Revolt in Style

Knitting the National Parks: 63 Easy-To-Follow Designs for Beautiful Beanies Inspired by the Us National Parks (Knitting Books and Patterns; Knitti

Little Book of Dior: The Story of the Iconic Fashion House

Harry Styles: And the Clothes He Wears

Sketch Your Style: A Guided Sketchbook for Drawing Your Dream Wardrobe

The Little Book of Hermès: The Story of the Iconic Fashion House

A Man & His Car: Iconic Cars and Stories from the Men Who Love Them

Little Book of Gucci: The Story of the Iconic Fashion House

A Man & His Watch: Iconic Watches and Stories from the Men Who Wore Them

The Little Guide to Coco Chanel: Style to Live by

The Art of Living with White: A Year of Inspiration

Masters of Make-Up Effects: A Century of Practical Magic

New York: Through a Fashion Eye

Sew It Yourself with DIY Daisy: 20 Pattern-Free Projects (and Infinite Variations) to Make Your Dream Wardrobe

Close Knit: 15 Patterns and 45 Techniques from Beginner to Advanced from Europe's Coolest Knitter

What Shall I Wear?: The What, Where, When, and How Much of Fashion, New Edition

The Lady Di Look Book: What Diana Was Trying to Tell Us Through Her Clothes

The Art of Disney Costuming: Heroes, Villains, and Spaces Between

Staff of the Walt Disney Archives

The Little Book of Valentino: The Story of the Iconic Fashion House

The Little Book of Balenciaga: The Story of the Iconic Fashion House

1000 Sneakers: A Guide to the World's Greatest Kicks, from Sport to Street

The Little Book of Chanel by Lagerfeld: The Story of the Iconic Fashion Designer

Horology: An Illustrated Primer on the History, Philosophy, and Science of Time, with an Overview of the Wristwatch and the Watc

Out of the Box: The Rise of Sneaker Culture

Coco Chanel: The Illustrated World of a Fashion Icon

Complex Presents: Sneaker of the Year: The Best Since '85

The Step-By-Step Guide to 200 Crochet Stitches

Little Book of Yves Saint Laurent: The Story of the Iconic Fashion House

Paris: Through a Fashion Eye

Cosplay for You: Personalized Design in Crafting Costumes; From Concept to Creation

Chanel No. 5: Story of a Perfume

Soled Out: The Golden Age of Sneaker Advertising (a Sneaker Freaker Book)

The Book of Rolex

The Cosplay Book of Ballgowns: Create the Masterpiece of Your Dreams!

The Power of Plus: Inside Fashion's Size-Inclusivity Revolution

Ralph Lauren: In His Own Fashion

Salad for President: A Cookbook Inspired by Artists

Sundressed: Natural Fabrics and the Future of Clothing

HRH: So Many Thoughts on Royal Style

The Chiffon Trenches: A Memoir

200 Women: Who Will Change the Way You See the World

Little Book of Schiaparelli: The Story of the Iconic Fashion House

Pat in the City: My Life of Fashion, Style, and Breaking All the Rules

Audrey Hepburn: The Illustrated World of a Fashion Icon

Chanel Paperscapes: The Book That Transforms Into a Work of Art

The World According to Coco: The Wit and Wisdom of Coco Chanel

Patterns of India: A Journey Through Colors, Textiles, and the Vibrancy of Rajasthan

How to Read a Dress: A Guide to Changing Fashion from the 16th to the 21st Century

The World According to Christian Dior

Furoshiki: The Japanese Art of Wrapping with Fabric

Modern Mending: How to Minimize Waste and Maximize Style

The Costume Making Guide: Creating Armor and Props for Cosplay

Drag Match: Pair Up the Before and After Looks

Christian Dior: The Illustrated World of a Fashion Master

The Monocle Guide to Better Living

Fashion Drawing: Inspirational Step-By-Step Illustrations Show You How to Draw Like a Fashion Illustrator

This Is Not Fashion: Streetwear Past, Present and Future

The Art of Bob MacKie

The V&a Sourcebook of Pattern and Ornament

Hermès: Straight from the Horse's Mouth

Anna Spiro: A Life in Pattern

The Ghost Perfumer: Creed, Lies, & the Scent of the Century