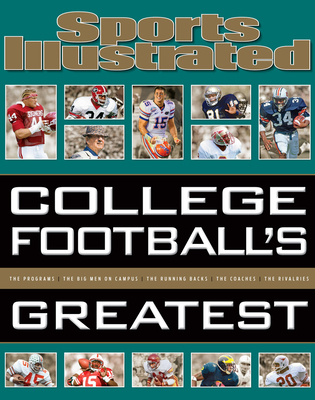 This book will end many arguments-- and start some new ones. Any college football fan, no matter where they live now or where their college loyalty lies has opinions about the game. Now, SI's team of experts once and for all settles the questions college football fans have debated since the first kickoff in College Football's Greatest. For instance, which is the greatest program of all time, Alabama or Notre Dame? What about Ohio State? Where do Tim Tebow and Peyton Manning rank among the best college quarterbacks? Which was the better team, the 1995 Cornhuskers or the 2001 Hurricanes? Where would you find the better game-day experience -- in Ann Arbor or Baton Rouge? Every facet of the game is debated and evaluated, from running back to coach and everything in between. Throughout this deluxe edition, essays and articles from the Sports Illustrated Archives are paired with the iconic photography that SI is known for and the talented team of editors and writers weigh in with their expert opinions as well as some of their personal favorites. College Football's Greatest is the book that no football fan can be without.

Year of the Rocket: John Candy, Wayne Gretzky, a Crooked Tycoon, and the Craziest Season in Football History

Be a Pro: Your Blueprint to Professional Level Achievement

Who Says I Can't: The Astonishing Story of a Fearless Life

History Through the Headsets: Inside Notre Dame's Playoff Run During the Craziest Season in College Football History

Create and Make My Own Football Plays: My (top secret) Playbook for kids. Perfect for recess and backyard football games and for kids that love to mak

The Pettis Norman Story: A Journey Through the Cotton Fields, to the Super Bowl, and into Servant Leadership

The Art Of Kicking

Tom Brady: An inspiring biography of one of football's greatest players!

Kings of the North: Photographs and History of the Minnesota Vikings

Above the Line: Lessons in Leadership and Life from a Championship Program

Son of Bum: Lessons My Dad Taught Me about Football and Life

If These Walls Could Talk: Raiders: Stories from the Raiders Sideline, Locker Room, and Press Box

When The Lights Go Out

No Excuses: The Making of a Head Coach

Bud Wilkinson and the Rise of Oklahoma Football

The Education of a Coach

Win Forever: Live, Work, and Play Like a Champion

The Turnpike Rivalry: The Pittsburgh Steelers and the Cleveland Browns

The Physics of Football: Discover the Science of Bone-Crunching Hits, Soaring Field Goals, and Awe-Inspiring Passes

The 100-Yard War: Inside the 100-Year-Old Michigan-Ohio State Football Rivalry

Buckeye Memories: From the Couch, the Stands, and the Press Box... and a Few Fun Facts

When the Cheering Stops: Life after the NFL

The Soul of a Team: A Modern-Day Fable for Winning Teamwork

Mind and Matter: A Life in Math and Football

One Team, One Heartbeat: Lsu's Remarkable Road to the National Championship

100 Things Michigan Fans Should Know & Do Before They Die

High-Impact Life: A Sports Agent's Secrets to Finding and Fulfilling a Purpose You Can't Lose

The Home Team: My Bromance with off Brand Football

12: Tom Brady and His Battle for Redemption

Hell with the Lid Off: Inside the Fierce Rivalry Between the 1970s Oakland Raiders and Pittsburgh Steelers