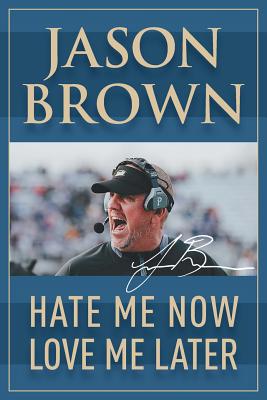 Former NFL player Jason Brown is a recruiter and college football coach. Coach Brown became widely known as the no-nonsense coach on Seasons 3 and 4 of Netflix's smash hit Last Chance U. He currently resides in San Diego, CA with his best friend, Stogie.

Coach Brown is 1 of 1. A total original. Watching him on Last Chance U was the most interesting thing on TV since The Sopranos. He's the Tony Soprano of football. -- Michael Rapaport, Actor/Comedian

JB was the first QB I coached at Compton College. Jason's father came to me to make sure I would look after him and I took that task on head first and with honor. Jason not only became my first All-American QB, he went on and did everything he said he would. This book epitomizes who he is: straightforward, driven, emotional, and 100% invested in the WIN. -- Coach Cornell Ward, Former Head Coach, Compton Community College

I did not have a single college scholarship offer coming out of high school. Jason Brown saw potential in me when no one else did. He helped teach and mold me into a future NFL QB. -- Brad Sorensen, Quarterback, San Diego Chargers, Tennessee Titans, Minnesota Vikings

Jason and I have known each other for twenty years. I coached against Jason while he was a player and together on the same staff. The general public does not know how caring and committed he is to the well-being of his players. Many outside of his circle fail to ascertain this quality in him but once you get to know JB, you will appreciate Jason Brown. -- Marguet Miller, Head Football Coach, West Los Angeles College

BUD : THE OTHER SIDE OF THE GLACIER

The Last Folk Hero: The Life and Myth of Bo Jackson

Figure It Out: My Thirty-Two-Year Journey While Revolutionizing Pro Football's Special Teams

Tim Grunhard: View from the Center: My Football Life and the Rebirth of Chiefs Kingdom

NFL 100: The Greatest Moments of the Nfl's Century

The Hot Seat: A Year of Outrage, Pride, and Occasional Games of College Football

Rudy Ruettiger: The Walk on

Draw the Line: Jeff Traylor, the Gilmer Buckeyes, and a Season Deep in the Heart of East Texas

Take Your Eye Off the Ball 2.0: How to Watch Football by Knowing Where to Look

Purple Heroes: Football Stories from the Gridiron to the Cross

Return to Glory: A History of the Georgia Bulldogs

Saint Woody: The History and Fanaticism of Ohio State Football

The Transition Mindset: How Retiring from the NFL at the Peak of My Career Changed My Life

Alabama Adult Coloring Book: A Colorful Way to Cheer on Your Team!

Perfection: The Inside Story of the 1972 Miami Dolphins' Perfect Season

The Idealist: Jack Trice and the Battle for a Forgotten Football Legacy

Buck Shaw: The Life and Sportsmanship of the Legendary Football Coach

Nca&t vs. Nccu: More Than Just a Game

The Blood and Guts: How Tight Ends Save Football

The Program: Alabama: A Curated History of the Crimson Tide

A Giant Win: Inside the New York Giants' Historic Upset Over the New England Patriots in Super Bowl XLII

Spies on the Sidelines: The High-Stakes World of NFL Espionage

What Set Me Free (the Story That Inspired the Major Motion Picture Brian Banks): A True Story of Wrongful Conviction, a Dream Deferred, and a Man Rede

SOL Still Our Lions: A Fan's History of the Detroit Lions and the City They Represent

Head on: A Memoir

Go Bills!: Photographs and History of the Buffalo Bills

Notre Dame Game Day: Getting There, Getting In, and Getting in the Spirit