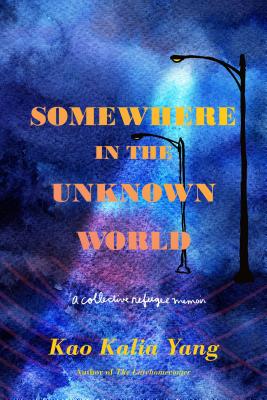 From an exceptional storyteller, Somewhere in the Unknown World is a collection of powerful stories of refugees who have found new lives in Minnesota's Twin Cities, told by the award-winning author of The Latehomecomer and The Song Poet.

All over this country, there are refugees. But beyond the headlines, few know who they are, how they live, or what they have lost. Although Minnesota is not known for its diversity, the state has welcomed more refugees per capita than any other, from Syria to Bosnia, Thailand to Liberia. Now, with nativism on the rise, Kao Kalia Yang--herself a Hmong refugee--has gathered stories of the stateless who today call the Twin Cities home. Here are people who found the strength and courage to rebuild after leaving all they hold dear. Awo and her mother, who escaped from Somalia, reunite with her father on the phone every Saturday, across the span of continents and decades. Tommy, born in Minneapolis to refugees from Cambodia, cannot escape the war that his parents carry inside. As Afghani flees the reach of the Taliban, he seeks at every stop what he calls a certificate of his humanity. Mr. Truong brings pho from Vietnam to Frogtown in St. Paul, reviving a crumbling block as well as his own family. In Yang's exquisite, necessary telling, these fourteen stories for refugee journeys restore history and humanity to America's strangers and redeem its long tradition of welcome.

You Sound Like a White Girl: The Case for Rejecting Assimilation

Welcome Home: A Guide to Building a Home for Your Soul

The Devil's Highway: A True Story

Sigh, Gone: A Misfit's Memoir of Great Books, Punk Rock, and the Fight to Fit in

Harvest of Empire: A History of Latinos in America: Second Revised and Updated Edition

My Boy Will Die of Sorrow: A Memoir of Immigration from the Front Lines

I Was Their American Dream: A Graphic Memoir

Nomads: The Wanderers Who Shaped Our World

Enrique's Journey: The Story of a Boy's Dangerous Odyssey to Reunite with His Mother

City of Refugees: The Story of Three Newcomers Who Breathed Life Into a Dying American Town

Border and Rule: Global Migration, Capitalism, and the Rise of Racist Nationalism

Migrations: A History of Where We All Came from

Once I Was You: A Memoir

Salted Plums: A Memoir of Culture and Identity

The Land of Open Graves: Living and Dying on the Migrant Trail Volume 36

8 Billion and Counting: How Sex, Death, and Migration Shape Our World

Home/Land: A Memoir of Departure and Return

Milked: How an American Crisis Brought Together Midwestern Dairy Farmers and Mexican Workers

Welcome to the New World

A Cup of Water Under My Bed: A Memoir

My Fourth Time, We Drowned: Seeking Refuge on the World's Deadliest Migration Route

Border Hacker: A Tale of Treachery, Trafficking, and Two Friends on the Run

In the Country We Love: My Family Divided (Updated with New Material)

San Francisco Pilgrimage: Memoir of a Lifelong Love Affair with My City: My

Conquests and Cultures: An International History

Antonio, We Know You

America for Americans: A History of Xenophobia in the United States

Mothercoin: The Stories of Immigrant Nannies

The Latinos of Asia: How Filipino Americans Break the Rules of Race

Parenting with an Accent: How Immigrants Honor Their Heritage, Navigate Setbacks, and Chart New Paths for Their Children

6,000 Miles to Freedom: Two Boys and Their Flight from the Taliban

Move: The Forces Uprooting Us

Nine Quarters of Jerusalem: A New Biography of the Old City

Tears of My Mother: The Legacy of My Nigerian Upbringing

From Threatening Guerrillas to Forever Illegals: US Central Americans and the Cultural Politics of Non-Belonging

Funny in Farsi: A Memoir of Growing Up Iranian in America

Settlers: The Mythology of the White Proletariat from Mayflower to Modern

Mexifornia: A State of Becoming

Immigration Matters: Movements, Visions, and Strategies for a Progressive Future

A Map Is Only One Story: Twenty Writers on Immigration, Family, and the Meaning of Home

Made in China: A Memoir of Love and Labor

The Kitchen Without Borders: Recipes and Stories from Refugee and Immigrant Chefs

Those We Throw Away Are Diamonds: A Refugee's Search for Home

Last Boat Out of Shanghai: The Epic Story of the Chinese Who Fled Mao's Revolution

The Next Great Migration: The Beauty and Terror of Life on the Move

Journeys from There to Here: Stories of Immigrant Trials, Triumphs, and Contributions

Sigh, Gone: A Misfit's Memoir of Great Books, Punk Rock, and the Fight to Fit in

Crossing Borders: The Reconciliation of a Nation of Immigrants

Unforgetting: A Memoir of Family, Migration, Gangs, and Revolution in the Americas

The Newcomers: Finding Refuge, Friendship, and Hope in America

App Kid: How a Child of Immigrants Grabbed a Piece of the American Dream

Made in China: A Memoir of Love and Labor

Migrations and Cultures: A World View

Justice for All: ...a compelling immigrant saga

The Truth in Our Stories: Immigrant Voices in Radical Times

First, They Erased Our Name: A Rohingya Speaks

The God Who Sees: Immigrants, the Bible, and the Journey to Belong

Call Me American: A Memoir

White Borders: The History of Race and Immigration in the United States from Chinese Exclusion to the Border Wall

On the Plain of Snakes: A Mexican Journey

The School I Deserve: Six Young Refugees and Their Fight for Equality in America

Dreams for Our Children: Immigrant Letters to the Future

One Quarter of the Nation: Immigration and the Transformation of America

The Border Within: The Economics of Immigration in an Age of Fear

Strangers from a Different Shore: A History of Asian Americans Au Of...

The Age of Migration: International Population Movements in the Modern World

Being a Distance Son or Daughter: A Book for ALL Generations

The Ungrateful Refugee: What Immigrants Never Tell You

Why the Germans Do It Better: Notes from a Grown-Up Country

Undocumented: Stories of Indian Migrants in the Arab Gulf

Outsider Agent: The Extraordinary Adventures of an Immigrant and Mystic in the FBI

Ninety Miles and a Lifetime Away: Memories of Early Cuban Exiles

Forced Out and Fenced in: Immigration Tales from the Field

The Border Crossed Us: The Case for Opening the Us-Mexico Border

The Return of Geopolitics: A Global Quest for the Right Side of History

Una Vez Fui Tú (Once I Was You Spanish Edition): Memorias

The Golden Land: The Story of a Jewish Family's Journey from Ukraine to America in the Early 1900's

Dance or Die: From Stateless Refugee to International Ballet Star a Memoir

A Hope More Powerful Than the Sea: One Refugee's Incredible Story of Love, Loss, and Survival

Finding Manana: A Memoir of a Cuban Exodus

How Race Is Made in America: Immigration, Citizenship, and the Historical Power of Racial Scripts Volume 38

Irish Immigrants in Michigan: A History in Stories

Design to Live: Everyday Inventions from a Refugee Camp

Prey: Immigration, Islam, and the Erosion of Women's Rights

You and I Eat the Same: On the Countless Ways Food and Cooking Connect Us to One Another (Mad Dispatches, Volume 1)

On a Wisconsin Family Farm: Historic Tales of Character, Community and Culture

Old Woman with Berries in Her Lap

In Pursuit of Their Dreams: A History of Azorean Immigration to the United Statesvolume 3

Unforgetting: A Memoir of Family, Migration, Gangs, and Revolution in the Americas

Nature Knows No Color-Line: Research into the Negro Ancestry in the White Race

The Ungrateful Refugee: What Immigrants Never Tell You

The Far Away Brothers: Two Young Migrants and the Making of an American Life

The Coffin Ship: Life and Death at Sea During the Great Irish Famine

From Somalia to Snow: How Central Minnesota Became Home to Somalis

A Beginner's Guide to America: For the Immigrant and the Curious

The Beast: Riding the Rails and Dodging Narcos on the Migrant Trail

You Are Not American: Citizenship Stripping from Dred Scott to the Dreamers

The Heart of the Heartland: Norwegian American Community in the Twin Cities

Scottish Genealogy: The Basics and Beyond

The $16 Taco: Contested Geographies of Food, Ethnicity, and Gentrification

Parenting with an Accent: How Immigrants Honor Their Heritage, Navigate Setbacks, and Chart New Paths for Their Children

App Kid: How a Child of Immigrants Grabbed a Piece of the American Dream

The Book of Rosy: A Mother's Story of Separation at the Border

Consuming Ocean Island: Stories of People and Phosphate from Banaba

By The Bridge Or By The River?

Let's Talk about Your Wall: Mexican Writers Respond to the Immigration Crisis

Separated: Inside an American Tragedy

Antonio, We Know You

Build Bridges, Not Walls: A Journey to a World Without Borders

Haven: The Dramatic Story of 1,000 World War II Refugees and How They Came to America

The Succeeders: How Immigrant Youth Are Transforming What It Means to Belong in America Volume 53

Immigration, Refugees, and the Fight for a Better Life

Making Mexican Chicago: From Postwar Settlement to the Age of Gentrification

Meatpacking America: How Migration, Work, and Faith Unite and Divide the Heartland

La Gente: Struggles for Empowerment and Community Self-Determination in Sacramento

Home/Land: A Memoir of Departure and Return (Large Print Edition)

Toward Xenopolis: Visions from the Borderland

Coming to America: Stories of the immigrants who make America You Don't Know What You've Got 'Till it's Gone