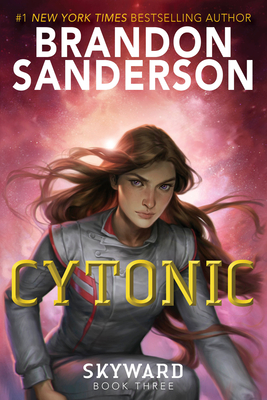 From the #1 New York Times bestselling author of the Reckoners series, the Mistborn trilogy, and the Stormlight Archive comes the third book in an epic series about a girl who will travel beyond the stars to save the world she loves from destruction. Spensa's life as a Defiant Defense Force pilot has been far from ordinary. She proved herself one of the best starfighters in the human enclave of Detritus and she saved her people from extermination at the hands of the Krell--the enigmatic alien species that has been holding them captive for decades. What's more, she traveled light-years from home as an undercover spy to infiltrate the Superiority, where she learned of the galaxy beyond her small, desolate planet home. Now, the Superiority--the governing galactic alliance bent on dominating all human life--has started a galaxy-wide war. And Spensa's seen the weapons they plan to use to end it: the Delvers. Ancient, mysterious alien forces that can wipe out entire planetary systems in an instant. Spensa knows that no matter how many pilots the DDF has, there is no defeating this predator. Except that Spensa is Cytonic. She faced down a Delver and saw something eerily familiar about it. And maybe, if she's able to figure out what she is, she could be more than just another pilot in this unfolding war. She could save the galaxy. The only way she can discover what she really is, though, is to leave behind all she knows and enter the Nowhere. A place from which few ever return. To have courage means facing fear. And this mission is terrifying. Praise for Skyward
An Instant New York Times Bestseller
A Kirkus Reviews Best Book of the Year Startling revelations and stakes-raising implications . . . Sanderson plainly had a ball with this nonstop, highflying opener, and readers will too. --Kirkus Reviews, starred review With this action-packed trilogy opener, Sanderson offers up a resourceful, fearless heroine and a memorable cast . . . [and] as the pulse-pounding story intensifies and reveals its secrets, a cliffhanger ending sets things up for the next installment. --Publishers Weekly, starred review It is impossible to turn the pages fast enough. --Booklist Sanderson delivers a cinematic adventure that explores the defining aspects of the individual versus the society . . . [and] fans of [his] will not be disappointed. --SLJ
Praise for Starsight, the sequel to Skyward
An Instant New York Times Bestseller No one has more fun writing or is better at describing galactic dogfights. . . . Read the first one for fun or enjoy the second on its own. --Booklist

The Twisted Ones: An Afk Book (Five Nights at Freddy's Graphic Novel #2), 2

Avatar, the Last Airbender: The Rise of Kyoshi

I'm in Love with the Villainess (Light Novel) Vol. 3

Avatar, the Last Airbender: The Shadow of Kyoshi

What Once Was Mine: A Twisted Tale

To Kill a Kingdom

The Storm of Echoes: Book Four of the Mirror Visitor Quartet

The Nature of Witches

Descendants of the First

The Girl from the Other Side: Siúil, a Rún Vol. 1

A Court of Thorns and Roses Collector's Edition

We Free the Stars

A Lesson in Vengeance

We Are Not Free

Within These Wicked Walls

Into the Pit (Five Nights at Freddy's: Fazbear Frights #1), 1

The Desolations of Devil's Acre

A Curse So Dark and Lonely

With the Fire on High

Lost in the Never Woods