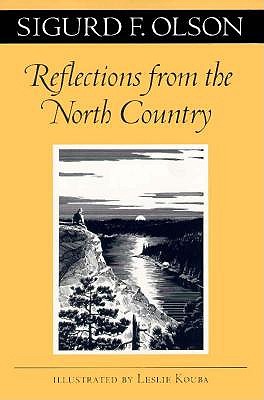 Reflections from the North Country

Written in the last years of his life, Reflections from the North Country is often considered Sigurd Olson's most intellectually significant work. In an account alive with anecdote and insight, Olson outlines the wilderness philosophy he developed while working as an outspoken advocate for the conservation of America's natural heritage.

Based on speeches delivered at town meetings and government hearings, this book joins The Singing Wilderness and Listening Point as the core of Olson's work. Upon its initial publication in 1976, Reflections from the North Country, with Olson's unique combination of lyrical nature writing and activism, became an inspiration to the burgeoning environmental movement, selling over 46,000 copies in hardcover.

In this wide-ranging work, Olson evokes the soaring grace of raven, osprey, and eagle, the call of the loon, and the song of the hermit thrush. He challenges the reader to loosen the grasp of technology and the rush of contemporary life and make room for a sense of wonder heightened by being in nature. From evolution to the meaning and power of solitude, Olson meditates on the human condition, offering eloquent testimony to the joys and truths he discovered in his beloved north-country wilderness.

Sand County Almanac: And Sketches Here and There

A Walk in the Woods

The Woodlands of Ivor: Essays of Intimacy and relationship in the natural world

Wild Like Flowers: The Restoration of Relationship Through Regeneration

Unsolaced: Along the Way to All That Is

Miracle Country: A Memoir of a Family and a Landscape

Gods, Wasps and Stranglers: The Secret History and Redemptive Future of Fig Trees

Stronghold: One Man's Quest to Save the World's Wild Salmon

Indian Creek Chronicles: A Winter Alone in the Wilderness

Ms. Adventure: My Wild Explorations in Science, Lava, and Life

Tahoma and Its People: A Natural History of Mount Rainier National Park

The Radiant Lives of Animals

Fossils Inside Out: A Global Fusion of Science, Art and Culture

The Colors of Nature: Culture, Identity, and the Natural World

Jungle: How Tropical Forests Shaped the World--And Us

Seeking Truth in a Country of Lies: Critical & Lyrical Essays

Wayfinding: The Science and Mystery of How Humans Navigate the World

Things That Are: Essays

The World Before Us: The New Science Behind Our Human Origins

A Wild Love for the World: Joanna Macy and the Work of Our Time

A Fly Rod of Your Own

The 6th Extinction: An Unnatural History

A Salad Only the Devil Would Eat: The Joys of Ugly Nature

The Earth Has a Soul: C.G. Jung on Nature, Technology and Modern Life

Walden: With an Introduction and Annotations by Bill McKibben

Canoeing in the Wilderness

Moral Ground: Ethical Action for a Planet in Peril

A Country Year: Living the Questions

Wild Mind: A Field Guide to the Human Psyche

The Way Home: Tales from a Life Without Technology

Taming Fruit: How Orchards Have Transformed the Land, Offered Sanctuary, and Inspired Creativity

Red: Passion and Patience in the Desert

The Star in the Sycamore: Discovering Nature's Hidden Virtues in the Wild Nearby

The Cold Vanish: Seeking the Missing in North America's Wildlands

Something of His Art: Walking to Lübeck with J. S. Bach

Anywhere That Is Wild: John Muir's First Walk to Yosemite

Teaching a Stone to Talk: Expeditions and Encounters