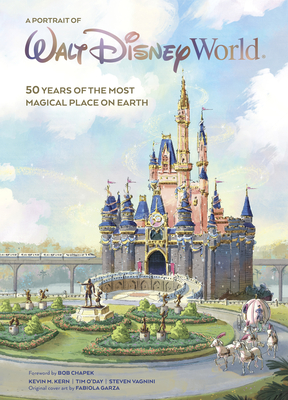 Walt Disney World honors its fiftieth anniversary with The World's Most Magical Celebration, an incredible 18-month event that begins October 1, 2021. As part of the festivities, this must-have coffee table book paints a robust portrait of the Florida resort, through vibrant voices and rare Disney theme park concept art, photographs, and ephemera. Walt Disney's vision for the Florida Project begins with Disneyland and the 1964-1965 New York World's Fair. After an imaginative and expansive design, a unique land acquisition process, and an innovative construction period, Walt Disney World celebrated its opening in 1971. It featured a theme park dubbed the Magic Kingdom and three exquisitely themed resorts: Disney's Contemporary Resort, Disney's Polynesian Village, and Disney's Fort Wilderness Resort & Campground. As Walt Disney World consistently grew and evolved through the five decades that have followed, certain themes keep reverberating: there's an appreciation for nostalgia, a joy in fantasy, a hunger for discovery, and an unending hope for a better tomorrow. Inspirational and memorable theme parks, water parks, sports arenas, recreational water sports options, world-class golf courses, vast shopping villages, and a transportation network unlike any other in the world resulted in fun and familiar characters, traditions, spectacles, merchandise, and so much more. The resort has come to represent the pulse of American leisure and has served as a backdrop for life's milestones both big and small, public and private. A Portrait of Walt Disney World: 50 Years of The Most Magical Place on Earth serves as a treasure trove for pop culture enthusiasts, students of hospitality, artists, art collectors, and Disney fans.
Searching for ways to celebrate the Walt Disney World Resort? Explore more books from Disney Editions:

Guided by Food: Coffee, Breakfast, Lunch, Dinner and Everything in Between Around the World

The Nutmeg Trail: Recipes and Stories Along the Ancient Spice Routes

Cycling Atlas North America: The 350 Most Beautiful Cycling Trips in the Us, Canada, and Mexico

Secret Twin Cities: A Guide to the Weird, Wonderful, and Obscure

New York Precincts: A Curated Guide to the City's Best Shops, Eateries, Bars and Other Hangouts

Moon Northern California Road Trips: Drives Along the Coast, Redwoods, and Mountains with the Best Stops Along the Way

60 Hikes Within 60 Miles: Minneapolis and St. Paul: Including Hikes in and Around the Twin Cities

Epic Hikes of the World 1 1

Moon Best of Yellowstone & Grand Teton: Make the Most of One to Three Days in the Parks

Moon Best of Glacier, Banff & Jasper: Make the Most of One to Three Days in the Parks

Getting Out: Your Guide to Leaving America

National Geographic Guide to National Parks of the United States

The Third Pole: Mystery, Obsession, and Death on Mount Everest

The Traditional Shops and Restaurants of London: A Guide to Century-Old Establishments and New Classics

Moon Best of Zion & Bryce: Make the Most of One to Three Days in the Parks

Fodor's the Complete Guide to the National Parks of the West: With the Best Scenic Road Trips

Atlas Obscura: An Explorer's Guide to the World's Hidden Wonders

The Lost City of Z: A Tale of Deadly Obsession in the Amazon

Epic Runs of the World 1

Writers' London: A Guide to Literary People and Places

Wish I Was Here: The World's Most Extraordinary Places on and Beyond the Seashore

Lonely Planet Europe on a Shoestring 10

The National Register of Historic Places in Minnesota: A Guide

Fodor's Essential Greece: With the Best of the Islands

Exploring the Boundary Waters: A Trip Planner and Guide to the Bwcaw

Don't Be a Tourist in New York: The Messy Nessy Chic Guide

Pilgrimage: The Great Pilgrim Routes of Britain and Europe

The Holy Trail: 12 Legendary Trails You Should Run

The Poetics of Distortion: Panoramic Photographs of the San Francisco Bay Area

Minnesota Must-See for Families: An A to Z List

Take More Vacations: How to Search Better, Book Cheaper, and Travel the World

The London Book: Highlights of a Fascinating City

The Wind at My Back: A Cycling Life

Best Tent Camping: Minnesota: Your Car-Camping Guide to Scenic Beauty, the Sounds of Nature, and an Escape from Civilization

National Geographic Drives of a Lifetime: 500 of the World's Most Spectacular Trips

Paris: Made by Hand

Apostle: Travels Among the Tombs of the Twelve

A Sense of Place: Great Travel Writers Talk about Their Craft, Lives, and Inspiration

A Culinary Traveller in Tuscany: Exploring and Eating Off the Beaten Track

The Historic Restaurants of Paris: A Guide to Century-Old Cafes, Bistros and Gourmet Food Shops

Paint by Sticker: Travel: Re-Create 12 Vintage Posters One Sticker at a Time!

The Next Exit 2022: The Mostcomplete Interstate Highway Guide Ever Printed

The Skies Above: A Guide to UFO Sightings in the UK

Disney World at 50: The Stories of How Walt's Kingdom Became Magic in Orlando

100 Hikes of a Lifetime: The World's Ultimate Scenic Trails

1,000 Places to See in the United States and Canada Before You Die

Prepare for Departure: Notes on a single mother, a misfit son, inevitable mortality and the enduring allure of frequent flyer miles