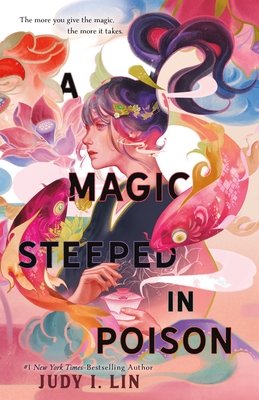 Judy I. Lin's sweeping debut A Magic Steeped in Poison, first in a duology, is sure to enchant fans of Adrienne Young and Leigh Bardugo. I used to look at my hands with pride. Now all I can think is, These are the hands that buried my mother. For Ning, the only thing worse than losing her mother is knowing that it's her own fault. She was the one who unknowingly brewed the poison tea that killed her--the poison tea that now threatens to also take her sister, Shu. When Ning hears of a competition to find the kingdom's greatest shennong-shi--masters of the ancient and magical art of tea-making--she travels to the imperial city to compete. The winner will receive a favor from the princess, which may be Ning's only chance to save her sister's life. But between the backstabbing competitors, bloody court politics, and a mysterious (and handsome) boy with a shocking secret, Ning might actually be the one in more danger. Praise for A Magic Steeped in Poison:
A USA Today Bestseller
A Publishers Weekly Bestseller
An ABA Indie Bestseller
An ABA Indies Introduce Selection
An ABA Indies Next Pick Beautifully written, from the setting to the magic system, A Magic Steeped in Poison is sure to enchant both fantasy lovers and cdrama aficionados. I'll be inhaling whatever Judy I. Lin brews up next. --Joan He, New York Times-bestselling author of The Ones We're Meant to Find Ning's unforgettable voice and the lush, atmospheric settings will enchant readers in this high-stakes story of deadly magic. ... Lin blends Chinese folklore with a thrilling mystery. It's the perfect recipe for a page-turner. --Booklist, starred review

It's Not Summer Without You (Reprint)

The Upside of Falling