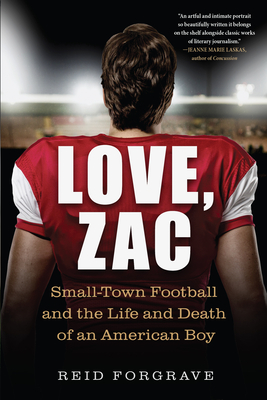 Love, Zac: Small-Town Football and the Life and Death of an American Boy

Love, Zac is not just a vital contribution to the national conversation about traumatic brain injury in athletes, it's so beautifully written it belongs on the shelf alongside classic works of literary journalism. --Jeanne Marie Laskas, New York Times bestselling author of Concussion

Zac Easter could be your neighbor, your classmate, your son. In December 2015, Zac Easter, a twenty-four-year-old from small-town Iowa, decided to take his own life rather than continue his losing battle against the traumatic brain injuries he had sustained as a no-holds-barred high school football player. For this deeply reported and powerfully moving true story, award-winning writer Reid Forgrave was given access to Zac's own diaries and was able to speak with Zac's family, friends, and coaches. He explores Zac's tight-knit, football-obsessed Midwestern community; he interviews leading brain scientists, psychologists, and sports historians; and he takes a deep dive into the triumphs and sins of the sports entertainment industry. Forgrave shows us how football mirrors America, from the fighting spirit the game has helped inscribe in our national character to the side effects of the traditional notions of manhood that it affirms. But above all, Love, Zac is a warning to parents and those entrusted with the care of our kids not to ignore concussions and warning signs of CTE (chronic traumatic encephalopathy). For parents struggling to decide whether to allow their kids to play football, this eye-opening, heart-wrenching, and ultimately inspiring story may be one of the most important books they will read.

Love, Zac: Small-Town Football and the Life and Death of an American Boy

Joe Kapp, the Toughest Chicano: A Life of Leadership

U.S. Bank Stadium: The New Home of the Minnesota Vikings

BUD : THE OTHER SIDE OF THE GLACIER

Figure It Out: My Thirty-Two-Year Journey While Revolutionizing Pro Football's Special Teams

NFL 100: The Greatest Moments of the Nfl's Century

Rudy Ruettiger: The Walk on

Son of Bum: Lessons My Dad Taught Me about Football and Life

Draw the Line: Jeff Traylor, the Gilmer Buckeyes, and a Season Deep in the Heart of East Texas

History Through the Headsets: Inside Notre Dame's Playoff Run During the Craziest Season in College Football History

Purple Heroes: Football Stories from the Gridiron to the Cross

Who Says I Can't: The Astonishing Story of a Fearless Life

Year of the Rocket: John Candy, Wayne Gretzky, a Crooked Tycoon, and the Craziest Season in Football History

The Transition Mindset: How Retiring from the NFL at the Peak of My Career Changed My Life

Buck Shaw: The Life and Sportsmanship of the Legendary Football Coach

The Hot Seat: A Year of Outrage, Pride, and Occasional Games of College Football

Create and Make My Own Football Plays: My (top secret) Playbook for kids. Perfect for recess and backyard football games and for kids that love to mak

Perfection: The Inside Story of the 1972 Miami Dolphins' Perfect Season

The Pettis Norman Story: A Journey Through the Cotton Fields, to the Super Bowl, and into Servant Leadership

Tom Brady: An inspiring biography of one of football's greatest players!

The Art Of Kicking

The Education of a Coach

Kings of the North: Photographs and History of the Minnesota Vikings

Nca&t vs. Nccu: More Than Just a Game

Notre Dame Game Day: Getting There, Getting In, and Getting in the Spirit

Return to Glory: A History of the Georgia Bulldogs

Win Forever: Live, Work, and Play Like a Champion

Alabama Adult Coloring Book: A Colorful Way to Cheer on Your Team!

If These Walls Could Talk: Raiders: Stories from the Raiders Sideline, Locker Room, and Press Box

Spies on the Sidelines: The High-Stakes World of NFL Espionage