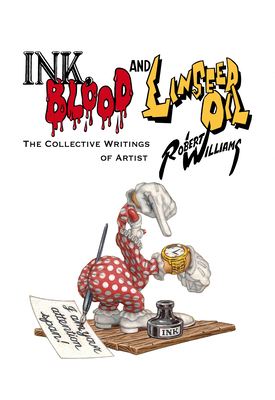 A collection of essays and observations about the art world by artist Robert Williams. With a masterful career spanning decades, Williams has been a part of one of the most influential art movements of the past 60 years.

This is a collection of Robert Williams' writings - 66 essays, a prologue, quantitative remarks, manifestos, an introduction by Juxtapoz publisher Gwynned Vitello and a postscript by Dr. Darius A. Spieth of Louisiana State University.

The writing in Ink, Blood, and Linseed Oil details and expounds Williams' observations of the art world, and its nuances and contradictions. He reflects on the nature of art and being an artist, and the politics, sociology and anthropology surrounding it all.

With each issue came an insightful editorial, penned by the godfather of lowbrow, Mr. Bitchin himself, Robert Williams. These essays, 22 years' worth and a few more, are collected in Ink, Blood, and Linseed Oil. They are presented for your enjoyment, bewilderment, and for furtherance of the discussion of the philosophy of art.

The Lowbrow Art of Robert Williams

My Jesus Loves Gays: Why Bible-Believing Christians Should Love and Accept LGBTQ People

Lexicon Cornu-Britannicum: A Dictionary of the Ancient Celtic Language of Cornwall, in Which the Words Are Elucidated by Copious Examples from th

Enwogion Cymru. A Biographical Dictionary Of Eminent Welshmen, From The Earliest Times To The Present, And Including Every Name Connected With The Anc

Eminent Welshmen: A Short Biographical Dictionary Of Welshmen Who Have Attained Distinction From The Earliest Times To The Present (Volu

Lexicon Cornu-Britannicum: A Dictionary of the Ancient Celtic Language of Cornwall, in Which the Words Are Elucidated by Copious Examples From th

Lexicon Cornu-britannicum: A Dictionary Of The Ancient Celtic Language Of Cornwall, In Which The Words Are Elucidated By Copious Examples From Th

Woodworking Plans: Advanced Guide to Special and Beautiful Crafting Techniques (How to Use Must Have Woodworking Tools for Beginners)

Ex-Gay Christian: Souls at the Crossroads

New Trading Dimensions: How to Profit from Chaos in Stocks, Bonds, and Commodities

Walking It Out: A Valiant Journey

Hesitant to Start: And Other Poems

Swing Trading: Start Creating Passive Income with this Quick & Easy Guide for Beginners. Learn how to Become a Profitable and Success

Options Trading: The Most Complete Quick Start Beginners Guide with the Best Trading Secret Strategies and Tactics to Build a Remarkabl

Day Trading: A Practical Guide with Best Beginners Strategies, Methods, Tools and Tactics to Make a Living and Create a Passive Inc

A Clarion Call for Corporate Prayer

The Capacity to Disappear: Hope for a Better and Present Relationship with Your Child

The Capacity to Disappear: Staying Present in Your Child's Life

Shades of Red: Confessions of a Wanna Be Church Girl

The Stuff of Our Lives: How to Value, Organize, and Preserve

The Soul of a Poet: He'll Blow Your Mind with His Poetry Lines

The Halo of Christ: Reflections on His Moral Character

The Descendants of Veach Williams

The Descendants of Veach Williams

Enwogion Cymru: A Biographical Dictionary of Eminent Welshmen, From the Earliest Times to the Present, and Including Every Name Connec

Enwogion Cymru: A Biographical Dictionary of Eminent Welshmen, From the Earliest Times to the Present, and Including Every Name Connec

Lexicon Cornu-Britannicum: A dictionary of the ancient Celtic language of Cornwall

Ranger on: From 58 Days to a Lifetime of Perspective

How To Handle Kids With ADHD: A Practical Guide On Parenting And Dealing With ADHD Kids

The Complete Work of Raphael

Vermeer and Painting in Delft

Degas and America : The Early Collectors

Jojo 6251: The World of Hirohiko Araki

Things to Look Forward to: 52 Large and Small Joys for Today and Every Day

Art Page-A-Day Gallery Calendar 2023: The Next Best Thing to Exploring Your Favorite Museum

The Tarot of Leonora Carrington

The Red Book: A Reader's Edition

Get Your Sh*t Together

Out of the Forests: The Art of Paul Bonner

Home Is in the Kitchen 2023 Deluxe Wall Calendar

Fresh Naked Girls - English Edition: In and Out of Lingerie

If These Apples Should Fall: Cézanne and the Present

A History of the World (in Dingbats): Drawings & Words

The Art of Posuka Demizu

The World of Frida Kahlo 1000 Piece Puzzle: A Jigsaw Puzzle

The Art of Adam Young

Houseplants and Hot Sauce: A Seek-And-Find Book for Grown-Ups (Seek and Find Books for Adults, Seek and Find Adult Games)

The Beginning Is Now: A Magnetic Monthly Calendar 2023: Perfect for a Fridge, Wall, or Desk

Louise Bourgeois X Jenny Holzer: The Violence of Handwriting Across a Page

How to Draw Inky Wonderlands: Create and Color Your Own Magical Adventure