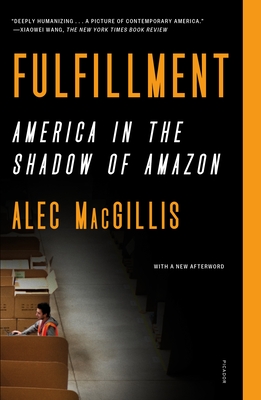 Fulfillment: America in the Shadow of Amazon

A grounded and expansive examination of the American economic divide . . . It takes a skillful journalist to weave data and anecdotes together so effectively. --Carolyn Kellogg, Los Angeles Times

An award-winning journalist investigates Amazon's impact on the wealth and poverty of towns and cities across the United States.

In 1937, the famed writer and activist Upton Sinclair published a novel bearing the subtitle A Story of Ford-America. He blasted the callousness of a company worth a billion dollars that underpaid its workers while forcing them to engage in repetitive and sometimes dangerous assembly-line labor. Eight decades later, the market capitalization of Amazon.com has exceeded $1.5 trillion, while the value of the Ford Motor Company hovers around $30 billion. We have entered the age of one-click America--and as the coronavirus makes Americans more dependent on online shopping, Amazon's sway will only intensify. Alec MacGillis's Fulfillment is not another exposé of our most conspicuously dominant company. Rather, it is a literary investigation of the America that falls within that company's growing shadow. As MacGillis shows, Amazon's sprawling network of delivery hubs, data centers, and corporate campuses epitomizes a land where winner and loser cities and regions are drifting steadily apart, the civic fabric is unraveling, and work has become increasingly rudimentary and isolated. In Seattle, high-paid workers in new office towers displace a historic Black neighborhood. In Ohio, cardboard makers supplant auto manufacturers, and in suburban Virginia, homeowners try to protect their town from the environmental impact of a new data center. When a warehouse replaces a fabled steel plant on the outskirts of Baltimore, a new model of work becomes visible. Fulfillment also shows how Amazon has become a force in Washington, D.C., ushering readers through a revolving door for lobbyists and government contractors and into CEO Jeff Bezos's Kalorama mansion. With empathy and breadth, MacGillis demonstrates the hidden human costs of the other inequality--not the growing gap between rich and poor, but the gap between the country's winning and losing regions. The result is an intimate account of contemporary capitalism: its drive to innovate, its dark, pitiless magic, its remaking of America with every click.

The Ascent of Money: A Financial History of the World: 10th Anniversary Edition

The End of Poverty: Economic Possibilities for Our Time

Of Blood and Sweat: Black Lives and the Making of White Power and Wealth

The Power of Regret: How Looking Backward Moves Us Forward

Capital in the Twenty-First Century

Lying for Money: How Legendary Frauds Reveal the Workings of the World

The Price of Time: The Real Story of Interest

The Future of Money

From Here to Equality: Reparations for Black Americans in the Twenty-First Century

Predictably Irrational, Revised and Expanded Edition: The Hidden Forces That Shape Our Decisions

The Wealth of Nations

The Death of Money: The Coming Collapse of the International Monetary System

Prisoners of the American Dream: Politics and Economy in the History of the Us Working Class

The Big Short: Inside the Doomsday Machine

Globalization and Its Discontents

Griftopia: A Story of Bankers, Politicians, and the Most Audacious Power Grab in American History

What Then Must We Do?: Straight Talk about the Next American Revolution

The Great Divide: Unequal Societies and What We Can Do about Them

Principles for Dealing with the Changing World Order: Why Nations Succeed and Fail

Baby Steps Millionaires: How Ordinary People Built Extraordinary Wealth--And How You Can Too

Slouching Towards Utopia: An Economic History of the Twentieth Century

The Lords of Easy Money: How the Federal Reserve Broke the American Economy

The Richest Man in Babylon

Open Veins of Latin America: Five Centuries of the Pillage of a Continent

When Money Dies: The Nightmare of Deficit Spending, Devaluation, and Hyperinflation in Weimar Germany

Think Like a Freak: The Authors of Freakonomics Offer to Retrain Your Brain

The Cryptopians: Idealism, Greed, Lies, and the Making of the First Big Cryptocurrency Craze

A Little History of Economics

The Deficit Myth: Modern Monetary Theory and the Birth of the People's Economy

Dignity in a Digital Age: Making Tech Work for All of Us

The Color of Money: Black Banks and the Racial Wealth Gap

Oceans of Grain: How American Wheat Remade the World

The Sovereign Individual: Mastering the Transition to the Information Age

The Richest Man In Babylon

The Price of Tomorrow: Why Deflation is the Key to an Abundant Future

Price Wars: How the Commodities Markets Made Our Chaotic World

Coronavirus: Leadership and Recovery: The Insights You Need from Harvard Business Review

Economics in One Lesson: The Shortest and Surest Way to Understand Basic Economics

The Undoing Project: A Friendship That Changed Our Minds

Misbehaving: The Making of Behavioral Economics

Trillion Dollar Triage: How Jay Powell and the Fed Battled a President and a Pandemic---And Prevented Economic Disaster

The General Theory of Employment, Interest, and Money

Less Is More: How Degrowth Will Save the World

The Wealth of Nations

The Currency of Politics: The Political Theory of Money from Aristotle to Keynes

Small Is Beautiful: Economics as If People Mattered

The Privatization of Everything: How the Plunder of Public Goods Transformed America and How We Can Fight Back

Think Like a Freak: The Authors of Freakonomics Offer to Retrain Your Brain

The Worldly Philosophers: The Lives, Times, and Ideas of the Great Economic Thinkers

Hbr's 10 Must Reads on Managing Yourself, Vol. 2 (with Bonus Article Be Your Own Best Advocate by Deborah M. Kolb)

Devil Take the Hindmost: A History of Financial Speculation

Economics 101: From Consumer Behavior to Competitive Markets--Everything You Need to Know about Economics

Plagues Upon the Earth: Disease and the Course of Human History

The Illusion of Control: Why Financial Crises Happen, and What We Can (and Can't) Do about It

The Ravens: How to Prepare for and Profit from the Turbulent Times Ahead

Grand Transitions: How the Modern World Was Made

The Power of Regret: How Looking Backward Moves Us Forward (Large Print Edition)

The Big Reset Revised Edition: War on Gold and the Financial Endgame

The Limits to Growth: The 30-Year Update

Crashed: How a Decade of Financial Crises Changed the World

The Theory of Money and Credit

The Price of Peace: Money, Democracy, and the Life of John Maynard Keynes

Talking to My Daughter About the Economy

Boom Bust: House Prices, Banking and the Depression of 2010

The Fatal Conceit, 1: The Errors of Socialism

The Ledger and the Chain: How Domestic Slave Traders Shaped America

When Genius Failed: The Rise and Fall of Long-Term Capital Management

The Rational Optimist: How Prosperity Evolves

Beloved Economies: Transforming How We Work

The Undercover Economist, Revised and Updated Edition: Exposing Why the Rich Are Rich, the Poor Are Poor - And Why You Can Never Buy a Decent Used Car

A Short History of Financial Euphoria

Hbr's 10 Must Reads on Career Resilience (with Bonus Article Reawakening Your Passion for Work by Richard E. Boyatzis, Annie McKee, and Daniel Goleman

The Infinite Machine: How an Army of Crypto-Hackers Is Building the Next Internet with Ethereum

Free to Choose: A Personal Statement

Ages of American Capitalism: A History of the United States

Diminishing Returns: The New Politics of Growth and Stagnation

The Power of Creative Destruction: Economic Upheaval and the Wealth of Nations

The New Economics: A Manifesto

The Hydrogen Revolution: A Blueprint for the Future of Clean Energy

The Anti-Oligarchy Constitution: Reconstructing the Economic Foundations of American Democracy

Human Action: A Treatise on Economics

The Value of Everything: Making and Taking in the Global Economy

A Culture of Growth: The Origins of the Modern Economy

Tomorrow's Capitalist: My Search for the Soul of Business

Histories of the Future: Milestones in the Last 100 Years of Business Forecasting

The Global Minotaur: America, Europe and the Future of the World Economy

California Burning: The Fall of Pacific Gas and Electric--And What It Means for America's Power Grid

Human Action: A Treatise on Economics

Principles for Dealing with the Changing World Order: Why Nations Succeed or Fail

From Third World to First: Singapore and the Asian Economic Boom

Religion and the Rise of Capitalism

Doing Economics: What You Should Have Learned in Grad School--But Didn't

Cogs and Monsters: What Economics Is, and What It Should Be