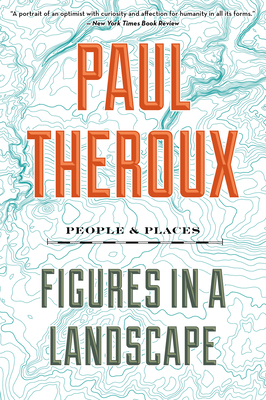 Figures in a Landscape: People and Places

A portrait of an optimist with curiosity and affection for humanity in all its forms.--The New York Times Book Review Theroux is at the top of his game with his third collection of essays, a magisterial grouping of intimate remembrances, globe-trotting adventures, and incisive literary critiques.--Publishers Weekly, Starred Review Theroux's observations are so keen and writerly skills so sharp that he butter-slices narratives with a razor-thin surgeon's scalpel, masterfully serving up both the world's dark underbelly and its gloriously uplifting sustenance of love, longing and wonder-lust. --Forbes Paul Theroux's latest collection of essays applies his signature searching curiosity to a life lived as much in reading as on the road. This writerly tour-de-force features a satisfyingly varied selection of topics. Travel essays take us to Ecuador, Zimbabwe, and Hawaii, to name a few. Gems of literary criticism reveal fascinating depth in the work of Henry David Thoreau, Muriel Spark, Joseph Conrad, and Hunter Thompson. And in a series of breathtakingly personal profiles, we take a helicopter ride with Elizabeth Taylor, go diagnosing with Oliver Sacks, eavesdrop on the day-to-day life of a Manhattan dominatrix, and explore New York with Robin Williams. An extended meditation on the craft of writing binds together this wide-ranging collection, along with Theroux's constant quest for the authentic in a person or in a place.

An Unexpected Light: Travels in Afghanistan

Across the Pond: An Englishman's View of America

Life on the Mississippi: An Epic American Adventure

The Serpent Coiled in Naples

A Place in the World: Finding the Meaning of Home

Into Thin Air: A Personal Account of the Mount Everest Disaster

From Here to Eternity: Traveling the World to Find the Good Death

How to Read Water: Clues and Patterns from Puddles to the Sea

Border Crossings: A Journey on the Trans-Siberian Railway

A Walk in the Woods: Rediscovering America on the Appalachian Trail

Pacific Coasting: A Guide to the Ultimate Road Trip, from Southern California to the Pacific Northwest

Destinations of a Lifetime: 225 of the World's Most Amazing Places

Leave Only Footprints: My Acadia-To-Zion Journey Through Every National Park

Four Seasons in Rome: On Twins, Insomnia, and the Biggest Funeral in the History of the World

Dispatches from the Gilded Age: A Few More Thoughts on Interesting People, Far-Flung Places, and the Joys of Southern Comforts

Troubled Water: A Journey Around the Black Sea

Imagine a City: A Pilot's Journey Across the Urban World

A Field Guide to Getting Lost

A Walk in the Woods: Rediscovering America on the Appalachian Trail

The Pilgrimage: A Contemporary Quest for Ancient Wisdom

Journey to Portugal: In Pursuit of Portugal's History and Culture

The Travels of Ibn Battutah

How to Read Nature: Awaken Your Senses to the Outdoors You've Never Noticed

Ultimate Journeys for Two: Extraordinary Destinations on Every Continent

The Curve of Time

Blue Highways: A Journey Into America

Tell My Horse: Voodoo and Life in Haiti and Jamaica

The End of the Golden Gate: Writers on Loving and (Sometimes) Leaving San Francisco

Why We Travel: 100 Reasons to See the World

Land's End: A Walk in Provincetown

The Iron Scar: A Father and Son in Siberia

The Colossus of New York

Notes from a Small Island

Books and Islands in Ojibwe Country: Traveling Through the Land of My Ancestors

The Old Ways: A Journey on Foot

The New York Times Explorer. 100 Trips Around the World

Letter to the Americans

Spirits of San Francisco: Voyages Through the Unknown City

A Hard Place to Leave: Stories from a Restless Life

Vagabonding: An Uncommon Guide to the Art of Long-Term World Travel /]crolf Potts

Island Wisdom: Hawaiian Traditions and Practices for a Meaningful Life

Beyond the Sunset, a travel memoir: Volume 1: Adventures Outside My Comfort Zone

The Year of Living Danishly: Uncovering the Secrets of the World's Happiest Country

Kingbird Highway: The Biggest Year in the Life of an Extreme Birder

Turn Right at Machu Picchu: Rediscovering the Lost City One Step at a Time

Confederates in the Attic: Dispatches from the Unfinished Civil War

The Only Kayak: A Journey Into the Heart of Alaska

Walking the High Desert: Encounters with Rural America Along the Oregon Desert Trail

We Came, We Saw, We Left: A Family Gap Year

Under the Tuscan Sun: 20th-Anniversary Edition

The Meaning of Travel: Philosophers Abroad

Best. State. Ever.: A Florida Man Defends His Homeland

Pocket Atlas of Remote Islands: Fifty Islands I Have Not Visited and Never Will

For the Love of Europe: My Favorite Places, People, and Stories

The Longest Silence: A Life in Fishing

You Are Here: Beaches: The Most Scenic Spots on Earth

What I Was Doing While You Were Breeding: A Memoir

The Road to Little Dribbling: Adventures of an American in Britain

You Are Here: Hikes: The Most Scenic Spots on Earth

The Geography of Bliss: One Grump's Search for the Happiest Places in the World

You Are Here: Camping: The Most Scenic Spots on Earth

French Dirt: The Story of a Garden in the South of France

The Almost Nearly Perfect People: Behind the Myth of the Scandinavian Utopia

Out There: The Wildest Stories from Outside Magazine

The Editors of Outside Magazine

Running in the Family

Life Is Golden: What I've Learned from the World's Most Adventurous Dogs

The Duchess of Bloomsbury Street

The Art of Travel

Travels with Charley in Search of America

No Reservations: Around the World on an Empty Stomach

Hacia Rutas Salvajes / Into the Wild

Two Trees Make a Forest: In Search of My Family's Past Among Taiwan's Mountains and Coasts

Tramp: Or the Art of Living a Wild and Poetic Life

Destination Wellness: Global Secrets for Better Living Wherever You Are

An African in Greenland

Neither Here Nor There:: Travels in Europe

My Venice and Other Essays

On the Plain of Snakes: A Mexican Journey

Trieste and the Meaning of Nowhere

The Summer Isles: A Voyage of the Imagination

Toward Beauty: Reigniting a Creative Life on the Camino de Santiago

The Land Where Lemons Grow: The Story of Italy and Its Citrus Fruit

The Colossus of Maroussi

Among Flowers: A Walk in the Himalaya

Never Can Say Goodbye: Writers on Their Unshakable Love for New York

Spirits of San Francisco: Voyages Through the Unknown City

Oh, Florida!: How America's Weirdest State Influences the Rest of the Country

The Travels of Ibn Battutah

Words from the Window Seat: The Everyday Magic of Kindness, Courage, and Being Your True Self

Life on the Mississippi: An Epic American Adventure

(Not Quite) Mastering the Art of French Living

Travels With John And Gwen: A Combat Medic and His Wife Explore the World After WWII

Going It Alone: Ramblings and Reflections from the Trail

Sea of Cortez: A Leisurely Journal of Travel and Research

The Age of Clear Profit: Essays on Home and the Narrow Road

I'm Off Then: Losing and Finding Myself on the Camino de Santiago

Black Lamb and Grey Falcon: A Journey Through Yugoslavia

The Places in Between

The National Road: Dispatches from a Changing America