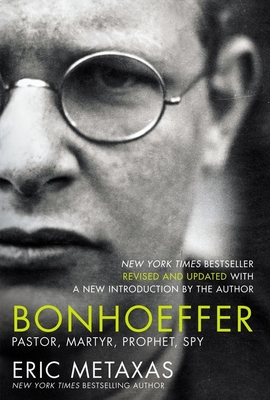 Who better to face the greatest evil of the 20th century than a humble man of faith?

As Adolf Hitler and the Nazis seduced a nation, bullied a continent, and attempted to exterminate the Jews of Europe, a small number of dissidents and saboteurs worked to dismantle the Third Reich from the inside. One of these was Dietrich Bonhoeffer, a pastor and author.

In this New York Times bestselling biography, Eric Metaxas takes both strands of Bonhoeffer's life--the theologian and the spy--and draws them together to tell a searing story of incredible moral courage in the face of monstrous evil.

In Bonhoeffer, Metaxas presents the fullest account of Bonhoeffer's life, including his:

This edition, revised and with a new introduction from the author, shares the deeply moving story through previously unavailable documents, including personal letters, detailed journal entries, and firsthand personal accounts to reveal never-before-seen dimensions of Bonhoeffer's life and work.

Metaxas has created a biography of uncommon power--intelligent, moving, well researched, vividly written, and rich in implication for our own lives. Or to put it another way: Buy this book. Read it. Then buy another copy and give it to a person you love. It's that good. --Archbishop Charles Chaput, author, First Things

Metaxas presents Bonhoeffer as a clear-headed, deeply convicted Christian who submitted to no one and nothing except God and his Word. --Christianity Today

Metaxas has written a book that adds a new dimension to World War II, a new understanding of how evil can seize the soul of a nation and a man of faith can confront it. --Thomas Fleming, author, The New Dealers' War

I Dared to Call Him Father: The Miraculous Story of a Muslim Woman's Encounter with God

Journey of Our Love

To Love and Be Loved: A Personal Portrait of Mother Teresa

Padre Pio: Stories and Memories of My Mentor and Friend

Brazen: My Unorthodox Journey from Long Sleeves to Lingerie

Surprised by Joy: The Shape of My Early Life

The Demonologist: The Extraordinary Career of Ed and Lorraine Warren

What If Love Is the Point?: Living for Jesus in a Self-Consumed World

Same Kind of Different as Me: A Modern-Day Slave, an International Art Dealer, and the Unlikely Woman Who Bound Them Together

Muhammad: A Prophet for Our Time

The Pilgrimage: A Contemporary Quest for Ancient Wisdom

The Mothers and Daughters of the Bible Speak: Lessons on Faith from Nine Biblical Families (Large Print Edition)

The Pope and the Holocaust: Pius XII and the Secret Vatican Archives

Bittersweet: Faith Lost and Found, and the DNA Test that Brought a Baby Back to Life

God's Generals, 1: Why They Succeeded and Why Some Fail

Infant Jesus of Prague: Prayers to the Infant Jesus for All Occasions with a Short History of the Devotion

An American Martyr in Persia: The Epic Life and Tragic Death of Howard Baskerville

Glory to God in the Lowest: Journeys to an Unholy Land

I Loved Jesus in the Night: Teresa of Calcutta--A Secret Revealed

Bruchko: The Astonishing True Story of a 19-Year-Old American, His Capture by the Motilone Indians and His Adventures in Christ

Where the Light Fell: A Memoir

These Strange Ashes: Is God Still in Charge?

A Circle of Quiet

Paschal Paradox: Reflections on a Life of Spiritual Evolution

Dearest Sister Wendy: A Suprising Story of Faith and Friendship

Sing, Dance and Pray: The Inspirational Story of Srila Prabhupada Founder-Acharya of Iskcon

The Road to Jonestown: Jim Jones and Peoples Temple

The Autobiography of a Hunted Priest

Shackled: One Woman's Dramatic Triumph Over Persecution, Gender Abuse, and a Death Sentence

The Song of Bernadette

Kisses from Katie: A Story of Relentless Love and Redemption

A Spring in Sinai: Hieromartyr Mina Abood: His Life, Miracles, and Martyrdom in Post-Revolution Egypt

An Altar in the World: A Geography of Faith

The Autobiography of a Yogi: The Classic Story of One of India's Greatest Spiritual Thinkers

Complete Francis of Assisi: His Life, the Complete Writings, and the Little Flowers

Memoirs of a Happy Failure

Loved as I Am

The Song of Ascents: Lives of Rage and Stillness

Blood Covenant: The Story of the Mafia Prince Who Publicly Quit the Mob and Lived

John Fisher and Thomas More: Keeping Their Souls While Losing Their Heads

Something Other Than God: How I Passionately Sought Happiness and Accidentally Found It

Choices: Like waves going to distant shores, will we ever really understand the consequences of our choices?

A Song for Nagasaki: The Story of Takashi Nagai: Scientist, Convert, and Survivor of the Atomic Bomb

My Life with the Saints

Gratitude and Grit: The Life of Blessed Solanus Casey

To Tell the Truth

The White Stone: The Art of Letting Go

Evidence Not Seen: A Woman's Miraculous Faith in the Jungles of World War II

Out of the Devil's Cauldron

A Pathway under the Gaze of Mary: Biography of Sister Maria Lucia of Jesus and the Immaculate Heart

The Little Book of Saints

A Million Miles in a Thousand Years: How I Learned to Live a Better Story

Brothers in the Beloved Community: The Friendship of Thich Nhat Hanh and Martin Luther King Jr.

The September Pope: The Final Days of John Paul I

Now and Then: A Memoir of Vocation

I Believe: My Testimony of Yeshua Jesus the Messiah

The Cheese and the Worms: The Cosmos of a Sixteenth-Century Miller

Something Beautiful for God

Kateri - A Beacon in the Wilderness

Benedict XVI: Defender of the Faith

Heir to the Crescent Moon

To Heaven and Back: A Doctor's Extraordinary Account of Her Death, Heaven, Angels, and Life Again: A True Story

The Works of His Hands: A Scientist's Journey from Atheism to Faith

Lord of the Ring: A Journey in Search of Count Zinzendorf

The Story of a Soul: The Autobiography of St. Therese of Lisieux

Victory in the Wait: My journey to unwavering faith

The Sharp End of Shard End: A true story

Rosanna of the Amish

The Pursuit of Porsha: How I Grew Into My Power and Purpose

Real People: At the Pinnacle with Irmis Popoff and the Second Basic Course at Sherborne House with J.G. Bennett: A Memoir

Journey to the West: One Man's Odyssey into His Own Mind

A Man of the Beatitudes: Pier Giorgio Frassati

The Flame of Love

I Am Worthy!: My Journey to Salvation...

Fish Out of Water: A Search for the Meaning of Life

They Found the Secret: Twenty Lives That Reveal a Touch of Eternity

Shirt of Flame: A Year with St. Therese of Lisieux

To Mary with Love

A Holy Life: The Writings of Saint Bernadette of Lourdes

From Wearn Street to Mahogany Row: Sitting on the doorsteps of yesterday Wondering what tomorrow will bring A Journey from not being Qualified To bein

The Story of the Holy Prophet Muhammad: Ramadan Classics: 30 Stories for 30 Nights

Surprised by Truth: 11 Converts Give the Biblical and Historical Reasons for Becoming Catholic

An Autobiography Or The Story of My Experiments With Truth

Said I Wasn't Gonna Tell Nobody: The Making of a Black Theologian

Strength for the Fight: The Life and Faith of Jackie Robinson

A Chance to Die: The Life and Legacy of Amy Carmichael

No Man Knows My History: The Life of Joseph Smith

A Burning in My Bones: The Authorized Biography of Eugene H. Peterson, Translator of the Message

They Shall See God: Eyeglasses, evangelism and a mission to serve the poor.

The Cross and the Switchblade

The Great Good Thing: A Secular Jew Comes to Faith in Christ

From the End Zone to a Wheelchair: How I Met God