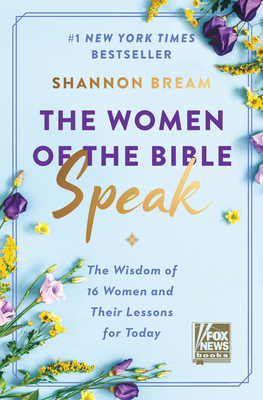 The women of the Bible lived timeless stories--by examining them, we can understand what it means to be a woman of faith.

People unfamiliar with Scripture often assume that women play a small, secondary role in the Bible. But in fact, they were central figures in numerous Biblical tales. It was Queen Esther's bravery at a vital point in history which saved her entire people. The Bible contains warriors like Jael, judges like Deborah, and prophets like Miriam. The first person to witness Jesus' resurrection was Mary Magdalene, who promptly became the first Christian evangelist, eager to share the news which would change the world forever.

In The Women of the Bible Speak, Fox News Channel's Shannon Bream opens up the lives of sixteen of these Biblical women, arranging them into pairs and contrasting their journeys. In pairing their stories, Shannon helps us reflect not only on the meaning of each individual's life, but on how they relate to each other and to us.

From the shepherdesses of ancient Israel who helped raise the future leaders of the people of God, to the courageous early Christians, the narrative of the Bible offers us many vivid and fascinating female characters. In their lives we can see common struggles to resist bitterness, despair, and pride, and to instead find their true selves in faith, hope, and love. In studying these heroes of the faith, we can find wisdom and warnings for how to better navigate our own faith journeys.

The Women of the Bible Speak outlines the lessons we can take from the valor of Esther, the hope of Hannah, the audacity of Rahab, and the faith of Mary. In broadening each woman's individual story, Shannon offers us a deeper understanding of each, and wisdom and insights that can transform our own lives today.

The World of Marian Apparitions: Mary's Appearances and Messages from Fatima to Today

The Power of Thoughts

I've Been Here Before: When Souls of the Holocaust Return

The Seven Gifts of the Holy Spirit

If God Is Love, Don't Be a Jerk: Finding a Faith That Makes Us Better Humans

Painting With Ashes: When Your Weakness Becomes Your Superpower

What is Life? (Canto Classics)

How to be filled with the Holy Spirit

Repentance: Breaking the Habit of Sin

Game of Life and How to Play It

The Genesis of Gender: A Christian Theory

The Greatest Gift: Unwrapping the Full Love Story of Christmas

With The Heart In Mind

The St. Gallen Mafia: Exposing the Secret Reformist Group Within the Church

Made for Love: Same-Sex Attraction and the Catholic Church

The Chosen Study, Season One: Water for the Thirsty

A Harmony of the Gospels: Based on the Broadus Harmony in the Revised Version

When Your World Falls Apart: See Past the Pain of the Present

Finding Peace: God's Promise of a Life Free from Regret, Anxiety, and Fear

The Practice of the Presence of God

Manipulation: Cutting the Strings of Control

The Angels: God's Messengers and Our Helpers

What on Earth Am I Here For? Purpose Driven Life (Large Print Edition)

Crucified by Christians: Experiencing the Cross as Seen from the Father

How to Heal the Sick

Anger: Wisdom for Cooling the Flames

In the Shelter: Finding a Home in the World

Surprised by Joy: The Shape of My Early Life