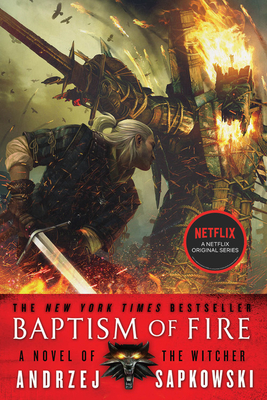 NOW A NETFLIX ORIGINAL SERIES A deadly coup within the Wizard's Guild leaves the Witcher, Geralt of Rivia, gravely injured, and his ward Ciri missing in the third novel of Andrzej Sapkowski's New York Times bestselling series that inspired the hit Netflix show and the blockbuster video games. The Wizards Guild has been shattered by a coup and, in the uproar, Geralt was seriously injured. The Witcher is supposed to be a guardian of the innocent, a protector of those in need, a defender against powerful and dangerous monsters that prey on men in dark times. But now that dark times have fallen upon the world, Geralt is helpless until he has recovered from his injuries. While war rages across all of the lands, the future of magic is under threat and those sorcerers who survive are determined to protect it. It's an impossible situation in which to find one girl--Ciri, the heiress to the throne of Cintra--until a rumor places her in the Niflgaard court, preparing to marry the Emperor. Injured or not, Geralt has a rescue mission on his hands. Look out for The Tower of Fools, book one of Andrzej Sapkowski's Hussite Trilogy, available now! Witcher collections
The Last Wish
Sword of Destiny Witcher novels
Blood of Elves
The Time of Contempt
Baptism of Fire
The Tower of Swallows
Lady of the Lake
​Season of Storms Hussite Trilogy
The Tower of Fools The Malady and Other Stories: An Andrzej Sapkowski Sampler (e-only) Translated from original Polish by David French

The Winter of the Witch

Our Lady of Mysterious Ailments

A Clash of Kings

Nevernight: Book One of the Nevernight Chronicle

The Invention of Morel

The Illuminatus! Trilogy: The Eye in the Pyramid, the Golden Apple, Leviathan

The Fate of the Tearling

The Hidden Girl and Other Stories

The Path of Thorns

The Light of the Midnight Stars

The Shadow Rising: Book Four of 'The Wheel of Time'

Mind of My Mind

A Portrait of the Artist as a Young Man

Three Moments of an Explosion: Stories

Gentlemen of the Road: A Tale of Adventure [Title Page Only]

The Erstwhile: The Vorrh (2)

Where the Drowned Girls Go