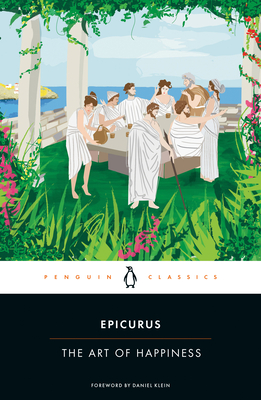 The brilliant writings of a highly influential Greek philosopher, with a foreword by Daniel Klein, author of Travels with Epicurus

The teachings of Epicurus--about life and death, religion and science, physical sensation, happiness, morality, and friendship--attracted legions of adherents throughout the ancient Mediterranean world and deeply influenced later European thought. Though Epicurus faced hostile opposition for centuries after his death, he counts among his many admirers Thomas Hobbes, Thomas Jefferson, Karl Marx, and Isaac Newton. This volume includes all of his extant writings--his letters, doctrines, and Vatican sayings--alongside parallel passages from the greatest exponent of his philosophy, Lucretius, extracts from Diogenes Laertius' Life of Epicurus, a lucid introductory essay about Epicurean philosophy, and a foreword by Daniel Klein, author of Travels with Epicurus and coauthor of the New York Times bestseller Plato and a Platypus Walk into a Bar. For more than sixty-five years, Penguin has been the leading publisher of classic literature in the English-speaking world. With more than 1,500 titles, Penguin Classics represents a global bookshelf of the best works throughout history and across genres and disciplines. Readers trust the series to provide authoritative texts enhanced by introductions and notes by distinguished scholars and contemporary authors, as well as up-to-date translations by award-winning translators.

On Truth and Untruth: Selected Writings

The Mystery of Consciousness

Civilized to Death: The Price of Progress

The Labyrinth: An Existential Odyssey with Jean-Paul Sartre

But What If We're Wrong?: Thinking about the Present as If It Were the Past

On the Abolition of All Political Parties

A Brief History of Infinity: The Quest to Think the Unthinkable

The Gay Science: With a Prelude in Rhymes and an Appendix of Songs

Why I Am Not a Christian: And Other Essays on Religion and Related Subjects

The Consolations of Philosophy

Why I Am So Wise

Free Will as an Open Scientific Problem

The Sunflower: On the Possibilities and Limits of Forgiveness

The Te of Piglet

What We See When We Read

The Present Age: On the Death of Rebellion

Marx: Towards the Centre of Possibility

The Last Man Takes LSD: Foucault and the End of Revolution

The Republic: The Complete and Unabridged Jowett Translation

Awakening the Buddha Within: Eight Steps to Enlightenment

Aristotle's Way: How Ancient Wisdom Can Change Your Life

Rising Up and Rising Down: Some Thoughts on Violence, Freedom and Urgent Means

On Getting Off: Sex and Philosophy

The Philosophy of Jean-Paul Sartre

Authority and Freedom: A Defense of the Arts

Y'All Means All: The Emerging Voices Queering Appalachia

The Case for Rage: Why Anger Is Essential to Anti-Racist Struggle

I Think, Therefore I Draw: Understanding Philosophy Through Cartoons

Anti-Education: On the Future of Our Educational Institutions

Theories of Ideology: The Powers of Alienation and Subjection

The News: A User's Manual

Why Does the World Exist?: An Existential Detective Story

A Primer for Forgetting: Getting Past the Past

Irl: Finding Realness, Meaning, and Belonging in Our Digital Lives

The Sea Is Rising and So Are We: A Climate Justice Handbook

Ethical Vegan: A Personal and Political Journey to Change the World

On Decline: Stagnation, Nostalgia, and Why Every Year Is the Worst One Ever

One Swallow Does Not Make a Summer

Foucault in California: [A True Story--Wherein the Great French Philosopher Drops Acid in the Valley of Death]

Cultural Amnesia: Necessary Memories from History and the Arts

When Einstein Walked with Gödel: Excursions to the Edge of Thought

Cultural Amnesia: Necessary Memories from History and the Arts

Passion of the Western Mind: Understanding the Ideas That Have Shaped Our World View

Consilience: The Unity of Knowledge

The Analects of Confucius: A Philosophical Translation

The Living Thoughts of Kierkegaard

Frames of War: When Is Life Grievable?

Taking the Path of Zen

The Pig That Wants to Be Eaten: 100 Experiments for the Armchair Philosopher

Lila: An Inquiry Into Morals

The Old Is Dying and the New Cannot Be Born: From Progressive Neoliberalism to Trump and Beyond

How to Survive the Modern World: Making Sense Of, and Finding Calm In, Unsteady Times

Life of School the