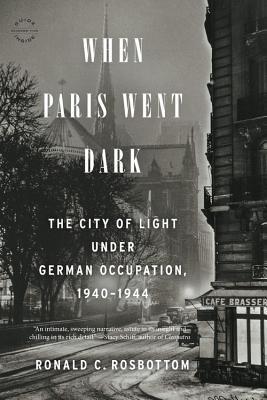 The spellbinding and revealing chronicle of Nazi-occupied Paris. On June 14, 1940, German tanks entered a silent and nearly deserted Paris. Eight days later, France accepted a humiliating defeat and foreign occupation. Subsequently, an eerie sense of normalcy settled over the City of Light. Many Parisians keenly adapted themselves to the situation-even allied themselves with their Nazi overlords. At the same time, amidst this darkening gloom of German ruthlessness, shortages, and curfews, a resistance arose. Parisians of all stripes -- Jews, immigrants, adolescents, communists, rightists, cultural icons such as Colette, de Beauvoir, Camus and Sartre, as well as police officers, teachers, students, and store owners -- rallied around a little known French military officer, Charles de Gaulle. When Paris Went Dark evokes with stunning precision the detail of daily life in a city under occupation, and the brave people who fought against the darkness. Relying on a range of resources -- memoirs, diaries, letters, archives, interviews, personal histories, flyers and posters, fiction, photographs, film and historical studies -- Rosbottom has forged a groundbreaking book that will forever influence how we understand those dark years in the City of Light.

Vive La Revolution: A Stand-Up History of the French Revolution

Knights and Peasants: The Hundred Years War in the French Countryside

The Last Baron: The Paris Kidnapping That Brought Down an Empire

The War: A Memoir

Mummified: The stories behind Egyptian mummies in museums

Paris and Her Cathedrals

The Paris Commune: A Brief History

The Riviera Set: Glitz, Glamour, and the Hidden World of High Society

Diaghilev's Empire: How the Ballets Russes Enthralled the World

Parisians: An Adventure History of Paris

Soldiers and Buccaneers of the Sun King 1643-1715: West Indies and Latin America

Rousseau, Burke, and Revolution in France, 1791

The Last Revolutionaries: The Conspiracy Trial of Gracchus Babeuf and the Equals

A Great Improvisation: Franklin, France, and the Birth of America

Gay Liberation After May '68

A Woman of No Importance: The Untold Story of the American Spy Who Helped Win World War II (Large Print Edition)

The Mapmaker's Wife: A True Tale of Love, Murder, and Survival in the Amazon

A Scented Palace: The Secret History of Marie Antoinette's Perfumer

Robespierre: The Man Who Divides Us the Most

Blood Royal: A True Tale of Crime and Detection in Medieval Paris

Shadows in the Vineyard: The True Story of the Plot to Poison the World's Greatest Wine

The Fountain of Latona: Louis XIV, Charles Le Brun, and the Gardens of Versailles

Syria and Lebanon 1941: The Allied Fight Against the Vichy French

The Hollow Years: France in the 1930s

Medieval Song from Aristotle to Opera

The Beach Beneath the Street: The Everyday Life and Glorious Times of the Situationist International

From Deficit to Deluge: The Origins of the French Revolution

The Coming of the French Revolution

The Stones of Balazuc: A French Village Through Time

The Giant of the French Revolution: Danton, a Life

History of France: A Captivating Guide to French History

Napoleon's Glance: The Secret of Strategy

The Seventh Member State: Algeria, France, and the European Community

Paris and the Birth of Public Knowledge

After the Romanovs: Russian Exiles in Paris from the Belle Époque Through Revolution and War (Large Print Edition)

French Warships in the Age of Sail, 1786-1862: Design, Construction, Careers and Fates

History of France: A Captivating Guide to French History