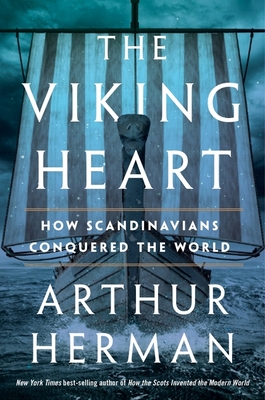 A stirring investigation of the Scandinavian influence on our times, both past and present. You won't look at the world the same way again.--Neal Bascomb, New York Times best-selling author of The Winter Fortress

From a New York Times best-selling historian and Pulitzer Prize finalist, a sweeping epic of how the Vikings and their descendants have shaped history and America Scandinavia has always been a world apart. For millennia Norwegians, Danes, Finns, and Swedes lived a remote and rugged existence among the fjords and peaks of the land of the midnight sun. But when they finally left their homeland in search of opportunity, these wanderers--including the most famous, the Vikings--would reshape Europe and beyond. Their ingenuity, daring, resiliency, and loyalty to family and community would propel them to the gates of Rome, the steppes of Russia, the courts of Constantinople, and the castles of England and Ireland. But nowhere would they leave a deeper mark than across the Atlantic, where the Vikings' legacy would become the American Dream.

In The Viking Heart, Arthur Herman melds a compelling historical narrative with cutting-edge archaeological and DNA research to trace the epic story of this remarkable and diverse people. He shows how the Scandinavian experience has universal meaning, and how we can still be inspired by their indomitable spirit.

Children of Ash and Elm: A History of the Vikings

The Real Valkyrie: The Hidden History of Viking Warrior Women

The Seed of Yggdrasill

River Kings: A New History of the Vikings from Scandinavia to the Silk Roads

Trollru&#769;n: A Discourse on Trolldom and Runes in the Northern Tradition

The Last Viking: The True Story of King Harald Hardrada

The Age of the Vikings

Men of Terror: A Comprehensive Analysis of Viking Combat

Historiola: The Power of Narrative Charms

Heimskringla: History of the Kings of Norway

A Family of Kings: The Descendants of Christian IX of Denmark

Valkyrie: The Women of the Viking World

A Handbook of Norse Mythology

We Die Alone: A WWII Epic of Escape and Endurance

The Normans: A History of Conquest

For the Love of Cod: A Father and Son's Search for Norwegian Happiness

The Family Tree Scandinavian Genealogy Guide: How to Trace Your Ancestors in Denmark, Sweden, and Norway

The 12th Man: A WWII Epic of Escape and Endurance

The Viking Great Army and the Making of England

The Sámi Peoples of the North: A Social and Cultural History

Valkyrie: The Women of the Viking World

Laughing Shall I Die: Lives and Deaths of the Great Vikings

How to Be Danish: A Journey to the Cultural Heart of Denmark

Ivory Vikings: The Mystery of the Most Famous Chessmen in the World and the Woman Who Made Them

Six Days in August: The Story of Stockholm Syndrome

Beyond the North Wind: The Fall and Rise of the Mystic North

Sea Monsters: A Voyage Around the World's Most Beguiling Map

The Vikings: A History

Children of Ash and ELM: A History of the Vikings

Riding the Wave: Sweden's Integration into the Imperialist World System

One of Us: The Story of a Massacre in Norway -- And Its Aftermath

A Concise History of Sweden

Across the Deep Blue Sea: The Saga of Early Norwegian Immigrants

Pirates Then & Now: Notorious Outlaws of the Sea

The Mästermyr Find: A Viking Age Tool Chest from Gotland

The Travels of Reverend Olafur Egilsson: The Story of the Barbary Corsair Raid on Iceland in 1627

The Little Book of the Icelanders in the Old Days

The Oxford Illustrated History of the Vikings

Seawomen of Iceland: Survival on the Edge

The Yellow Star That Wasn't: Scandinavia, Miami, and Me. Wartime Jews in Scandinavia; From Helsinki to a Miami Beach Obsession.

A History of the Vikings

A Concise History of Finland

History of the Vikings: A Captivating Guide to the Viking Age and Feared Norse Seafarers Such as Ragnar Lothbrok, Ivar the Boneless, Egil Skal

Christina, Queen of Sweden: The Restless Life of a European Eccentric

Muhammad and the Origin of Islam in the Byzantine-Slavic Literary Context: A Bibliographical History

The Northern Conquest: Vikings in Britain and Ireland

Remedies and Rituals: Folk Medicine in Norway and the New Land

A History of the Swedish People, 2: Volume II: From Renaissance to Revolution

The Vikings: A Very Short Introduction

The world of Cajsa Andersdotter: A close-up view of Sweden in the 18th and 19th century

History of the Vikings: A Captivating Guide to the Viking Age and Feared Norse Seafarers Such as Ragnar Lothbrok, Ivar the Boneless, Egil Skal

Beyond the Northlands: Viking Voyages and the Old Norse Sagas

The Hansa Towns and the Hanseatic League

My Ancestors Are Reindeer Herders and I Am Melting In Extinction: Saami-American Non-Fiction, Fiction, and Poetry

Six Days in August: The Story of Stockholm Syndrome

Song of the Vikings: Snorri and the Making of Norse Myths

The Poetic Edda: A Collection of Old Norse Poems

Sweden, the Swastika and Stalin: The Swedish Experience in the Second World War

Asatru: The Ultimate Guide to Norse Paganism, Heathenry, and Asatru for Beginners

Daughters of the Trade: Atlantic Slavers and Interracial Marriage on the Gold Coast

The Vikings: Wolves of War

Finland at War: The Continuation and Lapland Wars 1941-45

Ragnar Lothbrok: A Legendary Viking Warrior, His Family, and His Legacy

Hitler's Savage Canary: A History of the Danish Resistance in World War II

A History of the Swedish People, 1: Volume 1: From Prehistory to the Renaissance

Saxons vs. Vikings: Alfred the Great and England in the Dark Ages

Thraldom: A History of Slavery in the Viking Age

The Cult of Saints in Nidaros Archbishopric: Manuscripts, Miracles, Objects

The Vikings in Iceland: The History of the Norse Expeditions and Settlements across Iceland

Crossing Borders: From Refugee to Freedom Fighter and Beyond My Life Story

From Day to Day: One Man's Diary of Survival in Nazi Concentration Camps

An Icelandic Literary Florilegium: A Festschrift in Honor of Úlfar Bragason

Kept from All Contagion

Mission To The North

Scandinavia in the Age of Vikings

The Jotunbok: Working with the Giants of the Northern Tradition

Cross & Scepter: The Rise of the Scandinavian Kingdoms from the Vikings to the Reformation

How to Live Icelandic

The Poetic Edda: The Two Volumes in One Book

The Vikings and Their Age

The Vikings: From Odin to Christ

Norse Mythology: Thor, Odin, Loki, and the Other Gods and Heroes

Icelanders in the Viking Age: The People of the Sagas

Illuminated Manuscript Production in Medieval Iceland: Literary and Artistic Activities of the Monastery at Helgafell in the Fourteenth Century

The Norwegian Invasion of England in 1066

The Viking Hondbók: Eat, Dress, and Fight Like a Warrior

Vikings: Legendary Warriors of the Land and Sea

The First Crossing of Greenland

Narvik 1940: The Battle for Northern Norway

A History of the Vikings

Histories of the Unexpected: The Vikings

Violence and Risk in Medieval Iceland: This Spattered Isle

The Poetic Edda: A Collection of Old Norse Anonymous Poems

[The] Swede: The Very Unofficial guide to the Swedes

The Faroe Islands: Interpretations of History

Norse Mythology: A Fascinating Guide to Understanding the Sagas, Gods, Heroes, and Beliefs of the Vikings

Seawomen of Iceland: Survival on the Edge

The Little Stream of Straum

Norse Mythology: To the Gates of Valhalla - A Journey Through the Twisted Mythology of the Norse Peoples

The Medieval Archive of Antisemitism in Nineteenth-Century Sweden

The Monocle Book of the Nordics

A Short History of the Renaissance in Northern Europe

The Development of Education in Medieval Iceland

The Goths: A Captivating Guide to the Visigoths and Ostrogoths Who Sacked Rome and Played an Essential Role in the Fall of the We

The Power of Song: Nonviolent National Culture in the Baltic Singing Revolution

A Handbook of Scandinavian Names

Iceland Imagined: Nature, Culture, and Storytelling in the North Atlantic

Norse Mythology: The Norse Gods And The Nine Worlds

The Vikings and the Victorians: Inventing the Old North in Nineteenth-Century Britain

The Languages of Scandinavia: Seven Sisters of the North

Mythology and Nation Building: N.F.S. Grundtvig and His European Contemporaries

The History of Iceland: A Fascinating Guide to this Beautiful Country

The History of Sweden: A Fascinating Guide to this Scandinavian Country