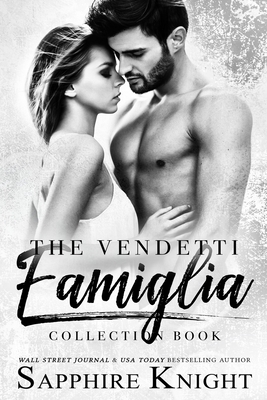 Empire - They're the Vendetti crime famiglia, the most powerful mafia name in New York...
Matteo Vendetti is a man who gets what he wants. As heir to the Vendetti Empire and the Capo dei capi's throne, he's only required to do one thing. He must get married to prove that he's matured and is stable enough to take over. The stipulation doesn't sound like much of a challenge until he realizes who his betrothed is. Violet's the Bottaro princess, not just a random woman he met by chance in another country. She's young-too young by his standards. She's headstrong-a problem for a dominant man like Matteo. She's desirable-the biggest issue of all.
Before long, Matteo's questioning himself, wondering if Violet's really such a burden, or if just maybe, he's falling in love with something other than the Empire.

Queen - Violet Vendetti was the Bottaro princess-- was.
She'd been betrothed to the Capo dei capi of New York, without ever knowing it.
A deal made, is a deal kept, as far as the Vendetti Crime family is concerned. No
matter that it was her father to plead for her safety offering up her hand in marriage
amongst other promises. The Capo always comes to collect what is owed.
Violet is swept away into a world she thought she knew, only to discover everything
isn't what it may seem. From family traditions to deals struck, she learns exactly what
it takes to be the Vendetti queen.

Seven - Cristiano Vendetti, I wear the name proudly. I'm Italian royalty, damn near untouchable. The crux of being Vendetti is The Empire. A family of my stature has certain obligations. One of them practically archaic, as our betrothals are decided for us. Whatever to benefit the famiglia, right? I'm mafioso, trained to do as I'm told on all accounts.
I'm rewarded with Arianna, as she's always been my choice. The woman is more of a curse in my case, as I'm already a married man. While mistresses are a common occurrence in the life, Ari is dead set on making me struggle for breaking her heart. There's also the problem of Sofia, my wife. Do I kill her and be done with it, or give her to my brothers?

Coward - I'm a coward. The second-born son of the powerful Vendetti mafia famiglia. Vengeance and fearlessness should run in my blood.
They say I'm a liability, an addict, the embarrassment of the famiglia. None of them know the weight I bear, the guilt clawing in my gut for trying to escape it all. I'll never be underboss, that I'm certain of. Yet, my life changes in a mere moment when I discover I have a daughter. She's someone to live for and protect, an innocent baby depending on me.
The nanny comes into my life soon after, testing my resilience. She's a new temptation, a craving I shouldn't desire. I'm faced with more choices, none of them simple. Succumbing to my addiction is the easy way out, but I'm finally ready to fight. I'm Salvatore Vendetti, and I'm done being the coward.

Praise for the Vendetti Famiglia -
WOW! Matteo and his brothers are HOT! By the time you finish The Vendetti Empire you're not going to know which one you love the most. I'll happily take them all! - Victoria Ashley, New York Times Bestselling Author

Holy hotness batman, what did I just read! I won't spoil a single thing as this is one book you should truly read blind. Don't have a single thought as you open the book and devour the pages. There is nothing more b*d*ss than a crime family romance for me. I just can't get enough. Sapphire Knight draws you into this world with these strong characters and takes you deep into this place page by page. I couldn't stop and I'm dying for more!
- Author Chelsea Camaron

The League of Gentlewomen Witches

The Happy Ever After Playlist

Echoes Among the Stones

Diary of an Oxygen Thief

You Deserve Each Other

It Had to Be You

How to Fake It in Hollywood

The Storied Life of A. J. Fikry

Circling Back to You

Bringing Down the Duke

Love in Color: Mythical Tales from Around the World, Retold

The Viscount Who Loved Me [Tv Tie-In]: Bridgerton

The Girl on the Train

A Lady's Guide to Mischief and Mayhem

A Lady's Formula for Love

Nine Rules to Break When Romancing a Rake

How to Fail at Flirting

A Widow for One Year

The Murder of Mr. Wickham

A Brush with Love

Lucie Yi Is Not a Romantic

Red Is My Heart

Love, Chai, and Other Four-Letter Words

Booked on a Feeling