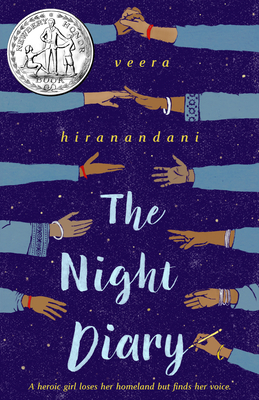 A 2019 NEWBERY HONOR BOOK A gripping, nuanced story of the human cost of conflict appropriate for both children and adults.
-Kirkus, starred review In the vein of Inside Out and Back Again and The War That Saved My Life comes a poignant, personal, and hopeful tale of India's partition, and of one girl's journey to find a new home in a divided country It's 1947, and India, newly independent of British rule, has been separated into two countries: Pakistan and India. The divide has created much tension between Hindus and Muslims, and hundreds of thousands are killed crossing borders. Half-Muslim, half-Hindu twelve-year-old Nisha doesn't know where she belongs, or what her country is anymore. When Papa decides it's too dangerous to stay in what is now Pakistan, Nisha and her family become refugees and embark first by train but later on foot to reach her new home. The journey is long, difficult, and dangerous, and after losing her mother as a baby, Nisha can't imagine losing her homeland, too. But even if her country has been ripped apart, Nisha still believes in the possibility of putting herself back together. Told through Nisha's letters to her mother, The Night Diary is a heartfelt story of one girl's search for home, for her own identity...and for a hopeful future.

I Will Always Love You: Keepsake Gift Book for Mother and New Baby

Guess How Much I Love You

The Runaway Bunny Board Book

Besos for Baby: A Little Book of Kisses

The Night Before Thanksgiving

It's Not Easy Being a Bunny

I Am a Big Brother

The Wonderful Things You Will Be

Are You My Mother?

On the Night You Were Born

I Am a Big Sister

My Milk Will Go, Our Love Will Grow: A Book for Weaning

Who Are Your People?

My Dad Is Amazing (a Hello!lucky Book)

Dawn and the Impossible Three: A Graphic Novel (the Baby-Sitters Club #5): Full-Color Editionvolume 5

Song for a Whale

Wherever You Are: My Love Will Find You

From the Desk of Zoe Washington

Everyone's Sleepy But the Baby

Dog's First Baby: A Board Book

I Can Make This Promise

How to Babysit a Grandpa

My Mom Is Magical (a Hello!lucky Book)

Dear Girl,: A Celebration of Wonderful, Smart, Beautiful You!

Tales of a Fourth Grade Nothing

Everything Sad Is Untrue: (A True Story)

How Many Stars in the Sky?

A Gift for Nana

Everything Will Be Ok

I Love Dad with the Very Hungry Caterpillar

My Neighbor Totoro: The Novel

Love Is: (Illustrated Story Book about Caring for Others, Book about Love for Parents and Children, Rhyming Picture Book)

The Land of Stories: A Grimm Warning

I Love You, Little Pookie

Why a Daughter Needs a Dad

How to Babysit a Grandma

A Shelter in Our Car

On the Edge of the Dark Sea of Darkness

As Brave as You

The Secret Garden: A Graphic Novel

The Vanderbeekers of 141st Street

Flora and Ulysses: The Illuminated Adventures

When Aidan Became a Brother

Love You by Heart

The Mysterious Benedict Society and the Prisoner's Dilemma

Get Me Out of Here!

We're Going on an Egg Hunt: A Lift-The-Flap Adventure

The Remarkable Journey of Coyote Sunrise

Here We Are: Notes for Living on Planet Earth

I Sang You Down from the Stars

Playing the Cards You're Dealt

The Fowl Twins Get What They Deserve

Baby Boy, What Will You Be?

Santa in the City

Isaiah Dunn Is My Hero

Time for Bed Board Book

Your Baby's First Word Will Be Dada