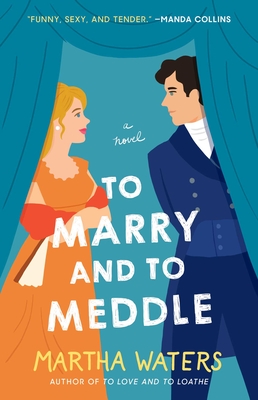 To Marry and to Meddle

Sure to delight Bridgerton fans. --USA TODAY The sweet, sexy, and utterly fun (Emily Henry, author of People We Meet on Vacation) Regency Vows series continues with a witty, charming, and joyful novel following a seasoned debutante and a rakish theater owner as they navigate a complicated marriage of convenience. Lady Emily Turner has been a debutante for six seasons now and should have long settled into a suitable marriage. However, due to her father's large debts, her only suitor is the persistent and odious owner of her father's favorite gambling house. Meanwhile, Lord Julian Belfry, the second son of a marquess, has scandalized society as an actor and owner of a theater--the kind of establishment where men take their mistresses, but not their wives. When their lives intersect at a house party, Lord Julian hatches a plan to benefit them both. With a marriage of convenience, Emily will use her society connections to promote the theater to a more respectable clientele and Julian will take her out from under the shadows of her father's unsavory associates. But they soon realize they have very different plans for their marriage--Julian wants Emily to remain a society wife, while Emily discovers an interest in the theater. But when a fleeing actress, murderous kitten, and meddlesome friends enter the fray, Emily and Julian will have to confront the fact that their marriage of convenience comes with rather inconvenient feelings. With an arch sense of humor and a marvelously witty voice that rivals the best of the Regency authors (Entertainment Weekly), Martha Waters crafts another fresh romantic comedy that for fans of Julia Quinn and Evie Dunmore.

To Marry and to Meddle

The Happy Ever After Playlist

Love in Color: Mythical Tales from Around the World, Retold

The League of Gentlewomen Witches

Echoes Among the Stones

You Deserve Each Other

It Had to Be You

Twice in a Blue Moon

How to Fake It in Hollywood

The Storied Life of A. J. Fikry

Circling Back to You

Bringing Down the Duke

The House of Mirth

To Love and to Loathe: A Novelvolume 2

Diary of an Oxygen Thief

The Viscount Who Loved Me [Tv Tie-In]: Bridgerton

The Girl on the Train

A Lady's Guide to Mischief and Mayhem

A Lady's Formula for Love

Nine Rules to Break When Romancing a Rake

On a Night of a Thousand Stars

How to Fail at Flirting

Sabine's Notebook: In Which the Extraordinary Correspondence of Griffin & Sabine Continues