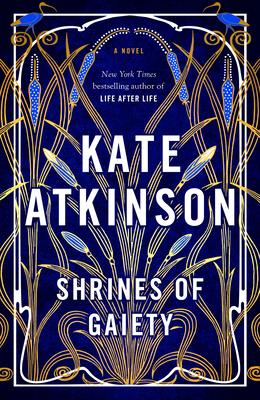 NEW YORK TIMES BESTSELLER - The award-winning author of Life after Life transports us to a restless London in the wake of the Great War--a city bursting with money, glamour, and corruption--in this spellbinding tale of seduction and betrayal. A BEST BOOK OF THE YEAR: WASHINGTON POST, TIME, THE GUARDIAN, BOOKLIST [Shrines of Gaiety] is set during Jazz Age London, in all its fizzy madness and desperation for the new, the better, the hustle. Atkinson simply has a magician's ability to switch readers' moods within a few paragraphs, and as dark as her stories can get, within them always shines a beacon of humanity. -Gillian Flynn, bestselling author of Dark Places 1926, and in a country still recovering from the Great War, London has become the focus for a delirious new nightlife. In the clubs of Soho, peers of the realm rub shoulders with starlets, foreign dignitaries with gangsters, and girls sell dances for a shilling a time. The notorious queen of this glittering world is Nellie Coker, ruthless but also ambitious to advance her six children, including the enigmatic eldest, Niven, whose character has been forged in the crucible of the Somme. But success breeds enemies, and Nellie's empire faces threats from without and within. For beneath the dazzle of Soho's gaiety, there is a dark underbelly, a world in which it is all too easy to become lost. With her unique Dickensian flair, Kate Atkinson gives us a window in a vanished world. Slyly funny, brilliantly observant, and ingeniously plotted, Shrines of Gaiety showcases the myriad talents that have made Atkinson one of the most lauded writers of our time.

Behind the Scenes at the Museum (Twenty-Fifth Anniversary Edition)

Behind the Scenes at the Museum Lib/E

Behind the Scenes at the Museum