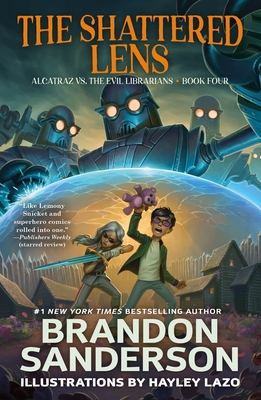 The Shattered Lens: Alcatraz vs. the Evil Librarians

It's good to be the king! So, remember how I told you that the evil Librarians who control your world are trying to take over all the countries they don't let you know about--the Free Kingdoms? In the last book (you've read the first three, right?) I, Alcatraz Smedry, foiled a plot that would have seen the rulers of those countries giving up the kingdom of Mokia for the promise of a cease-fire (which the Librarians totally would have broken in a few years). That means the battle for Mokia continues, and it's up to me to somehow keep the Librarians from conquering it. That's going to be super hard, because they have a ton of soldiers and even giant robots, and their powerful weapons knock people unconscious. With the royal family of Mokia all in comas, suddenly that makes me acting king! All I have to fight back are some teddy bears and my talent for breaking stuff. Plus the dubious contributions of my cousin Kaz, who gets lost all the time, and my cousin Aydee who is terrible at math. (We're doomed.) At least Bastille will always be there to get me out of trouble, right? Is my first day as king bound to be the last day of my life? The Shattered Lens is the fourth book in this action-packed fantasy series for young readers.

The Shattered Lens: Alcatraz vs. the Evil Librarians

The Gathering Storm: Book Twelve of the Wheel of Time

Alcatraz vs. the Evil Librarians

Bastille vs. the Evil Librarians

The Gathering Storm: Book Twelve of the Wheel of Time

Alcatraz vs. the Evil Librarians

The Scrivener's Bones: Alcatraz vs. the Evil Librarians

The Knights of Crystallia: Alcatraz vs. the Evil Librarians

Legion: The Many Lives of Stephen Leeds

The Dark Talent: Alcatraz vs. the Evil Librarians

The Bands of Mourning: A Mistborn Novel

The Alloy of Law: A Mistborn Novel

Shadows of Self: A Mistborn Novel

Alcatraz Versus the Knights of Crystallia [Dramatized Adaptation]

The Hope of Elantris [Dramatized Adaptation]

What We'll Build: Plans for Our Together Future

Boynton's Greatest Hits the Big Green Box: Happy Hippo, Angry Duck; But Not the Armadillo; Dinosaur Dance!; Are You a Cow?

Everything Will Be Ok

Max and the Midknights: The Tower of Time

Realm of the Blue Mist: A Graphic Novel (the Rema Chronicles #1)

I Am Every Good Thing

Lou: A Children's Picture Book about a Fire Hydrant and Unlikely Neighborhood Hero

Skin of the Sea

Noodle and the No Bones Day

In the Beautiful Country

I Want to Be a Vase

Little Witch Hazel: A Year in the Forest

Zachary Ying and the Dragon Emperor

Kerry and the Knight of the Forest: (A Graphic Novel)

Star Wars Build Your Own: X-Wing

The Last Kids on Earth

Escape from the Nether! (Minecraft)

Just Roll with It: (A Graphic Novel)

Papá, Por Favor, Bájame La Luna (Papa, Please Get the Moon for Me)

The Napping House Board Book

The Dangerous Gift (Wings of Fire #14)

Mapmakers and the Lost Magic: (A Graphic Novel)

The Best Eid Ever

This Is My Rock

The Book of Mythical Beasts and Magical Creatures

The Okay Witch and the Hungry Shadow: Volume 2

Lightfall: Shadow of the Bird

Star Wars: The Secrets of the Jedi

Who Will You Be?

No Matter What Padded Board Book

Frog and Toad Together

Other Words for Home

The Troubled Girls of Dragomir Academy

Harry Potter and the Chamber of Secrets: The Illustrated Edition (Illustrated): Volume 2

The Color Monster: A Story about Emotions

The Montague Twins: The Witch's Hand

The Thank You Book

The Legend of Brightblade

Once Upon Another Time

In the Forest (Touch and Feel Surprises)

The Queen of Kindergarten

Harry Potter and the Order of the Phoenix: Volume 5

The First Rule of Climate Club

Olympians: Zeus: King of the Gods

Unicorn and Friends Search and Find

The Lady from Philadelphia: The Peterkin Papers

Harry Potter and the Chamber of Secrets: Volume 2

The Last Kids on Earth and the Skeleton Road

Freddie vs. the Family Curse

The First Blade of Sweetgrass

The Midwinter Witch: A Graphic Novel (the Witch Boy Trilogy #3)

Scout Is Not a Band Kid: (A Graphic Novel)

Everything Is Awesome: A Search-And-Find Celebration of Lego History (Lego)