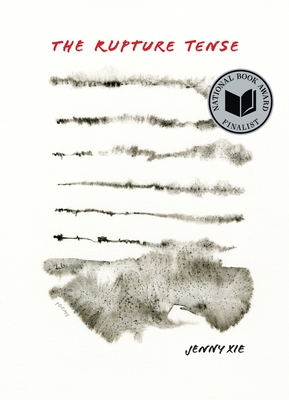 The astounding second collection by Jenny Xie, a magician of perspective and scale (The New Yorker)

Shaped around moments of puncture and release, The Rupture Tense registers what leaks across the breached borders between past and future, background and foreground, silence and utterance. In polyphonic and formally restless sequences, Jenny Xie cracks open reverberant, vexed experiences of diasporic homecoming, intergenerational memory transfer, state-enforced amnesia, public secrecies, and the psychic fallout of the Chinese Cultural Revolution. Across these poems, memory--historical, collective, personal--stains and erodes. Xie voices what remains irreducible in our complex entanglements with familial ties, language, capitalism, and the histories in which we find ourselves lodged. The Rupture Tense begins with poems provoked by the photography of Li Zhensheng, whose negatives, hidden under his floorboards to avoid government seizure, provide one of the few surviving visual archives of the Chinese Cultural Revolution, and concludes with an aching elegy for the poet's grandmother, who took her own life shortly after the end of the Revolution. This extraordinary collection records the aftershocks and long distances between those years and the present, echoing out toward the ongoing past and a trembling future.

The Rain in the Trees

The Song of Hiawatha

The Selected Poems of William Blake

Until the Kingdom Comes

A Treasury of Iqbal

Advice from 1 Disciple of Marx to 1 Heidegger Fanatic

The Palm at the End of the Mind: Selected Poems and a Play

Music for Landing Planes by: Poems

The Panther & the Lash

Just for a Moment

Letters to a Young Poet / The Possibility of Being

The Poems and Prose of Mary, Lady Chudleigh

something sweet & filled with blood

The Shadow of Sirius

The Magnitude of My Sublime Existence

The Heart Is Strange

A Pound of Steam

I Wish I Had a Heart Like Yours, Walt Whitman

What Burden Do Those Trains Bear Away: A Memoir in Poems

The Wind Blows, the Ice Breaks: Poems of Loss and Renewal by Minnesota Poets

Blood of the Sun: Poems

Green Is for World

The Sonnets: Poems of Love

Loving a Woman in Two Worlds

Earth in Anger: Twenty-Five Poems of Love and Despair for Planet Earth

The Gathering of My Name

Lend a Hand: Poems about Giving

Christian Poetry in America Since 1940: An Anthology