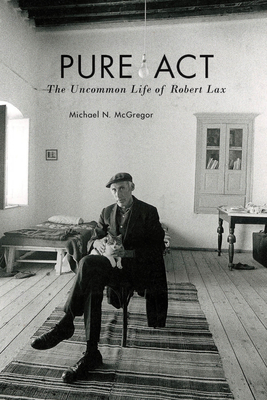 Pure Act tells the story of poet Robert Lax, whose quest to live a true life as both an artist and a spiritual seeker inspired Thomas Merton, Jack Kerouac, William Maxwell and a host of other writers, artists and ordinary people. Known in the U.S. primarily as Merton's best friend and in Europe as a daringly original avant-garde poet, Lax left behind a promising New York writing career to travel with a circus, live among immigrants in post-war Marseilles and settle on a series of remote Greek islands where he learned and recorded the simple wisdom of the local people. Born a Jew, he became a Catholic and found the authentic community he sought in Greek Orthodox fishermen and sponge divers. In his early life, as he alternated working at The New Yorker, writing screenplays in Hollywood and editing a Paris literary journal with studying philosophy, serving the poor in Harlem and living in a sanctuary high in the French Alps, Lax pursued an approach to life he called pure act―a way of living in the moment that was both spontaneous and practiced, God-inspired and self-chosen. By devoting himself to simplicity, poverty and prayer, he expanded his capacity for peace, joy and love while producing distinctive poetry of such stark beauty critics called him one of America's greatest experimental poets and one of the new 'saints' of the avant-garde. Written by a writer who met Lax in Greece when he was a young seeker himself and visited him regularly over fifteen years, Pure Act is an intimate look at an extraordinary but little-known life. Much more than just a biography, it's a tale of adventure, an exploration of friendship, an anthology of wisdom, and a testament to the liberating power of living an uncommon life.

33 Days to Morning Glory: A Do-It- Yourself Retreat in Preparation for Marian Consecration

A Holy and Living Sacrifice

St. Joseph First Communion Catechism (No. 0): Prepared from the Official Revised Edition of the Baltimore Catechism

Behold: A Guided Advent Journal for Prayer and Meditation

Catechism of the Catholic Church

The Divine Mercy Message and Devotion: With Selected Prayers from the Diary of St. Maria Faustina Kowalska

Liturgy of the Hours Inserts

No Turning Back: A Witness to Mercy, 10th Anniversary Edition

The Old Testament: Our Call to Faith and Justice

The Way of the Cross for Children

Cry of the Heart: On the Meaning of Suffering

Liturgy of the Hours

The World of Marian Apparitions: Mary's Appearances and Messages from Fatima to Today

Franciscan Lectio: Reading the World Through the Living Word

Novena to Mary, Untier of Knots

Consoling the Heart of Jesus: A Do-It-Yourself Retreat

Food for the Soul: Reflections on the Mass Readings (Cycle C)

The Imitation of Christ: In Four Books

After Suicide: There's Hope for Them and for You

The Warning: Testimonies and Prophecies of the Illumination of Conscience

Catholicism: A Global History from the French Revolution to Pope Francis

The Glories of Heaven: The Supernatural Gifts That Await Body and Soul in Paradise

Handbook of Indulgences: Norms and Grants

Daily Meditations with the Holy Spirit: Minute Meditations for Every Day Containing a Scripture, Reading, a Reflection, and a Prayer

Living Liturgy(tm): Spirituality, Celebration, and Catechesis for Sundays and Solemnities, Year a (2023)

The Imitation of Christ: Thomas A. Kempis

Jesus, Companion in My Suffering: Reflections for the Lenten Journey

The Case for Catholicism: Answers to Classic and Contemporary Protestant Objections

All One in Christ: A Catholic Critique of Racism and Critical Race Theory

The Divine Project: Reflections on Creation and the Church

Day by Day with St. Francis

Biblical Walk Through the Mass (Revised)

The Miracle of Hospitality

Encountering Jesus in the New Testament

Day by Day for the Holy Souls in Purgatory: 365 Reflections

His Angels at Our Side

The Catholic Mass: Steps to Restoring God to the Center of Liturgy

Pastoral Care of the Sick: Rites of Anointing and Viaticum

From the White House to the White Cross: Confessions of a TV News Correspondent

The Great Story of Israel: Understanding the Old Testament (Vol I)

Why We're Catholic: Our Reason

Miracle Hour: A Method of Prayer That Will Change Your Life

The Bible in a Year Notebook: 2nd Edition

Padre Pio: Stories and Memories of My Mentor and Friend

The Secret of the Bethlehem Shepherds

Light of the Saints

The Secret of the Holy Face: The Devotion Destined to Save Society

My Daily Bread: A Summary of the Spiritual Life: Simplified and Arranged for Daily Reading, Reflection and Prayer

Pocket Guide to the Sacrament of Reconciliation

Imitation of Mary: In Four Books

Stations of the Cross

The Power of Silence: Against the Dictatorship of Noise

Jordan Peterson, God, and Christianity: The Search for a Meaningful Life

Unruly Saint: Dorothy Day's Radical Vision and Its Challenge for Our Times

Pocket Guide to the Rosary

My Imitation of Christ

The Devil in the Castle: St. Teresa of Avila, Spiritual Warfare, and the Progress of the Soul

Pastoral Care of the Sick

A Gift of Joy and Hope

Be Restored: Healing Our Sexual Wounds Through Jesus' Merciful Love

Hiking the Camino: 500 Miles with Jesus

The Story of Saint Valentine: A Story of Courageous Love

Every Day Is a Gift: Minute Meditations for Every Day Taken from the Holy Bible and the Writings of the Saints

The Apostolic Constitution Preach the Gospel (Praedicate Evangelium): With an Appraisal of Francis's Reform of the Roman Curia by Massimo Faggioli

Jesus and the Jewish Roots of Mary: Unveiling the Mother of the Messiah

Journey of Our Love

The Moral Wisdom of the Catholic Church: A Defense of Her Controversial Moral Teachings

The Bishop of the Abandoned Tabernacle: Saint Manuel Gonzalez Garcia

Three Minutes with God: Reflections to Inspire, Encourage, and Motivate

The Good, the Messy and the Beautiful: The Joys and Struggles of Real Married Life

Made for Love: Same-Sex Attraction and the Catholic Church

The Gospel of John

Pray for Us: 75 Saints Who Sinned, Suffered, and Struggled on Their Way to Holiness

Going to Confession: How to Make a Good Confession

The Ignatian Adventure: Experiencing the Spiritual Exercises of Saint Ignatius in Daily Life

Faith of Our Fathers: A History of True England

Sundays on the Go: 90 Seconds with the Weekly Gospel (Year A)

Reimagining the Ignatian Examen: Fresh Ways to Pray from Your Day

Jesus and the Jewish Roots of the Eucharist: Unlocking the Secrets of the Last Supper

St. Joseph Daily Prayer Book: Prayers, Readings, and Devotions for the Year Including, Morning and Evening Prayers from Liturgy of the Hours

The Return of the Prodigal Son: A Story of Homecoming

Nazis of Copley Square: The Forgotten Story of the Christian Front

Saint John of the Cross: Master of Contemplation

What Does God Want?

To Sanctify the World: The Vital Legacy of Vatican II

Consecration to St. Joseph for Children and Families

I Loved Jesus in the Night: Teresa of Calcutta--A Secret Revealed