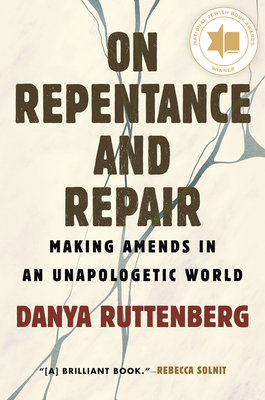 A crucial new lens on repentance, atonement, forgiveness, and repair from harm--from personal transgressions to our culture's most painful and unresolved issues American culture focuses on letting go of grudges and redemption narratives instead of the perpetrator's obligations or recompense for harmed parties. As survivor communities have pointed out, these emphases have too often only caused more harm. But Danya Ruttenberg knew there was a better model, rooted in the work of the medieval philosopher Maimonides. For Maimonides, upon whose work Ruttenberg elaborates, forgiveness is much less important than the repair work to which the person who caused harm is obligated. The word traditionally translated as repentance really means something more like return, and in this book, returning is a restoration, as much as is possible, to the victim, and, for the perpetrator of harm, a coming back, in humility and intentionality, to behaving as the person we might like to believe we are. Maimonides laid out five steps: naming and owning harm; starting to change/transformation; restitution and accepting consequences; apology; and making different choices. Applying this lens to both our personal relationships and some of the most significant and painful issues of our day, including systemic racism and the legacy of enslavement, sexual violence and harassment in the wake of #MeToo, and Native American land rights, On Repentance and Repair helps us envision a way forward. Rooted in traditional Jewish concepts while doggedly accessible and available to people from any, or no, religious background, On Repentance and Repair is a book for anyone who cares about creating a country and culture that is more whole than the one in which we live, and for anyone who has been hurt or who is struggling to take responsibility for their mistakes.

Yentl's Revenge: The Next Wave of Jewish Feminism

The Temple in Early Christianity: Experiencing the Sacred

The Real Name of God: Embracing the Full Essence of the Divine

The Return of the Gods

The Passover Haggadah: An Ancient Story for Modern Times

Deliverance From Demonic Covenants And Curses

The God of the Way: A Journey Into the Stories, People, and Faith That Changed the World Forever

The New American Haggadah: A Simple Passover Seder for the Whole Family

The Newish Jewish Encyclopedia: From Abraham to Zabar's and Everything in Between

The Illustrated Pirkei Avot: A Graphic Novel of Jewish Ethics

Rose Guide to the Temple

Night of Beginnings: A Passover Haggadah

Awestruck by Glory: True-life Thriller. An archaeologist is attacked by an invisible force. Then she makes a breathtaking discovery.

The Practical Tanya - Part One - The Book for Inbetweeners

The Dead Sea Scrolls and the Christian Myth

The Seder: A Short, Sweet and Complete Passover Haggadah

Judaism's Life-Changing Ideas: A Weekly Reading of the Jewish Bible

This Is Real and You Are Completely Unprepared: The Days of Awe as a Journey of Transformation

The Book of Enoch: From-The Apocrypha and Pseudepigrapha of the Old Testament

Mudhouse Sabbath: An Invitation to a Life of Spiritual Discipline

A Concise Hebrew and Aramaic Lexicon of the Old Testament

Have a Little Faith: A True Story

A Guide to the Guide

Looking for an Enemy: 8 Essays on Antisemitism

777 & Other Qabalistic Writings of Aleister Crowley

Sefer Yetzirah: The Book of Creation

The Haggadah: Pathways to Pesach and the Haggadah

My Grandfather's Blessings: Stories of Strength, Refuge, and Belonging

Tanakh-TK: The Holy Scriptures, the New JPS Translation According to the Traditional Hebrew Text

Professor of Apocalypse: The Many Lives of Jacob Taubes

The Book of Proverbs: A Social Justice Commentary

The Promise of the Land: A Passover Haggadah

The Book of Jasher

Come and Hear: What I Saw in My Seven-And-A-Half-Year Journey Through the Talmud

Honoring Tradition, Embracing Modernity: A Reader for the Union for Reform Judaism's Introduction to Judaism Course

Reading Moses, Seeing Jesus: How the Torah Fulfills Its Goal in Yeshua

Twelve Tribes: Promise and Peril in the New Israel

The Sacred Bridge: Carta's Atlas of the Biblical World

Passover Haggadah: A New English Translation and Instructions for the Seder

Love Peace and Pursue It: Developing Respect, Compassion, and Connection in Our Relationships from a Torah Perspective

The Book of Revolutions: The Battles of Priests, Prophets, and Kings That Birthed the Torah

The Magna Carta of Humanity: Sinai's Revolutionary Faith and the Future of Freedom

The Books of Enoch: Complete edition: Including (1) The Ethiopian Book of Enoch, (2) The Slavonic Secrets and (3) The Hebrew Book of Enoch

The Murders of Moisés Ville: The Rise and Fall of the Jerusalem of South America

The Essential Seder: A Contemporary Haggadah

Let Us All Breathe Together: Prose, Poems, Practices

The Jewish World of Alexander Hamilton

Songs of the Heart: A Contemporary Translation with Meaningful Insights

Here All Along: Finding Meaning, Spirituality, and a Deeper Connection to Life--In Judaism (After Finally Choosing to Look There)

Judaism Without Tribalism: A Guide to Being a Blessing to All the Peoples of the Earth

The Science of the Kabbalah

The Guide for the Perplexed

Studies in Halakhah and Rabbinic History

The Practical Tanya - Part Two - Gateway to Unity and Faith

Thunder in the Soul: To Be Known by God

The Book of Job

The Prophets: Two Volumes in One

The Apocrypha: Translated Out of the Original Tongues

Aligning With God's Appointed Times: Discover the Prophetic and Spiritual Meaning of the Biblical Holidays

Sitting at the Feet of Rabbi Jesus: How the Jewishness of Jesus Can Transform Your Faith

The Bible with and Without Jesus: How Jews and Christians Read the Same Stories Differently

Sefer Yetzirah: The Book of Formation

To Be a Jew: A Guide to Jewish Observance in Contemporary Life

Israel and the Church: An Israeli Examines God's Unfolding Plans for His Chosen Peoples

The Way: Using the Wisdom of Kabbalah for Spiritual Transformation and Fulfillment

The Books of Enoch, Jubilees, And Jasher [Deluxe Edition]

Filled with Fire and Light: Portraits and Legends from the Bible, Talmud, and Hasidic World

There Is No Place Without You: poems

The Power of Ideas: Words of Faith and Wisdom

The Chicken Qabalah of Rabbi Lamed Ben Clifford: Dilettante's Guide to What You Do and Do Not Know to Become a Qabalist

The Essene Gospel of Peace: The Complete 4 Books in One Volume

Torah in a Time of Plague: Historical and Contemporary Jewish Responses

Malkah's Notebook: A Journey Into the Mystical Aleph-Bet

The Sacred Art of Lovingkindness: Preparing to Practice

My Haggadah Journal: A Guided Journey to Heal, Grow, and Thrive

God in Search of Man: A Philosophy of Judaism

Separation and Its Discontents: Toward an Evolutionary Theory of Anti-Semitism

The International Jew Vol I: The World's Foremost Problem

The Beast That Crouches at the Door

Kabbalah, Magic & the Great Work of Self Transformation: A Complete Course

The Nazi Officer's Wife: How One Jewish Woman Survived the Holocaust

A People That Shall Dwell Alone: Judaism as a Group Evolutionary Strategy, with Diaspora Peoples

The Essential Kabbalah: The Heart of Jewish Mysticism