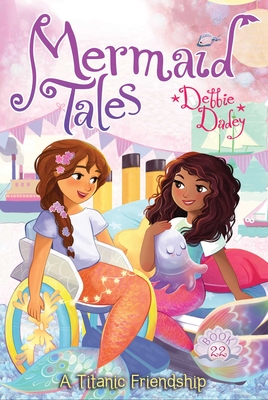 Echo struggles to share her friends with a new student in this twenty-second Mermaid Tales adventure. Echo has always been fascinated by human inventions, so she's especially interested when her class studies the history of the Titanic and the bacteria discovered there, Halomonas titanicae. When Mrs. Karp announces that the class will be going on an ocean trip to the sunken vessel, Echo is thrilled to have a chance to see it, since the ship is decaying and won't be around much longer. The ocean trip isn't the only big news at school--a new merstudent, Anita, will be joining the class! But Echo and Anita immediately don't get along. Anita is rude to Echo the first time they meet, and all of Echo's friends seem to like Anita better than her. As the trip approaches, the merfriends learn that the Titanic site isn't wheelchair accessible, meaning Anita won't be able to join the class. Her friends decide to boycott the trip, but Echo has been looking forward to it for weeks. Is Echo willing to look past her jealousy and give up the trip? Or can she find way for everyone to be included in both the ocean trip and her friend group?

Sleepover at the Haunted Museum, 21

Sleepover at the Haunted Museum: Volume 21

The Crook and the Crown: Book 13

Mermaid Tales Sea-Tacular Collection Books 1-10: Trouble at Trident Academy; Battle of the Best Friends; A Whale of a Tale; Danger in the Deep Blue Se

Never Give Up: Dr. Kati Karikó and the Race for the Future of Vaccines

Here and Now Padded Board Book

Little Witch Hazel: A Year in the Forest

How Do You Dance?

Haylee and Comet: A Trip Around the Sun

Last Gate of the Emperor

Claudia and the New Girl: A Graphic Novel (the Baby-Sitters Club #9): Volume 9

I Want to Be a Vase

I Love You, Elephant!

Aster and the Accidental Magic: (A Graphic Novel)

A Map Into the World

The First Blade of Sweetgrass

The Night of Wishes: Or the Satanarchaeolidealcohellish Notion Potion

I Believe I Can

The Little Engine That Could: Loren Long Edition

Nancy Drew 01: The Secret of the Old Clock

Julián Is a Mermaid

I Am Every Good Thing

Harry Potter and the Chamber of Secrets: The Illustrated Edition (Illustrated): Volume 2

The Okay Witch and the Hungry Shadow: Volume 2

I'm Not Scared, You're Scared

Let's Do Everything and Nothing

Katy and the Big Snow

The View from the Very Best House in Town

Mystery of the Moss-Covered Mansion

Lightfall: Shadow of the Bird

The Hidden Witch: A Graphic Novel (the Witch Boy Trilogy #2)

Kerry and the Knight of the Forest: (A Graphic Novel)

My New Friend Is So Fun!

In the Night Kitchen

Carrimebac, the Town That Walked

A Tear in the Ocean

The Troubled Girls of Dragomir Academy

Besties: Work It Out

What Color Is My Hijab?

WINNIE THE POOH AND TIGGER TOO

The Last Kids on Earth and the Doomsday Race

Heroes of Olympus, The, Book Five the Blood of Olympus ((New Cover))

Pahua and the Soul Stealer

A Wrinkle in Time

Dawn and the Impossible Three: A Graphic Novel (the Baby-Sitters Club #5): Full-Color Editionvolume 5