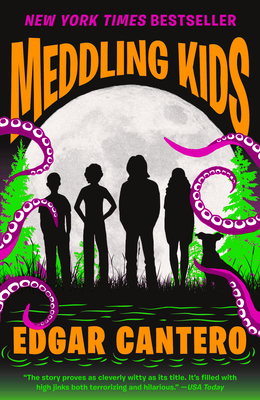 NEW YORK TIMES BESTSELLER The story proves as cleverly witty as its title. It's filled with high jinks both terrorizing and hilarious. --USA Today

In 1977, four teenagers and a dog--Andy (the tomboy), Nate (the nerd), Kerri (the bookworm), Peter (the jock), and Tim (the Weimaraner)--solved the mystery of Sleepy Lake. The trail of an amphibian monster terrorizing the quiet town of Blyton Hills leads the gang to spend a night in Deboën Mansion and apprehend a familiar culprit: a bitter old man in a mask. Now, in 1990, the twenty-something former teen detectives are lost souls. Plagued by night terrors and Peter's tragic death, the three survivors have been running from their demons. When the man they apprehended all those years ago makes parole, Andy tracks him down to confirm what she's always known--they got the wrong guy. Now she'll need to get the gang back together and return to Blyton Hills to find out what really happened in 1977, and this time, she's sure they're not looking for another man in a mask. A mad scientist's concoction of H. P. Lovecraft, teen detectives, and a love of Americana, Edgar Cantero's Meddling Kids is a story filled with rich horror, thrilling twists, outright hilarity, and surprising poignancy.

The Shop on Royal Street

A Lullaby for Witches

Ramses the Damned: The Reign of Osiris

The Lake of the Dead (Valancourt International)

Such a Pretty Smile

Our Lady of Mysterious Ailments

The Dark Tower II: The Drawing of the Three Volume 2

Perfume: The Story of a Murderer

The Book of Souls