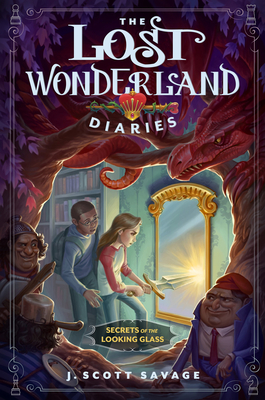 After returning from Wonderland, Celia and Tyrus journey to the Looking-Glass World to reclaim their mirror images and stop a war between two powerful queens. When a dark creature called the Bandersnatch steals Lewis Carroll's lost diaries, Celia and Tyrus try to get it back but are tricked into passing through a magic mirror into the Looking-Glass World, a place where everything--themselves included--are divided in two, like identical twins. Celia's astute logic and Tyrus's exceptional imagination now belong to their mirror images, Lia and Ty, who are generals in the Red Queen's Army, which is at war against the White Kingdom. Left without their greatest problem-solving skills, Celia and Tyrus must rely on each other more than ever as they play a massive game of chess to try to catch their mirror images, who always seem to be one step ahead of them. Along the way, they engage in a rhyming battle with Tweedle Dee and Tweedle Dum, seek advice from Humpty and Dumpty, and learn how to believe in the impossible from the White Queen, who remembers the future as if it were the past. As the final battle draws near, Celia and Tyrus form an uneasy alliance with Lia and Ty in order to find the legendary vorpal sword--the only weapon powerful enough to stop the war. If they fail, not only will two kingdoms be destroyed, but Celia and Tyrus might never regain their stolen talents and be trapped in the Looking-Glass World forever.

Graysen Foxx and the Treasure of Principal Redbeard

This Is My Rock

Busy Windows ON THE FARM

A Day in the Zoo: A Reproduction of an Antique Pop-Up Book

WHEN DID YOU SEE HER LAST?

The Lady from Philadelphia: The Peterkin Papers

The Giraffe and the Pelly and Me

A Traveller in Time

The Very Persistent Gappers of Frip

The Hidden Oracle (The Trials of Apollo, Book 1)

Peef and His Best Friend

The Pigeon Will Ride the Roller Coaster!

The Pigeon Has to Go to School!

WINNIE THE POOH AND TIGGER TOO

We Don't Eat Our Classmates: A Penelope Rex Book

Spaghetti in a Hot Dog Bun: Having the Courage to Be Who You Are

THE TALE OF TWO BAD MICE

LOOK OUT KINDERGARTEN, HERE I COME!

The Velveteen Rabbit: Or How Toys Become Real

Time for School, Little Blue Truck: A Back to School Book for Kids

My Mouth Is a Volcano

Stuntboy, in the Meantime