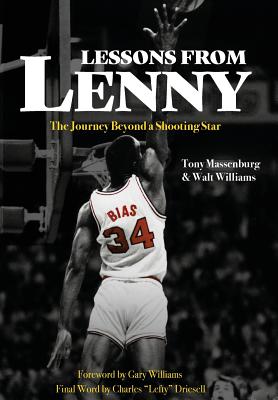 June 17, 1986: Len Bias, the best college basketball player in the country, achieves his dream and is drafted by the NBA Champion Boston Celtics. Less than forty-eight hours later, he dies.

It's the end of innocence at the University of Maryland, and it's The Beginning.

The shocking death of a superstar is national news and unleashes a tidal wave of coverage, condemnation and legislation so punitive that some have called it a great stain on the American justice system.

Legendary coach Lefty Driesell leaves, his replacement, Bob Wade is forced out under a cloud, and alumnus Gary Williams is hired to resurrect Maryland Basketball. The student-athletes who stay must deal with the crippling grief of losing an icon and a friend while struggling with public contempt, criminal investigations, NCAA sanctions--a seemingly endless nightmare for these young men who fight to keep playing, trying to return Maryland to greatness.

LESSONS FROM LENNY, an inspiring story of survival, rebirth and the constant search for a better self is told by two of these young men.

In 1986, Tony Massenburg is a freshman teammate of Bias. He came from Stony Creek, Virginia to learn to play like Len and the death of his idol shook him to his core.

In Temple Hills, Maryland, sixteen-year-old Walt Williams can't stop crying, his dream of following Len's footsteps to Maryland torn away in an instant. Losing the hometown hero crushed the hope from his teenage world.

To ball players, Len Bias was The Man, a shining symbol of achievement, a teacher of the game at the highest level and the model of the life they wanted to live.

The nation saw Len Bias' death as a moral failure and all of Maryland as guilty by association. But Tony and Walt focused on the gifts in the lessons from Len's life, and that hard-won education molded them into pillars of support in Maryland's revival, courageous and unrelenting professionals in the NBA, and outstanding examples of triumph over tragedy.

Off Center: A Memoir of Addiction, Recovery, and Redemption in Professional Football