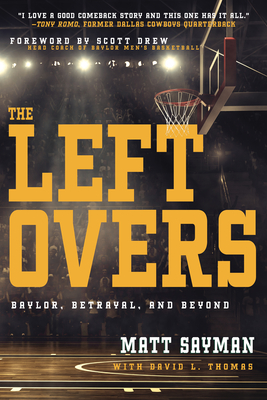 As a young boy, Matt Sayman dreamed of playing pro basketball. His family believed in his vision, even agreeing to move to Texas when one of Matt's favorite coaches left Pennsylvania for the Lone Star State. Matt eventually received a full athletic scholarship from Baylor University. He was only six-feet-four but what he lacked in height, he made up for in skill and positive attitude. Then the summer before his senior year, the bottom fell out of Matt's world. A player went missing...and was found dead. A teammate was the murder suspect. A coach was accused of paying players under the table. Some players had received drug-free urine samples to pass off as their own. And through it all, Matt was supposed to be the glue who held the Baylor basketball team together. In The Leftovers: Baylor, Betrayal, and Beyond, Matt shares his personal story of dealing with the fallout after tragedy and trouble nearly sank Baylor's program. Matt was senior co-captain, but with a short-manned team of leftover players, there was no way to have a winning season, no way some talent scout would take a chance on him. Matt's hope and faith were shaken because of the scandals that summer. His post-Baylor years included a DWI, a difficult divorce, and broken relationships. Matt struggled to find peace. On his thirtieth birthday, just a few days after a deep conversation with his pastor, Matt said goodbye to alcohol and surrendered his life to God. This book tells the story of Matt's personal redemption--but it is also a story of the redemption of Baylor University's men's basketball program. Matt's team with a young new head coach forged the Baylor team that won the 2021 NCAA men's basketball championship.

Jesus Wants to Save Christians: A Manifesto for the Church in Exile

On This Spirit Walk: The Voices of Native American and Indigenous Peoples

To Heaven and Back: A Doctor's Extraordinary Account of Her Death, Heaven, Angels, and Life Again: A True Story

The Problem of Pain

The Story of You: An Enneagram Journey to Becoming Your True Self

What We Wish Were True: Reflections on Nurturing Life and Facing Death

Walking in Wonder: Eternal Wisdom for a Modern World

You Got This: 90 Devotions to Equip and Empower Hardworking Women

A Gospel Primer for Christians: Learning to See the Glories of God's Love

Let Your Life Speak: Listening for the Voice of Vocation

Girl, Stop Apologizing: A Shame-Free Plan for Embracing and Achieving Your Goals

The Prayer That Turns the World Upside Down: The Lord's Prayer as a Manifesto for Revolution

Boundaries: When to Say Yes, How to Say No, to Take Control of Your Life

The Spiritual Exercises of St. Ignatius

The Shattering of Loneliness: On Christian Remembrance

Why Do Catholics Do That?: A Guide to the Teachings and Practices of the Catholic Church

Life of the Beloved: Spiritual Living in a Secular World

The Boy Who Came Back from Heaven: A Remarkable Account of Miracles, Angels, and Life Beyond This World

Breathing Under Water: Spirituality and the Twelve Steps

Forgotten God: Reversing Our Tragic Neglect of the Holy Spirit

Love and Respect Workbook: The Love She Most Desires; The Respect He Desperately Needs

From Pride to Humility: A Biblical Perspective

Faith After Doubt: Why Your Beliefs Stopped Working and What to Do about It

100 Days to Brave: Devotions for Unlocking Your Most Courageous Self

Eve in Exile and the Restoration of Femininity

It's Good to Be a Man: A Handbook for Godly Masculinity

The Excellent Wife: A Biblical Perspective

Good Enough: 40ish Devotionals for a Life of Imperfection

A More Excellent Way: Be in Health [With DVD]

The Exemplary Husband: A Biblical Perspective

Novena to Mary, Untier of Knots

It's Good to Be a Man: A Handbook for Godly Masculinity

Communion of the Sick: Approved Rites for Use in the United States of America Excerpted from Pastoral Care of the Sick and Dying in English a

The Pursuit of God: Updated Edition with Study Guide

Exposing the Spiritual Roots of Disease: Powerful Answers to Your Questions about Healing and Disease Prevention

The Intentional Father: A Practical Guide to Raise Sons of Courage and Character

Find Your People: Building Deep Community in a Lonely World

All Creation Waits: The Advent Mystery of New Beginnings

The Case for Heaven: A Journalist Investigates Evidence for Life After Death

Shatterproof: What Held Me Together When My World Fell Apart

Mysteries of the Messiah: Unveiling Divine Connections from Genesis to Today

The Case for Christ: A Journalist's Personal Investigation of the Evidence for Jesus

Radically Apostolic: The Reality, the Journey, and the Reward of the Call of God!

Mysteries of the Anointing

Too Nice For Sales: A Practical Guide to Ethical Lead Conversion

The Privilege of Being a Woman

Spiritual Excellence: The Path to Happiness, Holiness, and Heaven

Say My Name: The Third Commandment: It's Probably Not What You Think!

I Will See You in Heaven (Dog Lover's Edition)

From Me to We: A Premarital Guide for the Bride- And Groom-To-Be

You Were Always There: Notes and Recipes for Living a Life You Love

Perfectly Suited: The Armor of God for the Anxious Mind

Becoming a Person of Influence: How to Positively Impact the Lives of Others

Boundaries Updated and Expanded Edition: When to Say Yes, How to Say No to Take Control of Your Life

100 Bible Verses That Made America: Defining Moments That Shaped Our Enduring Foundation of Faith

The Imitation of Christ: In Four Books

Finding Hope: A Story of Tragedy, Triumph and Redemption

Becoming a Woman Whose God Is Enough

Glue: A Leadership Development Strategy to Bond and Unite

M Is for Mama: A Rebellion Against Mediocre Motherhood

Love Worth Finding (Pack of 25)

The Purpose Driven Life: What on Earth Am I Here For?

Waymaker: Finding the Way to the Life You've Always Dreamed of

Forgiveness: The Freedom to Let Go

Grace Can Lead Us Home: A Christian Call to End Homelessness

Kingdom Thinking: An Invitation To Think And Live The Kingdom Way

Bring Your Hammer: 28 Tools Dads Can Grab From the Book of Nehemiah

Fount of Heaven: Prayers of the Early Church

The Christmas Promise Storybook: A True Story from the Bible about God's Forever King

Say All the Unspoken Things: A Book of Letters

My Utmost for His Highest: Updated Language Paperback

The Glory of Christ

Daily Companion for Peace of Heart

After the Revolution: Sex and the Single Evangelical

Don't Give the Enemy a Seat at Your Table: It's Time to Win the Battle of Your Mind...

Heaven, an Unexpected Journey: One Man's Experience with Heaven, Angels, and the Afterlife

Who Are You Following?: Pursuing Jesus in a Social-Media Obsessed World

Comfort for the Grieving Spouse's Heart: Hope and Healing After Losing Your Partner

Everything Happens for a Reason: And Other Lies I've Loved

Keeping Hope Alive: Devotions for Strength in the Storm

Get Out of Your Head: Stopping the Spiral of Toxic Thoughts

My Reading Life: A Book Journal

Forgiving What You Can't Forget: Discover How to Move On, Make Peace with Painful Memories, and Create a Life That's Beautiful Again