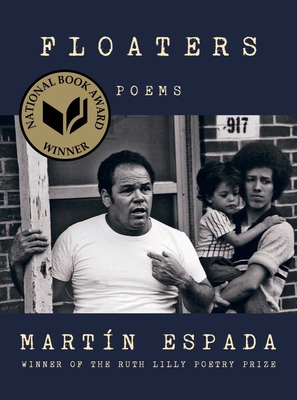 Martín Espada is a poet who stirs in us an undeniable social consciousness, says Richard Blanco. Floaters offers exuberant odes and defiant elegies, songs of protest and songs of love from one of the essential voices in American poetry.

Floaters takes its title from a term used by certain Border Patrol agents to describe migrants who drown trying to cross over. The title poem responds to the viral photograph of Óscar and Valeria, a Salvadoran father and daughter who drowned in the Río Grande, and allegations posted in the I'm 10-15 Border Patrol Facebook group that the photo was faked. Espada bears eloquent witness to confrontations with anti-immigrant bigotry as a tenant lawyer years ago, and now sings the praises of Central American adolescents kicking soccer balls over a barbed wire fence in an internment camp founded on that same bigotry. He also knows that times of hate call for poems of love--even in the voice of a cantankerous Galápagos tortoise.

The collection ranges from historical epic to achingly personal lyrics about growing up, the baseball that drops from the sky and smacks Espada in the eye as he contemplates a girl's gently racist question.

Whether celebrating the visionaries--the fallen dreamers, rebels and poets--or condemning the outrageous governmental neglect of his father's Puerto Rico in the wake of Hurricane María, Espada invokes ferocious, incandescent spirits.

Some Things I Still Can't Tell You

Love Is a Dog from Hell

Tongue of a Crow

Aphrodite Made Me Do It, 1

Is There Anything Left for the Rest of Us?

All I See Is You: Poems and Prose on Motherhood

The Epic of Gilgamesh

Waiting on the Word

Love Poems to No One: Romantic Poetry

Theogony and Works and Days

The Practicing Poet: Writing Beyond the Basics

The Sunflower Cast a Spell to Save Us from the Void

The Beautiful Poetry of Donald Trump

Keep Moving: The Journal: Thrive Through Change and Create a Life You Love

Poems: Just Give Me a Cool Drink of Water 'Fore I Diiie/Oh Pray My Wings Are Gonna Fit Me Well/And Still I Rise/Shaker, Why D

Sonnets from the Portuguese

I Hope You Stay

Everything Is Waiting for You

Glory in the Margins: Sunday Poems

Whale Day: And Other Poems

We Hope This Reaches You in Time

A Cup of Christmas Tea