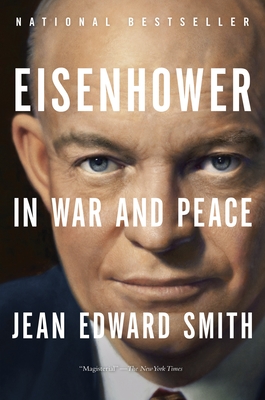 Eisenhower in War and Peace

NAMED ONE OF THE BEST BOOKS OF THE YEAR BY
The Christian Science Monitor - St. Louis Post-Dispatch

In this extraordinary volume, Jean Edward Smith presents a portrait of Dwight D. Eisenhower that is as full, rich, and revealing as anything ever written about America's thirty-fourth president. Here is Eisenhower the young dreamer, charting a course from Abilene, Kansas, to West Point and beyond. Drawing on a wealth of untapped primary sources, Smith provides new insight into Ike's maddening apprenticeship under Douglas MacArthur. Then the whole panorama of World War II unfolds, with Eisenhower's superlative generalship forging the Allied path to victory. Smith also gives us an intriguing examination of Ike's finances, details his wartime affair with Kay Summersby, and reveals the inside story of the 1952 Republican convention that catapulted him to the White House. Smith's chronicle of Eisenhower's presidential years is as compelling as it is comprehensive. Derided by his detractors as a somnambulant caretaker, Eisenhower emerges in Smith's perceptive retelling as both a canny politician and a skillful, decisive leader. He managed not only to keep the peace, but also to enhance America's prestige in the Middle East and throughout the world. Unmatched in insight, Eisenhower in War and Peace at last gives us an Eisenhower for our time--and for the ages. NATIONAL BESTSELLER Praise for Eisenhower in War and Peace

[A] fine new biography . . . [Eisenhower's] White House years need a more thorough exploration than many previous biographers have given them. Smith, whose long, distinguished career includes superb one-volume biographies of Grant and Franklin Roosevelt, provides just that.--The Washington Post Highly readable . . . [Smith] shows us that [Eisenhower's] ascent to the highest levels of the military establishment had much more to do with his easy mastery of politics than with any great strategic or tactical achievements.--The Wall Street Journal Always engrossing . . . Smith portrays a genuinely admirable Eisenhower: smart, congenial, unpretentious, and no ideologue. Despite competing biographies from Ambrose, Perret, and D'Este, this is the best.--Publishers Weekly (starred review) No one has written so heroic a biography [on Eisenhower] as this year's Eisenhower in War and Peace [by] Jean Edward Smith.--The National Interest Dwight Eisenhower, who was more cunning than he allowed his adversaries to know, understood the advantage of being underestimated. Jean Edward Smith demonstrates precisely how successful this stratagem was. Smith, America's greatest living biographer, shows why, now more than ever, Americans should like Ike.--George F. Will

The Naval Academy-A Parent's Ponderings from Home Port: Untying the Bowline on I-Day

Chasing Alexander: A Marine's Journey Across Iraq and Afghanistan

Smarter Not Harder: 17 Navy Seal Maxims to Elevate Critical Thinking and Prosper in Business and Life

The Hill: A Memoir of War in Helmand Province

A Soldier's Journey with The Presence of God

Hitler's Court: The Inner Circle of the Third Reich and After

Wings on My Sleeve: The World's Greatest Test Pilot Tells His Story

Guts 'N Gunships: What it was Really Like to Fly Combat Helicopters in Vietnam

We March at Midnight: A War Memoir

Voices of the Pacific, Expanded Edition: Untold Stories from the Marine Heroes of World War II

The Immortals: The World War II Story of Five Fearless Heroes, the Sinking of the Dorchester, and an Awe-Inspiring Rescue

No Ordinary Dog: My Partner from the Seal Teams to the Bin Laden Raid

The Power of Awareness: And Other Secrets from the World's Foremost Spies, Detectives, and Special Operators on How to Stay Safe and Save Your

One Soldier's Story: A Memoir

No Easy Day: The Firsthand Account of the Mission That Killed Osama Bin Laden

Lafayette in the Somewhat United States

Spymaster: The Man Who Saved Mi6

Hotspur: Sir Henry Percy and the Myth of Chivalry

Helmet for My Pillow: From Parris Island to the Pacific