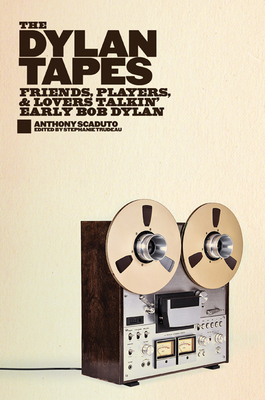 When Anthony Scaduto's Bob Dylan: An Intimate Biography was first published in 1971, the Nobel Prize-winning songwriter, at thirty, had already released some of the most iconic albums of the 1960s, including Highway 61 Revisited and Blonde on Blonde. Scaduto's book was one of the first to take an investigative journalist's approach to its subject and set the standard for rock music biography. The Dylan Tapes, compiled from thirty-six hours of interviews, is a behind-the-scenes look at the making of Scaduto's landmark book--and a close-up encounter with pivotal figures in Dylan's life. These reel-to-reel tapes, found in a box in Scaduto's basement, are a never-bootlegged trove of archival material about Dylan, drawn from conversations with those closest to him during the early years of his career.

In the era of ten-second takes, these interviews offer uncommon depth and immediacy as we listen to friends and lovers recall the Dylan they knew as he created his professional persona and perfected his craft--from folk music, protest songs, and electric rock through the traumatic impact of a motorcycle crash to his later, more self-reflecting songwriting. Echo Helstrom, Dylan's Girl from the North Country, is here, as are Suze Rotolo, who graced the cover of the Freewheelin' album, and Joan Baez, remembering her relationship to Bobby. We hear from Mike Porco, who gave Dylan his first gig in New York City; Sid and Bob Gleason, who introduced him to his hero Woody Guthrie; folk artists from Greenwich Village, like Phil Ochs and Ramblin' Jack Eliot; John Hammond Sr., who gave him his first record contract; plus a host of musicians, activists, folk historians, and archivists--and, of course, Dylan himself.

From these reflections and frank conversations, many published here for the first time, a complex, finely observed picture emerges of one of the best known yet most enigmatic musicians of our time.

The Spirituals and the Blues

Taylor Swift: In Her Own Words

Will the Circle Be Unbroken: The Making of a Landmark Album, 50th Anniversary

On the Bus with Bill Monroe: My Five-Year Ride with the Father of Blue Grass

The Book of Sea Shanties: Wellerman and Other Songs from the Seven Seas

On the Porch: Life and Music in Terlingua, Texas

Woman Walk the Line: How the Women in Country Music Changed Our Lives

Outlaw: Waylon, Willie, Kris, and the Renegades of Nashville

Made in Louisiana: The Story of the Acadian Accordion

Cash on Cash: Interviews and Encounters with Johnny Cash Volume 21

Joni Mitchell: In Her Own Words

The Music of the Statler Brothers: An Anthology

My House of Memories: An Autobiography

A Deeper Blue, 1: The Life and Music of Townes Van Zandt

Wayfaring Strangers: The Musical Voyage from Scotland and Ulster to Appalachia

Jason Molina: Riding with the Ghost

Dolly on Dolly: Interviews and Encounters with Dolly Parton

The Martin Ukulele: The Little Instrument That Helped Create a Guitar Giant

The Faith of Dolly Parton: Lessons from Her Life to Lift Your Heart

The Book of Playground Songs and Rhymes

I.W.W. Songs to Fan the Flames of Discontent: A Facsimile Reprint of the Nineteenth Edition (1923) of the Little Red Song Book

The Book of Song Dances

One Bourbon, One Scotch, One Beer: Three Tales of John Lee Hooker

Johnny Cash: The Redemption of an American Icon

Trains, Jesus, and Murder: The Gospel According to Johnny Cash

Every Night Is Saturday Night: A Country Girl's Journey to the Rock & Roll Hall of Fame

Wichita Lineman: Searching in the Sun for the World's Greatest Unfinished Song

The Bristol Sessions: Writings about the Big Bang of Country Music

¡Canta Conmigo!: Songs and Singing Games from Guatemala and Nicaragua

Then Garth Became Elvis: A Country Music Writer's Journey with the Stars, 1985-2010

Where Rivers and Mountains Sing: Sound, Music, and Nomadism in Tuva and Beyond

Unbroken Circle: A Quotable History of the Grand OLE Opry

The Mayor of Macdougal Street: A Memoir

American Folk Songs for Children in Home, School, and Nursery School: A Book for Children, Parents, and Teachers

Just Jessie: My Guide to Love, Life, Family, and Food

America, the Band: An Authorized Biography

Sea Shanties: The Lyrics and History of Sailor Songs

Rural Rhythm: The Story of Old-Time Country Music in 78 Records

I Never Met a Story I Didn't Like: Mostly True Tall Tales

I'll Be Here in the Morning: The Songwriting Legacy of Townes Van Zandt

Comin' Right at Ya: How a Jewish Yankee Hippie Went Country, Or, the Often Outrageous History of Asleep at the Wheel

Bob Dylan: How the Songs Work

I Got a Song: A History of the Newport Folk Festival

The Pilgrim: A Wall-To-Wall Odyssey

The Birth of the Bakersfield Sound: A Honky Tonk Attitude

He Stopped Loving Her Today: George Jones, Billy Sherrill, and the Pretty-Much Totally True Story of the Making of the Greatest Country Record of A

A Simple Twist of Fate: Bob Dylan and the Making of Blood on the Tracks

And a Voice to Sing with: A Memoir

Walking with Asafo in Ghana: An Ethnographic Account of Kormantse Bentsir Warrior Music

Everything I Need to Know I Learned from Country Music: Life Lessons on Love, Heartbreak, and More from America's Favorite Songs

The Encyclopedia of Country Music

We Never Knew Just What It Was ... The Story of the Chad Mitchell Trio

The Ancient Music of Ireland Arranged for Piano

The Southern Journey of Alan Lomax: Words, Photographs, and Music

South to Louisiana: The Music of the Cajun Bayous 2nd Edition

Kentucky Traveler: My Life in Music

Say It One Time for the Brokenhearted: Country Soul in the American South

Squeeze This!: A Cultural History of the Accordion in America

Nashville: Behind the Curtain

Musics Lost and Found: Song Collectors and the Life and Death of Folk Tradition

He Stopped Loving Her Today: George Jones, Billy Sherrill, and the Pretty-Much Totally True Story of the Making of the Greatest Country Record of a

Hank Williams: The Singer and the Songs

The First 100 Picking Patterns for Guitar: The Beginner's Guide to Perfect Fingerpicking on Guitar

The Bakersfield Sound: How a Generation of Displaced Okies Revolutionized American Music

Music Is Power: Popular Songs, Social Justice, and the Will to Change

Singing in the Saddle: The History of the Singing Cowboy

Looking Back to See: A Country Music Memoir

Another Mickey: Ruminations of a Texas Guitar Slinger

The Texas-Mexican Conjunto: History of a Working-Class Music

Wilcopedia: A Comprehensive Guide to the Music of America's Best Band

Hank Williams: The Singer and the Songs

Music in My Life: Notes From a Longtime Fan