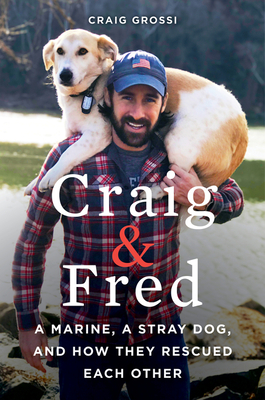 Craig & Fred: A Marine, a Stray Dog, and How They Rescued Each Other

The uplifting and unforgettable true story of a US Marine, the stray dog he met on an Afghan battlefield, and how they saved each other and now travel America together, spreading the message of stubborn positivity.

In 2010, Sergeant Craig Grossi was doing intelligence work for Marine RECON--the most elite fighters in the Corps--in a remote part of Afghanistan. While on patrol, he spotted a young dog with a big goofy head and little legs who didn't seem vicious or run in a pack like most strays they'd encountered. After eating a piece of beef jerky Craig offered--against military regulations--the dog began to follow him. Looks like you made a friend, another Marine yelled. Grossi heard, Looks like a 'Fred.' The name stuck, and a beautiful, life-changing friendship was forged.

Fred not only stole Craig's heart; he won over the RECON fighters, who helped Craig smuggle the dog into heavily fortified Camp Leatherneck in a duffel bag--risking jail and Fred's life. With the help of a crew of DHL workers, a sympathetic vet, and a military dog handler, Fred eventually made it to Craig's family in Virginia.

Months later, when Craig returned to the U.S., it was Fred's turn to save the wounded Marine from Post-Traumatic Stress. Today, Craig and Fred are touching lives nationwide, from a swampy campground in a Louisiana State Park to the streets of Portland, Oregon, and everywhere in between.

A poignant and inspiring tale of hope, resilience, and optimism, with a timeless message at its heart--it is not what happens to us that matters, but how we respond to it--Craig & Fred is a shining example of the power of love to transform our hearts and our lives.

The Naval Academy-A Parent's Ponderings from Home Port: Untying the Bowline on I-Day

Chasing Alexander: A Marine's Journey Across Iraq and Afghanistan

Smarter Not Harder: 17 Navy Seal Maxims to Elevate Critical Thinking and Prosper in Business and Life

The Hill: A Memoir of War in Helmand Province

A Soldier's Journey with The Presence of God

Hitler's Court: The Inner Circle of the Third Reich and After

Wings on My Sleeve: The World's Greatest Test Pilot Tells His Story

Guts 'N Gunships: What it was Really Like to Fly Combat Helicopters in Vietnam

We March at Midnight: A War Memoir

Voices of the Pacific, Expanded Edition: Untold Stories from the Marine Heroes of World War II

The Immortals: The World War II Story of Five Fearless Heroes, the Sinking of the Dorchester, and an Awe-Inspiring Rescue

No Ordinary Dog: My Partner from the Seal Teams to the Bin Laden Raid

The Power of Awareness: And Other Secrets from the World's Foremost Spies, Detectives, and Special Operators on How to Stay Safe and Save Your

One Soldier's Story: A Memoir

No Easy Day: The Firsthand Account of the Mission That Killed Osama Bin Laden

Spymaster: The Man Who Saved Mi6

Lafayette in the Somewhat United States

Hotspur: Sir Henry Percy and the Myth of Chivalry

Helmet for My Pillow: From Parris Island to the Pacific