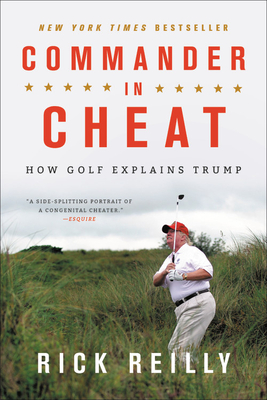 NEW YORK TIMES BESTSELLER
Reilly pokes more holes in Trump's claims than there are sand traps on all of his courses combined. It is by turns amusing and alarming. -- The New Yorker
Golf is the spine of this shocking, wildly humorous book, but humanity is its flesh and spirit. -- Chicago Sun-Times

Every one of Trump's most disgusting qualities surfaces in golf. -- The Ringer

An outrageous indictment of Donald Trump's appalling behavior when it comes to golf -- on and off the green -- and what it reveals about his character.
Donald Trump loves golf. He loves to play it, buy it, build it, and operate it. He owns 14 courses around the world and runs another five, all of which he insists are the best on the planet. He also claims he's a 3 handicap, almost never loses, and has won an astonishing 18 club championships.


How much of all that is true? Almost none of it, acclaimed sportswriter Rick Reilly reveals in this unsparing look at Trump in the world of golf.

Based on Reilly's own experiences with Trump as well as interviews with over 100 golf pros, amateurs, developers, and caddies, Commander in Cheat is a startling and at times hilarious indictment of Trump and his golf game. You'll learn how Trump cheats (sometimes with the help of his caddies and Secret Service agents), lies about his scores (the Trump Bump), tells whoppers about the rank of his courses and their worth (declaring that every one of them is worth $50 million), and tramples the etiquette of the game (driving on greens doesn't help). Trump doesn't brag so much, though, about the golf contractors he stiffs, the course neighbors he intimidates, or the way his golf decisions wind up infecting his political ones.

For Trump, it's always about winning. To do it, he uses the tricks he picked up from the hustlers at the public course where he learned the game as a college kid, and then polished as one of the most bombastic businessmen of our time. As Reilly writes, Golf is like bicycle shorts. It reveals a lot about a man. Commander in Cheat paints a side-splitting portrait of a congenital cheater (Esquire), revealing all kinds of unsightly truths Trump has been hiding.

Make Your Next Shot Your Best Shot: The Secret to Playing Great Golf

Golf Is Not a Game of Perfect

Golf Practice: How to Practice Golf and Take Your Range Game to the Course

A Course Called Scotland: Searching the Home of Golf for the Secret to Its Game

The Anatomy of a Golf Course: The Art of Golf Architecture

Hey, Tiger--You Need to Move Your Mark Back: 9 Simple Words That Changed the Game of Golf Forever

Hole by Hole: A Walk with God on the Golf Course

Fore!: Finding Faith When You're Paralyzed By Your Circumstances

Every Shot Counts: Using the Revolutionary Strokes Gained Approach to Improve Your Golf Performance and Strategy

The Right Side of the Fairway: What golf can teach us about living with cancer

For the Golfer Who Has Everything: A Funny Golf Book

150 Golf Courses You Need to Visit Before You Die: A Selection of the 150 Most Marvelous Golf Courses in the World

Golf Courses: Fairways of the World

Be a Player: A Breakthrough Approach to Playing Better on the Golf Course

Golf in the Kingdom

Mind Over Golf: How to Use Your Head to Lower Your Score

Putting My Way: A Lifetime's Worth of Tips from Golf's All-Time Greatest

Golf's Holy War: The Battle for the Soul of a Game in an Age of Science

Say Yes to Golf with Anyone: A Woman Golfer's Guide to Confidence and Etiquette

The Miniature Book of Miniature Golf [With 2 Balls & Putter]

Bud, Sweat, & Tees: Rich Beem's Walk on the Wild Side of the PGA Tour

The a Swing: The Alternative Approach to Great Golf

For All Who Love the Game: Lessons and Teachings for Women

The Masters: A Hole-by-Hole History of America's Golf Classic

Every Shot Must Have a Purpose: How Golf54 Can Make You a Better Player

Tour Mentality: Inside the Mind of a Tour Pro

How to Play Your Best Golf All the Time

The Second Life of Tiger Woods

The Inner Game of Golf

Putting Out of Your Mind

Stuff Every Golfer Should Know

Golf My Way: The Instructional Classic, Revised and Updated

The 100-Year Golfer: 7 Arts for a Lifetime with the Game

The Masters: Golf, Money, and Power in Augusta, Georgia

Extraordinary Golf: The Art of the Possible

The Mulligan: A Parable of Second Chances

Yoga for Golfers: A Unique Mind-Body Approach to Golf Fitness

The Stack and Tilt Swing: The Definitive Guide to the Swing That Is Remaking Golf

7 Strokes in 7 Days: Quick and Easy Break-Through Mental Training That Will Revolutionize Your Golf Game and Life

How to Play Your Best Golf: Strategies from a Tour Pro

18 in America: A Young Golfer's Epic Journey to Find the Essence of the Game

Golf Is a Game of Confidence

Chicken Soup for the Soul: The Golf Book: 101 Great Stories from the Course and the Clubhouse

The Game for a Lifetime: More Lessons and Teachings

Arnold Palmer's Success Lessons: Wisdom on Golf, Business, and Life from the King of Golf

The Downhill Lie: A Hacker's Return to a Ruinous Sport

The Experts at Dummies

Your Best Golf Begins After 50: Make Your Back Nine Your Best Nine

Good Walks: Rediscovering the Soul of Golf at Eighteen of the Carolinas' Best Courses

Bless.ed One: From a shantytown in Kabwé, Zambia, to the first Black African in the U.S. Open

The Grand Slam: Bobby Jones, America, and the Story of Golf

And If You Play Golf, You're My Friend: Furthur Reflections of a Grown Caddie

The Machine: A Hot Team, a Legendary Season, and a Heart-Stopping World Series: The Story of the 1975 Cincinnati Reds

Favorite Golf Quotations: Wisdom & Inspiration from Legends of the Greatest Game Ever

A Good Walk Spoiled: Days and Nights on the PGA Tour

One Putt: The Ultimate Guide to Perfect Putting

Golf Rules and Etiquette for Dummies

Building of a Champion: How I became a champion in life: The Avis Brown-Riley Story

Making of the Masters: Clifford Roberts, Augusta National, and Golf's Most Prestigious Tournament

Planet Golf: The Definitive Reference to Great Golf Courses Outside the United States of America

The Battle for Augusta National: Hootie, Martha, and the Masters of the Universe

Ray Billows - The Cinderella Kid: The unlikely and colorful story of a world-class amateur golfer

Hank Haney's Essentials of the Swing: A 7-Point Plan for Building a Better Swing and Shaping Your Shots

The Secret of Golf: The Story of Tom Watson and Jack Nicklaus

The Keys to the Effortless Golf Swing

The Physics of Golf

The Murder of Marion Miley

Your 15th Club: The Inner Secret to Great Golf

One Move to Better Golf (Signet)

Forbidden Fairways: African Americans and the Game of Golf

The Golfer's Guide to Pilates: Step-By-Step Exercises to Strengthen Your Game

Play Strategic Golf: Course Navigation: How To Position Yourself To Score Like The Pros

The Legend of Bagger Vance: A Novel of Golf and the Game of Life

Secrets of the Great Golf Course Architects: The Creation of the World's Greatest Golf Courses in the Words and Images of History's Master Designers

Golf: How to Consistently Break 90

A Course of Their Own: A History of African American Golfers

Grounded Golf: Steady Performance Under Pressure for The Female Golfer

Your Short Game Solution: Mastering the Finesse Game from 120 Yards and in

Little Book of Golf: Glorious Quotes from the Greats of the Game

Why You Suck at Golf: 50 Most Common Mistakes by Recreational Golfers

Sand and Golf: How Terrain Shapes the Game

Teeing Up the Day

The Immortal Bobby: Bobby Jones and the Golden Age of Golf

The 5 Mental Secrets of Golf

The Unwritten Rules of Golf